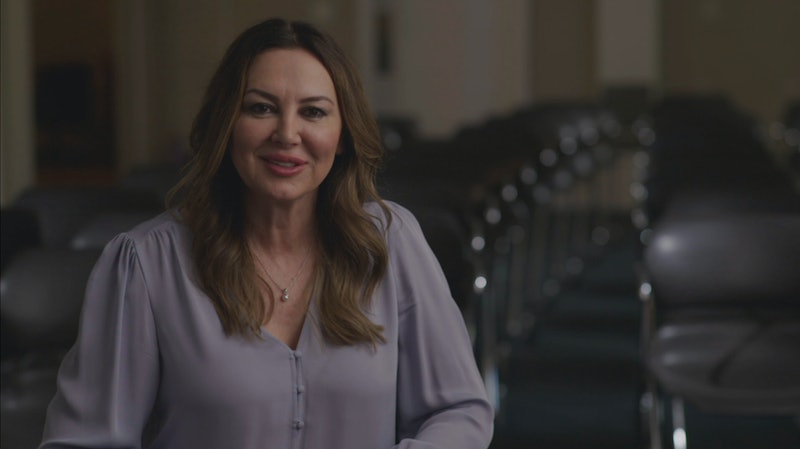 According to former members, Remnant Fellowship Church was founded upon control. Previous congregants allege in HBO Max’s docuseries The Way Down that leader Gwen Shamblin Lara preached extreme obedience: to her, to God, and to her controversial Weigh Down diet, which instructs followers to only eat when prompted by hunger pains. But Natasha Pavlovich was one person Shamblin could not control. (Shamblin has refuted claims that she practiced authoritarianism and that the Weigh Down diet is unhealthy).

“Gwen Shamblin was not expecting for me to be such a strong person who stands up for herself. She was expecting me to go away like all the others,” Pavlovich says in the show. “Surprise, surprise. I ain’t going nowhere.”

Though Pavlovich was never a member of the church herself, she was tied to Remnant via Joe Lara, whom Shamblin married in 2018 shortly after divorcing her first husband. Lara and Pavlovich met in 1984 in an acting class. At the time, he was around 21 while she was just 16. The two dated on and off for several decades. “When you see someone who’s so good-looking and you want to be with them, you push away the red flags,” Pavlovich says of their relationship in The Way Down.

On Nov. 29, 2010, the couple welcomed a child. Shortly afterward, they moved to Nashville so that Lara could pursue his dreams of becoming a country music star. Pavlovich describes this decision as part of a deal the couple made with each other: Lara had until their daughter reached kindergarten to pursue his music career, and if it didn’t pan out, they would move to Chicago, where Pavlovich had family and both she and Lara could find work. When that time finally arrived in 2015, Pavlovich says Lara refused to move, ultimately filing a police report accusing her of sexually abusing their 4-year-old daughter in order to retain custody. Interviews between their daughter and doctors revealed that Lara was lying, she adds, and by this point, her relationship with Lara was irreparable.

Lara met Shamblin while working as a handyman in Tennessee (the Remnant Church is located in Brentwood, about 10 miles outside of Nashville). He reportedly had a history of dating women who could support his lifestyle, and former Remnant Fellowship members speculate that his marriage to Shamblin was opportunistic: He got access to her money and power (and the church’s recording studio), while she got a husband who was publicly supportive of her (her previous husband, David Shamblin, wasn’t as involved in the church).

After Lara filed the police report, he and Pavlovich engaged in a contentious legal battle over the custody of their daughter. Pavlovich eventually chose to represent herself, having already spent $200,000 on lawyers. In December 2020, a judge decided that she and Lara would retain 50/50 custody. His lawyers, who also represent Remnant Fellowship, filed a motion in limine early on that prohibited Pavlovich from presenting any evidence about Remnant due to freedom of religion.

Pavlovich made plans to appeal the 2020 ruling, which would make the case public record, and in 2021, a judge ruled that she be made the primary parent. She was awarded sole decision-making in regard to her daughter’s religion, education, extracurricular activities, and non-emergency medical care, among other things. Concerned that Remnant church members could be filming her or following her, she said she intended to move out of her neighborhood once her daughter finished school.

On May 29, 2021, Lara, Shamblin, and five other Remnant leaders were killed in a plane crash. Lara is believed to have been piloting the plane. Though Pavlovich hasn’t publicly commented on his death, she had raised concerns about his ability to fly a plane prior to the accident. The second part of The Way Down picks up after the climactic crash, and she recounts the terrifying hours during which she feared her daughter had been on the plane with her father.

“I need to know who is on that airplane!” she says in a recorded 911 call. “I left a message for the father. I said this is an emergency. Call me immediately.”

While Pavlovich was eventually able to get in contact with Lara’s mother, she said her former mother-in-law was evasive about her daughter’s whereabouts. Her reunion with her daughter came later, after being escorted by police to “a mansion” where all the kids who had lost parents in the crash were. “I had to keep it together, but I’ll tell you, I never hugged her as hard or as long as that moment,” Pavlovich says in the documentary through tears. “I almost never wanted to let her go again.”

In the months since the crash, and subsequent release of the HBO Max documentary, Pavlovich has continued to set her sights on telling her version of the truth. Pavlovich plans to release her own memoir following the second season of The Way Down docuseries and says looks forward to sharing her story.