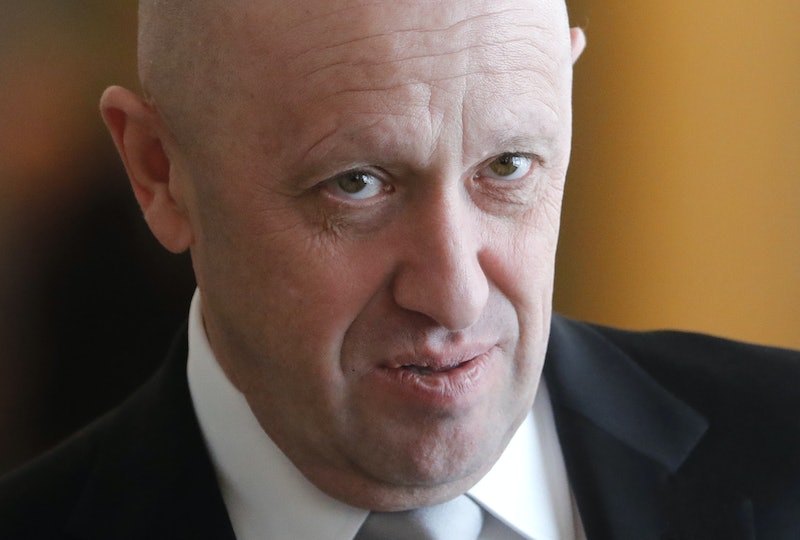 The two-part HBO documentary Agents of Chaos dives into the world of Russian troll farms and their effect on the 2016 election. Directed by Alex Gibney, the doc is the result of years of research into how a covert Russian organization called The Internet Research Agency (IRA) used social media to spread chaos and misinformation in the U.S. over the past decade. But as the film details, Russian President Vladimir Putin could never finance or authorize such an undertaking himself. The boss behind the IRA was a man named Yevgeny Prigozhin. How did he do it? What was his "real" job? And where is Yevgeny Prigozhin now?

Agents of Chaos describes Prigozhin as "a former hot dog salesman who worked his way up the Kremlin food chain," who is "well known in Russia for his close ties to Putin." Little is known about his background, except that he was jailed at 18 years old for theft and spent nine years in a Soviet prison. He then got into fast food, where he made a name for himself as the owner of Blin Donald's, a McDonald's knockoff, and became a head honcho in Russia's school lunch program via his company, Concord Catering. In Russia, he's known as "Putin's chef," because he's the one who literally serves Putin his meals wherever he is. "Prigozhin kept failing up," Gibney says in the doc. But Prigozhin's massive businesses and enormous wealth were used for more nefarious purposes, Agents of Chaos reports.

According to CNN, through Concord Catering and perhaps at the behest of Putin himself, Prigozhin funneled some of his massive wealth into the IRA, which in turn used an extensive social media campaign to boost support for Putin in Russia, interfere in the uprisings in Ukraine in 2013, and eventually meddle with the 2016 U.S. election, as Agents of Chaos explores.

The Internet Research Agency was shut down in 2018 after U.S. Cyber Command blocked its Internet access in the U.S. Prihozhin himself was indicted and sanctioned in February of 2018 when The Justice Department charged 13 Russians and three companies in "a sprawling indictment that unveiled a sophisticated network designed to subvert the 2016 election and to support the Trump campaign," The New York Times writes.

"According to the indictment," the Times details, "Mr. Prigozhin, 56, controlled the entity that financed the troll factory, known as the Internet Research Agency, which waged 'information warfare against the United States' by creating fictitious social-media personas, spreading falsehoods and promoting messages supportive of Donald J. Trump and critical of Hillary Clinton. He has denied involvement."

While the IRA is no longer, that doesn't mean Prigozhin isn't still spreading false information all over the internet. As CNN writes, "In 2016, much of the trolling aimed at the U.S. election operated from an office block in St. Petersburg, Russia...in this election cycle, at least part of the campaign has been outsourced — to trolls in the West African nations of Ghana and Nigeria." And in October of 219, Facebook closed networks of accounts that were targeting eight African countries. "Although the people behind these networks attempted to conceal their identities and coordination, our investigation connected these campaigns to entities associated with Russian financier Yevgeny Prigozhin," the company wrote in a statement.

Putin's chef may have been indicted in the U.S... but it seems he's still finding plenty of ways to meddle in the 2020 election.

More like this
The 'Gossip Girl' Reboot Creator Is “Looking For A New Home” To Air A Potential Season 3
By Brad Witter
Who Is "Daddy" Pedro Pascal Dating? People Are Thirsting Over The 'Last Of Us' Star
By Alyssa Lapid
Bill & Frank’s 'The Last Of Us' Episode Has Twitter Emotionally Wrecked
By Alyssa Lapid
Here’s What Happens To Bill & Frank In 'The Last Of Us' Video Game
By Brad Witter
Get Even More From Bustle — Sign Up For The Newsletter
From hair trends to relationship advice, our daily newsletter has everything you need to sound like a person who’s on TikTok, even if you aren’t.