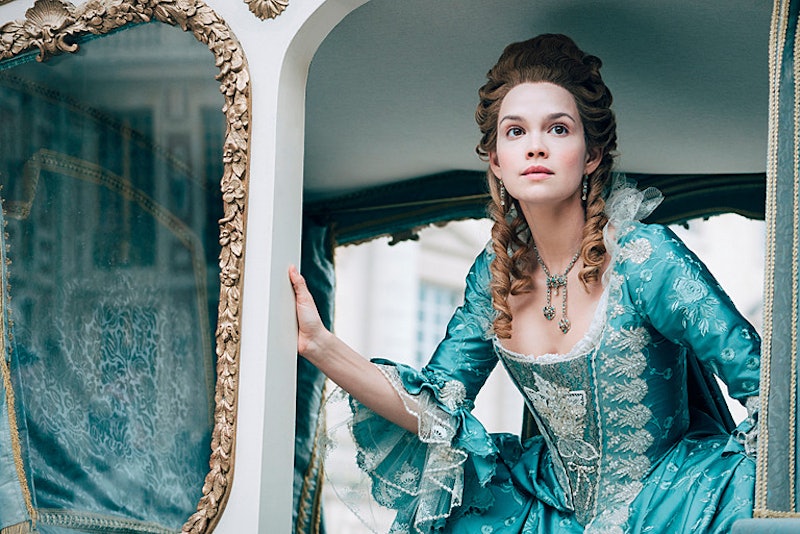 This year’s Christmas TV schedule is packed with must-see shows and specials, with the BBC saving some of its best and highly-anticipated dramas until the end of the year, including their period drama Marie Antoinette, starring Emilia Schüle and Louis Cunningham. Written by The Favourite’s Deborah Davis, this eight-part series will premiere on Dec. 29 and features stunning period costumes and gorgeous hair and make-up set in lavish palaces. But where exactly was BBC’s Marie Antoinette filmed?

Much of the series was filmed on location at the French palaces and estates where Antoinette actually lived, most notably the Palace of Versailles. Filming also took place at the Château de Bagatelle, the Château de Rambouillet, the Château de Fontainebleau, and the Château de Vaux-le-Vicomte, all of which are open to visitors today.

Lésigny, the Champs-Élysées in Paris, and Voisins-le-Bretonneux were used as additional filming locations, as well as Bry-sur-Marne studios, where sets took two and a half months to build, as production designer Pierre Queffelean told Variety. Many of the Versailles interiors were filmed here, as the palace was much dirtier in the 1700s. “Today, it’s very clean, painted in white with bright golds,” Queffelean explained. “But you have to think back in that time, there were between 2,500 and 3,000 people who lived there constantly.” As a result, the production team reconstructed many of the palace’s apartments and corridors to replicate the time period more accurately.

Filming was split between the studio and on-location shoots, with much time spent at the actual Palace of Versailles to “take best advantage of the sculpted gardens, the marble courtyards, and the iconic hall mirror that were simply not replicable anywhere else,” per Variety. While most of the production was filmed on set, director Pete Travis noted how difficult it will be for viewers “to tell the difference between the real places and the sets” because “they’re lit the same, the camera movement is the same, and everything feels like it’s real,” he explained. “That’s what we really wanted to do.”