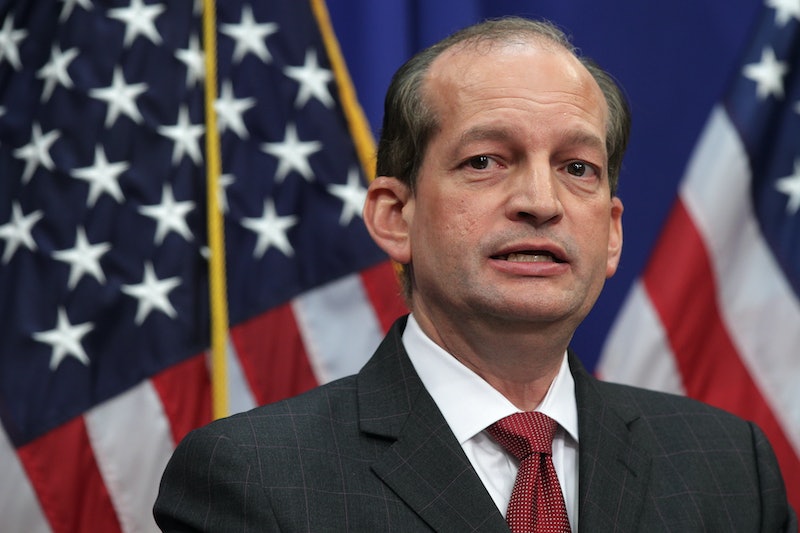 On July 12, 2019, Alexander Acosta stepped down as President Trump's Labor Secretary as criticism mounted over how he mishandled Jeffrey Epstein's 2008 sex trafficking case, detailed in Netflix's new four-part docuseries Jeffrey Epstein: Filthy Rich. Despite overwhelming evidence against Epstein, the then-U.S. Attorney of Florida granted Epstein what The Miami Herald characterized as the "deal of a lifetime." Acosta is now laying low, and maintains via a statement in Filthy Rich that his actions in regard to the Epstein case were appropriate.

The docuseries explores how Epstein's wealth and power benefitted him during and after the 2008 case, for which he ultimately pled guilty to soliciting a minor for prostitution. Epstein was accused of pedophilia and running a sex trafficking ring alongside alleged co-conspirator Ghislaine Maxwell in a 53-page indictment compiled by FBI agent Nesbitt Kuyrkendall, who had 34 victims willing to testify along with solid evidence of how Epstein transported victims. (Maxwell has denied all accusations against her.) It seemed to be an airtight case that would ensure Epstein was put away for life.

After they were ordered to turn over their casework to Acosta's office, however, former Palm Beach police chief Michael Reiter told documentarians that they heard almost nothing for two years.

Suddenly, in a secretive and rushed hearing, Acosta granted Epstein a non-prosecution deal that allowed Epstein to serve only 13 months in county jail in exchange for pleading guilty to two counts of prostitution. Epstein and his alleged co-conspirators were granted immunity, and Epstein's prison sentence wasn't really one at all: he was allowed to leave the building and go to work six days a week.

When Acosta became Trump's new Secretary of Labor in 2017, scrutiny over how he handled the Epstein case only intensified. It blew wide open when Epstein was arrested in 2019 for sex trafficking — the very crime Acosta's office dismissed him for a decade prior. On July 12, Acosta announced his resignation from the cabinet position.

“I wanted to help [the accusers],” Acosta claimed during an hour-long session with reporters in 2019. “That is why we intervened. And that’s what the prosecutors of my office did — they insisted that he go to jail and put the world on notice that he was and is a sexual predator.”

Per The Washington Post, Acosta claimed that his team endured "a year-long assault" by Epstein's "army of legal superstars," which led them to cut the deal. Acosta's top deputy, Jeffrey Sloman, also noted that “most of Epstein’s victims were terrified to cooperate against him," making it difficult for them to see how they could properly bring Epstein to justice if he went to trial.

Attorneys for Epstein's accusers push back on this in Filthy Rich, though. Jack Scarola said that Acosta's plea agreement was "inexplicable" to him. "In 45 years of practice, I've never heard of anyone entering into a plea agreement that not only granted immunity to the target of the investigation, but handed out get-out-of-jail-free cards to every one of that person’s co-conspirators."

Since his July 2019 resignation, Acosta has kept out of the headlines and the public eye.

More like this
The Dog & His Handler In 'Gunther’s Millions' Are Worth, Well, Millions
By Gretchen Smail
You Might Want To Rewatch This Key 'On My Block' Scene To Understand 'Freeridge'
By Grace Wehniainen
Ashton Kutcher Wants Danny Masterson “To Be Found Innocent” In Rape Retrial
By Jake Viswanath
'The Queen’s Gambit' Season 2 Tweet Wasn’t From Anya Taylor-Joy
By Mary Kate McGrath, Jack Irvin and Grace Wehniainen
Get Even More From Bustle — Sign Up For The Newsletter
From hair trends to relationship advice, our daily newsletter has everything you need to sound like a person who’s on TikTok, even if you aren’t.