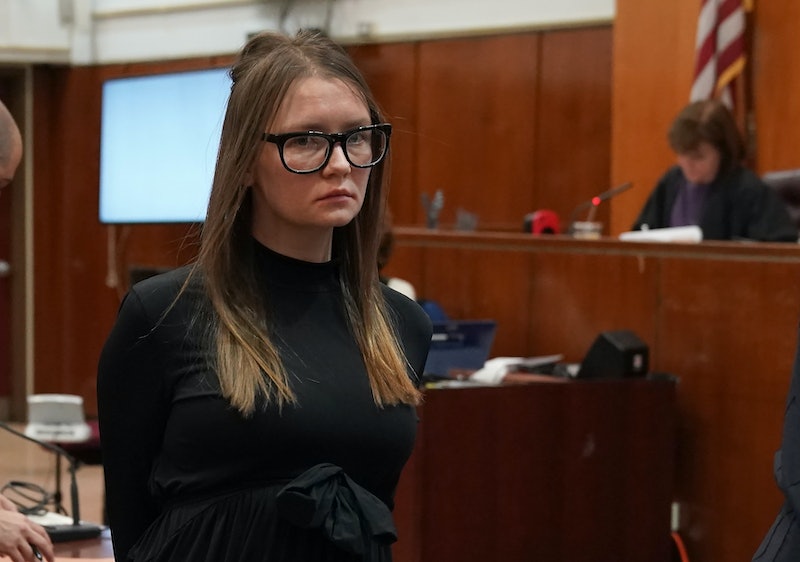 After nearly four years in prison on multiple charges of grand larceny, Anna Sorokin was released in February 2021. One month later, she was taken into custody at an ICE detention center in Orange County, New York — 90 minutes from Manhattan where she spent five years presenting herself as the German heiress Anna Delvey. She’s been in immigration limbo since then, and will remain in custody when Inventing Anna — the upcoming Netflix show dramatizing her life — premieres on Feb. 11.

Sorokin had plenty to say about the show in a recent essay for Insider. Though she said she won’t be able to watch the series anytime soon due to her circumstances — and isn’t necessarily gunning to see it anyway — it wasn’t made without her approval. Julia Garner, who plays Sorokin, and series producer Shonda Rhimes both visited her in prison while making Inventing Anna. She also received $320,000 from Netflix for the rights to her story. “For a long while, I was hoping that by the time Inventing Anna came out, I would've moved on with my life,” Sorokin explained in her essay. “I imagined for the show to be a conclusion of sorts summing up and closing of a long chapter that had come to an end.”

Sorokin was apprehended by ICE for overstaying her U.S. visa. She’s hired a lawyer, Audrey A. Thomas, who has appealed orders that Sorokin be deported and applied for her to be granted asylum. But ICE has refused to release Sorokin from custody while the case is pending. So there she sits along with 20,000 other people trying to navigate an opaque immigration system. “The court finds that, even if released from detention and ordered to report regularly to ICE, the respondent would have the ability and inclination to continue to commit fraudulent and dishonest acts," an immigration judge ruled about Sorokin. Asks Sorokin in her essay: “Sorry, am I on trial for this again?”

Sorokin goes on to enumerate several issues she has with her detention facility, which the Immigrant Rights Clinic at New York University’s School of Law recently identified for its abusive and racist practices. She calls the place “a petri dish” and alleges inadequate medical care. “Even if I were to pull some strings and make it happen, nothing about seeing a fictionalized version of myself in this criminal-insane-asylum setting sounds appealing to me,” Sorokin writes of Inventing Anna.

Paul O'Dwyer, a New York-based immigration attorney, told Insider in October 2021 that it's possible Sorokin could be released from jail while her case is pending, but it’s unlikely. "There's a discretionary component to asylum applications, meaning that even if she was eligible for it, the judge still has discretion to deny it on the basis that she doesn't have good moral character, or that she has a history of bad acts, which make her undesirable," O'Dwyer said.

Sorokin, for her part, has maintained her innocence, insisting that she had a legitimate business plan that fell apart and calling prison a “huge waste of time.”