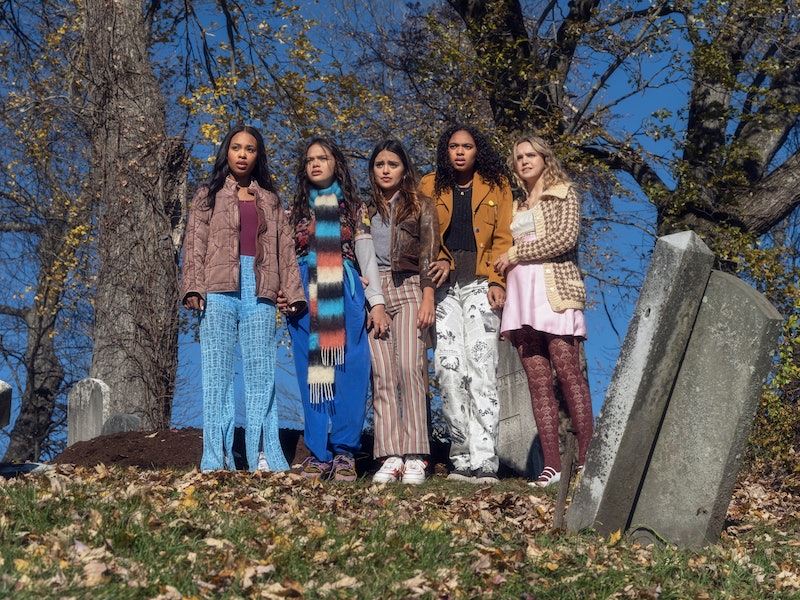 Remember A? The vindictive blackmailer from Pretty Little Liars who tormented high schoolers Spencer, Hannah, Emily, and Aria for seven years? In the original show, multiple people took the mantel of “A” from season to season. There was even an “Uber A” and “A’s Army.” Eventually, A turned out to be Cece Drake, Alison’s sister.

Well, in HBO Max’s reboot, Pretty Little Liars: Original Sin, A is back, armed and dangerous. The new masked A of Millwood is tormenting another set of women — Imogen (Bailee Madison), Tabby (Chandler Kinney), Noa (Maia Reficco), Faran (Zaria), Mouse (Malia Pyles) — and unlike Rosewood’s villain, this A is scarier than ever. First, A looks straight out of a horror movie with a slasher mask, unkempt hair, and a construction jumpsuit. Plus, this new iteration is much more gruesome.

“Our A is very vindictive, brutal, cutthroat, and has zero remorse or fear of pushing the limits to the farthest that it can go,” Bailee Madison tells Bustle. “There’s nothing gentle about our A. If our A is out to get you, your life is in A’s hands.” She even adds that there’s “no rhyme or reason” to the masked villain’s victims. “If A wants to kill, A’s gonna be brutal,” she says. A has already left a trail of murder victims in the first two episodes alone. Luckily, audiences will get to know who the serial murderer is very soon.

According to Original Sin creators Roberto Aguirre-Sacasa and Lindsay Calhoon, there’ll be none of the years-long guesswork like in the original. “Lindsay and I [are] both storytellers. We love beginnings, middles, and ends. So we decided early on that whatever mysteries we introduced in the first few episodes of Season 1, by the end of the season, they may not have completely concluded, but they all needed at least a satisfying conclusion,” Aguirre-Sacasa tells Bustle. “And the big mystery that started in Episode 1 is ‘Who is A?’ So I think by the end of the season, you will have a very clear and hopefully satisfying answer to that question.”

The question of “Who is A?” also takes on another layer in this new PLL iteration. In the original, the Liars were already friends and committed their “sins” and lies — at least in their tormentor’s eyes — together. But in the town of Millwood, the Liars’ moms seem to be connected to their Big Bad’s ultimate vendetta. “These girls are thrown together very suddenly by A, and they don’t really know what’s going on, and they have to uncover the mystery of why A is targeting them specifically and why they’re the ones being tormented,” Chandler Kinney, who plays horror-film-buff Tabby, tells Bustle. That’s definitely an added dimension that the PLL fandom has to consider when sleuthing for clues as to A’s identity. Here are some of our guesses as to who A is.

Wes is Tabby’s boss at The Orpheum, Millwood’s local cinema. He’s a few years older than the Liars and, like Tabby, is obsessed with films — horror included. It’s easy to dismiss Wes from the list since he’s in the car with Tabby when she first spots A. But unlike when the rest of the Liars first spot the show’s main villain from afar, A didn’t leave and was just standing there. It could have been a decoy to throw Tabby off his scent. The moment when he tries to go down and confront the masked man? It could’ve been an act. Plus, why did he stop in that spot anyway? Maybe that was part of his plan all along.

Plus, he already seems manipulative enough — dangling a recommendation to NYU film professors in front of Tabby to get her to hang out with him. Maybe he has a connection to the past, or perhaps, as a horror fan, he’s hooked on the idea of making children pay for their parents’ sins. If he is A, he probably also gets a kick out of Tabby’s horror knowledge and her picking up on what movie films he’s referencing in his attacks.

It may not seem feasible (at first) for Sheriff Beasley (Eric Johnson) to be A because the villain does push Karen to her death, but... don’t put it past the Sheriff. He’s keeping secrets, and fans already know he’s not happy in his marriage. Maybe the twins aren’t even his. Or maybe he has a mysterious connection to the town’s past.

The sheriff also shares a house with the twins, so he could’ve easily put the dead rat in Karen’s bag and the razorblade in her ballet shoes. Plus, A walks like he regularly wears boots and authority.

If it isn’t the principal, it could be one of the teachers. Madame Ghiri is giving Suspiria vibes, and she seems to have it in for Faran. Plus, she can access Karen’s ballet shoes if Karen left them in the locker.

In Episode 4, a new potential A makes a blink-and-you-miss-it appearance. In one of the flashback scenes, a young Marjorie (Noa’s mom) gets caught smoking by a school employee, and she immediately puts the blame on Angela. She gets off the hook while Angela is pulled aside by the employee. It’s a behavior Marjorie keeps well into adulthood when she makes Noa take the blame for her drug addiction — one that A hates.

But the man who catches the two high schoolers smoking may be a bigger character. One, his name is Freddy, and the show’s creators did say they were definitely inspired by slasher movies, particularly Wes Craven's Nightmare On Elm Street, whose murderous villain is named Freddy Krueger. But if that’s not a suspicious enough coincidence, Freddy’s uniform is a boiler suit, eerily similar to A’s uniform of choice.

When A finally targets Marjorie and Noa next, A texts the young Liar, “She never learned her lesson. Mommy was going to throw you under the bus again, just like she did to Angela Waters.” It leaves him the only character so far who knows first-hand how the Liars’ moms treated Angela, making him a prime suspect.

This post will be updated with more information as new Pretty Little Liars: Original Sin episodes are available.

This article was originally published on July 28, 2022