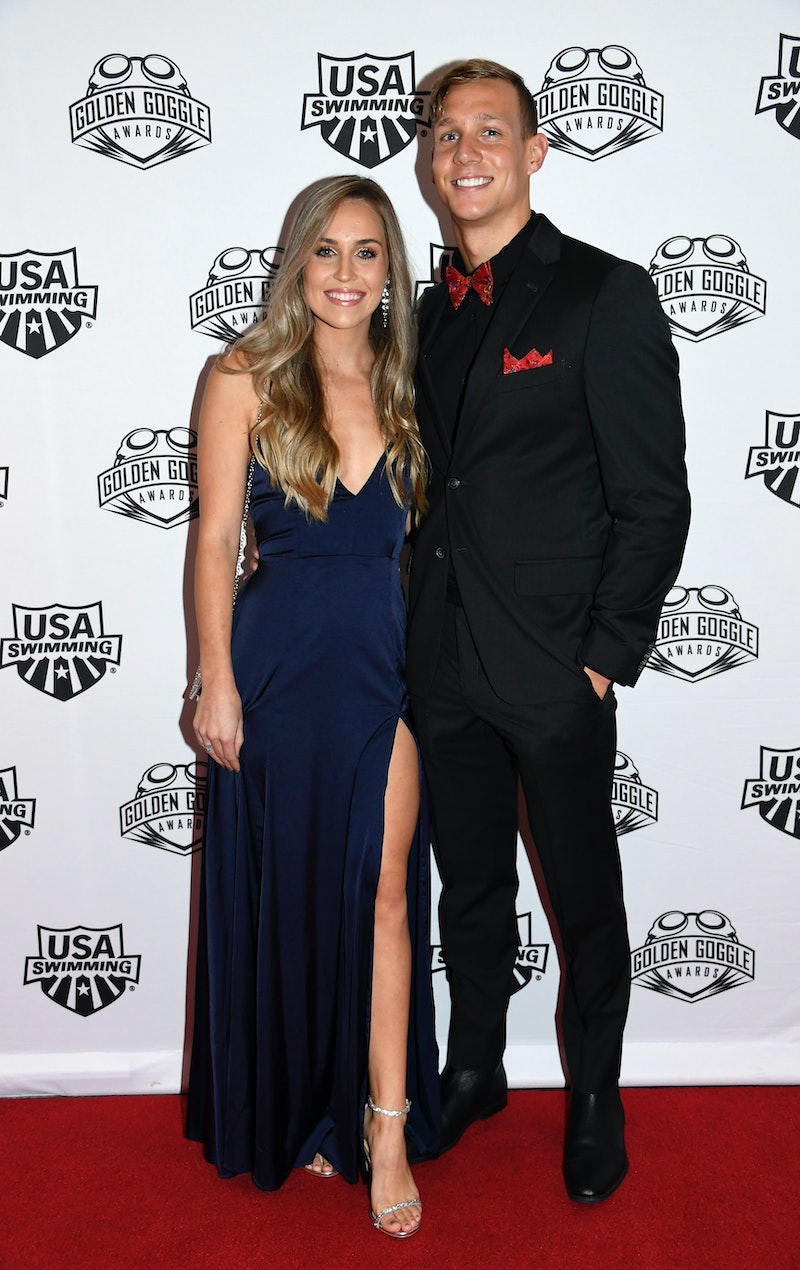 If you’ve been keeping up with Olympics swimming, Caeleb Dressel’s name might sound pretty familiar to you by now. The 24-year-old swimmer has already won two gold medals in Tokyo for his freestyle skills, and it’s not even his first time at the international competition (he earned his first two golds at Rio in 2016). While Caeleb has been busy smashing Olympic records in the water, his wife, Meghan Dressel, has been watching from afar since families can’t spectate in person at this year’s event. But that doesn’t seem to be a problem for a couple who’s been cheering each other on since their high school days, when they swam together on the same team — or their college days, when they branched out to rival Florida colleges.

While Meghan may not be swimming competitively anymore, her own academic and professional accomplishments are just as worthy of an Olympic-level celebration. As you continue to keep up with the couple and the splashing second half of the games, here is everything you should know about Caeleb, Meghan, and their supportive relationship.

Caeleb And Meghan Married In February

Even if Caeleb weren’t competing on the international stage, it would still be a milestone year for the Dressels. The pair got married on Valentine’s Day weekend, an experience chronicled on the couple’s respective Instagrams. After five months of married life, Meghan wrote, she’s “all the more in love with my best friend.”

Later in February, Caeleb shared a photo of the pair posing in front of their very own new mailbox and noted that with homeownership, his “woodworking stats are slowly increasing.” Just another skill to add to his impressive resume, of course.

They’ve Been Together Since High School

Caeleb and Meghan grew up in Florida and swam for the same team before going off to two rival colleges — the University of Florida for Caeleb and Florida State University for Meghan. Fortunately, their budding relationship (which comprised familiar landmark moments, like homecoming and an adorable promposal) didn’t end with graduation.

Caeleb and Meghan might be years away from their high school days, but their social media presence is as silly and fun-loving as ever. In June, for example, Meghan shared a video of the pair recreating High School Musical’s “Get’cha Head in the Game” with Caeleb playing Troy and Meghan playing — wait for it — the basketball.

Despite the laughs on land, Caeleb’s commitment to Olympic prowess is as serious as could be. He earned his first gold during a 2016 Rio relay (an honor he shared with the legendary Michael Phelps), while his 2021 Tokyo win marked his first individual gold. In a recent interview with Today, though, Caeleb revealed the medals maybe don’t mean as much to him as they do his supporters. “It’s not about that for me,” he said. “I don’t keep any of that stuff. You guys should be jealous. I get to do the fun part, which is racing ... I don’t need a piece of metal to remind me of that.”

True to his word, Caeleb immediately gave the gold medal from his 2021 relay to teammate Brooks Curry, who didn’t get to swim but helped secure the team’s spot in qualifiers.

As Caeleb racked up gold medals throughout his career, Meghan was busy earning degrees — three of them, to be exact. She recently finished her journey toward marriage and family therapy at the University of Florida, as she wrote on Instagram. “The ways in which I would be challenged, pushed, and stretched has lead to growth in places and ways I never imagined,” she shared.

Here’s to the happy (and very decorated) couple making big moves on the water and dry land alike.