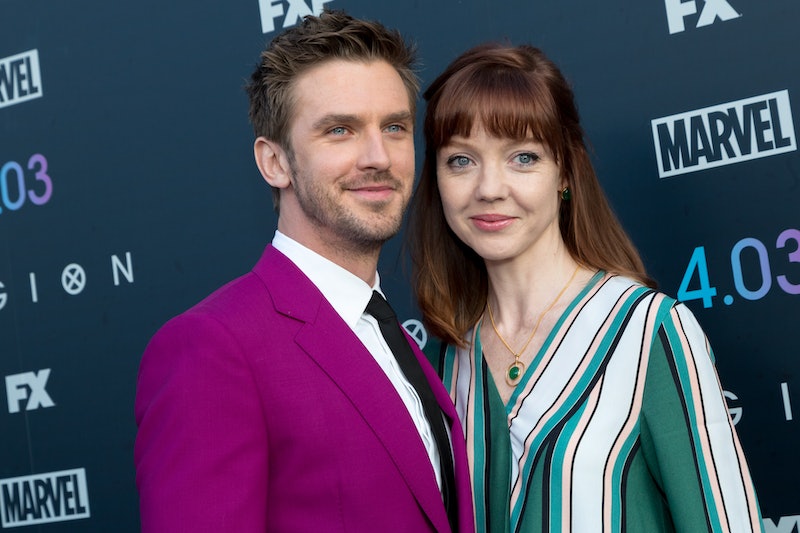 Dan Stevens knows a thing or two about being the perfect life partner. In September 2021, the former Downton Abbey actor starred in I’m Your Man, a comedy sci-fi film about a humanoid robot named Tom who was designed to be everything the main protagonist, Alma, might need. In real life, however, the 39-year-old entertainer found his match, Susie Hariet, without the use of artificial intelligence.

Since leaving Downton Abbey in 2012, Stevens has been booked and busy. Some of his most recent jobs apart from I’m Your Man have included hits such as Eurovision Song Contest: The Story of Fire Saga in 2020 and the HBO Max series The Prince in 2021. Soon he’ll star alongside Julia Roberts in Gaslit, a series about the Watergate scandal on Starz.

Stevens is a pro at falling in love onscreen, having made viewers swoon from his romance-fueled performances as Matthew Crawley in Downton Abbey, the Beast in Beauty and the Beast, Tom in I’m Your Man, and more. Perhaps his performances are so convincing because he has some real-life experience of love at first sight to draw from, as Stevens and Hariet have been married for 13 years now.

To learn the complete timeline of Stevens and Hariet’s relationship, as well as what the couple and their three children are up to now, keep reading.

The couple first met in 2006 while they were performing at different theaters in London. “I was getting my kit off every night at the Crucible doing The Romans in Britain, and she was appearing in a musical,” Stevens told The Telegraph in 2011. “We met and it was pretty instant.”

In 2009, the lovebirds tied the knot while Hariet was six months pregnant with their first child, a daughter named Willow. “I’m lucky to be married to someone who entirely gets what I do,” the actor told the paper. “She is totally sympathetic to the actor’s life. Her own mother was an actress, so she sort of grew up with it.”

It’s worth noting that Susie Hariet is also an entertainer. According to The Telegraph, she’s a “jazz vocalist-turned-singing teacher.” She has also dabbled in acting. Per IMDB, her most recent film project was 2010’s Forget Me Not.

2012: They Moved To New York To Raise Their Kids

Although Hariet was involved in a few movies, she prioritized supporting her husband’s bustling acting career and expanding their family. In 2012, Observer reported that she was on set while Stevens filmed the romantic drama Summer in February. At the time, Hariet was pregnant with their second child, a son named Aubrey, and “would stand off to one side with her daughter and watch her spouse perform steamily romantic scenes.” According to Heavy, Stevens reportedly told The Australian, “I’ve been so lucky in that my wife has been incredibly understanding and supportive. Had that not been the case, things might not have been quite so easy.”

The couple reportedly raised their kids in Brooklyn Heights, New York, which was a major change from where they previously resided in London. “This feels big,” Stevens told the Observer in 2012 of their move. “Uprooting the family and coming here has been a sort of seismic shift.” Later that year, however, the actor told Broadway.com that his family was “absolutely loving” New York. “We’ve been enjoying the park and the museums,” he said. “We took a trip on the Staten Island Ferry today to see, as my daughter calls it, the ‘Statue of Libertry.’”

Their migration to the Big Apple wasn’t the only time that Hariet uprooted her life for family. The mother of three, who is seven years Stevens’ senior, is originally from South Africa, a country their family holds dear. “We love coming out to South Africa, it’s our second home,” the Legion actor told South Africa’s Channel 24 in 2012. “We spend quite a lot of time in Jo’burg.”

In 2016, the couple welcomed their third child, a daughter named Eden. And in the time since, Stevens and Hariet have also spent a lot of time on the red carpet. The Beauty and the Beast premiere, the Night at the Museum: Secret of the Tomb premiere, and the Legion premiere are just some of the star-studded events they’ve attended together over the years. Most recently, they were photographed at the Mercedes-Benz Oscars Viewing Party in February 2019.

2020 Onward: Stevens Continues To Spend Quality Time With His Family

Inevitably, everyone’s lives changed over the last few years due to the lockdowns, which likely explains why the two haven’t been spotted at any red carpet events recently. But that doesn’t mean they haven’t been busy. In addition to I’m Your Man, which Stevens revealed made the shortlist for the Academy Awards, he also voiced Prince Charles and Prince Philip in HBO Max’s adult animated sitcom The Prince. He is also starring in the American political thriller Gaslit, which offers a modern take on the Watergate scandal.

Most importantly, Stevens, Hariet, and their family have been spending a lot of quality time together. Although Hariet keeps her personal Instagram private, the Blithe Spirit actor shared a photo in June of this year holding his kids’ hands in his palm for Father’s Day, a tradition they’ve shared on social media for the past several years.

In February, Stevens gushed over his family in an interview with Gio Journal. “My wife and kids inspire me to keep exploring, to stay playful, to go out and bring home stories, experiences and to remember what’s important,” he said.

This article was originally published on March 13, 2017