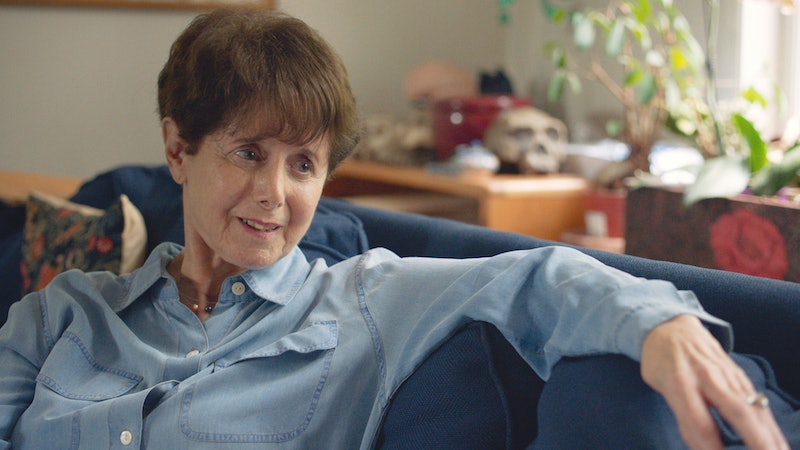 "I think any one of us, myself included, could kill," says Dr. Dorothy Otnow Lewis in the trailer for the new HBO documentary Crazy, Not Insane. Directed by Alex Gibney (Agents of Chaos), the film (out now) follows the life's work of Dr. Lewis, a psychiatrist, and author who devoted her career to studying murderers and why they kill. Are killers born or are they made? Are we all capable of murder? "Don't you ever wonder why you don't murder?" she asks in the trailer. These are all questions that she, Gibney, and the film try to answer for true-crime obsessives looking for more.

As a clinical psychiatrist, Dr. Lewis has interviewed over 100 murderers, death row inmates, and serial killers, according to the doc. Crazy, Not Insane dives into some of these cases, many of them famous, to explore not only Dr. Lewis' groundbreaking work but also to try to upend the death penalty system in America. As Gibney says in the film's press notes, through his team's research and working with Dr. Lewis, "We discovered that the death penalty has no deterrent effect. Further, it appears to encourage homicidal behavior. The states with the death penalty have higher murder rates than those without."

Read on for more about Dr. Lewis below.

Dr. Dorothy Otnow Lewis is a graduate of the Ethical Culture Fieldston School, Radcliffe College, and Yale University School of Medicine. According to the doc, she began her career working with children and violent juvenile offenders. Early in her career, the film's press notes say, she started to explore the way that childhood trauma could lead to murderous impulses as an adult. Couple that trauma with neurological damage and the recipe for a serial killer could be complete.

"You get a combination of factors, environmental and intrinsic, that create a very violent person," Lewis tells The Guardian. "I don’t think anyone is born evil. Or else, maybe you'd say we all are born with a capacity for evil, and you handle it differently."

Dr. Lewis then became an expert in Dissociative Identity Disorder (DID), formerly known as multiple personality disorder, and chronicled how some killers would switch back and forth between their alternate personalities, also known as "alters," over the course of her examinations and interviews. These alters were "developed in childhood, often as a way to endure and sometimes avenge, the pain they suffered," HBO's press notes reads.

From her extensive career, she wrote the book Guilty by Reason of Insanity: A Psychiatrist Explores the Minds of Killers, which was released in 1998.

One of Dr. Lewis' most famous cases was that of Arthur Shawcross. Shawcross was arrested in 1991 for murdering 11 women, according to the New York Times. Dr. Lewis' taped interviews show Shawcross inhabiting a number of alters, including his own mother and a 13th-century cannibal, per the doc.

Dr. Lewis also interviewed and assessed the famous serial killer Ted Bundy shortly before his execution. Bundy, the doc's press notes say, "was unusually candid with the psychiatrist, revealing new details that upend the conventional wisdom about him. One of Lewis' regrets is that she was never able to examine Bundy’s brain for clues to what made one of the world’s most infamous serial killers."

How She Became the Subject of Crazy, Not Insane

Gibney met Dr. Lewis while writing a fictional character with similarities to her life and work, The Los Angeles Daily News writes. Once meeting her, however, Gibney's focus shifted and he became fascinated with Dr. Lewis' career.

"Over time thought that this would make a pretty good documentary," Gibney tells the LADN. "Dorothy had these videotapes of her examinations of various murderers or people who had attempted murder, and those were fascinating."

Of his subject, Gibney says to the LADN, "Her curiosity is really extraordinary. And it’s so all-consuming for her that she can become a bit absent-minded at times, a bit disorganized. She can’t resist overwhelming herself with material. She’s like a detective of the human mind." He also adds that, "Dorothy has a great and wicked sense of humor, too."

The Role The Death Penalty Plays In The Doc

The doc is also Gibney and Lewis' takedown of the current American death penalty system. The title Crazy, Not Insane refers to "the conflict that the legal system – framed by demands for justice that can devolve into a desire for revenge – has with the world of medical science in defining grave mental illness," HBO writes in the press notes. "For many years Dorothy testified in death penalty cases about whether convicted murderers were sane enough to be executed. Her insights and forensic skills helped change the laws and the way that death penalty lawyers approach their clients' cases."

"It's playing along with a system that is outdated,' Dr. Lewis tells the LADN. "We should be telling the law what is crazy and what isn't crazy, and crazy and insane should pretty much have the same definition But they don't."

"Why would we engage in the death penalty unless it’s a kind of mechanism for revenge, for venting our anger and for reassuring ourselves that we’re the good people, those murderers are the bad people,” Gibney adds to the LA Daily News. "Which I think leads to a bigger question about the legal system in general: Are we in the business of judging character? Or are we in the business of judging action?”