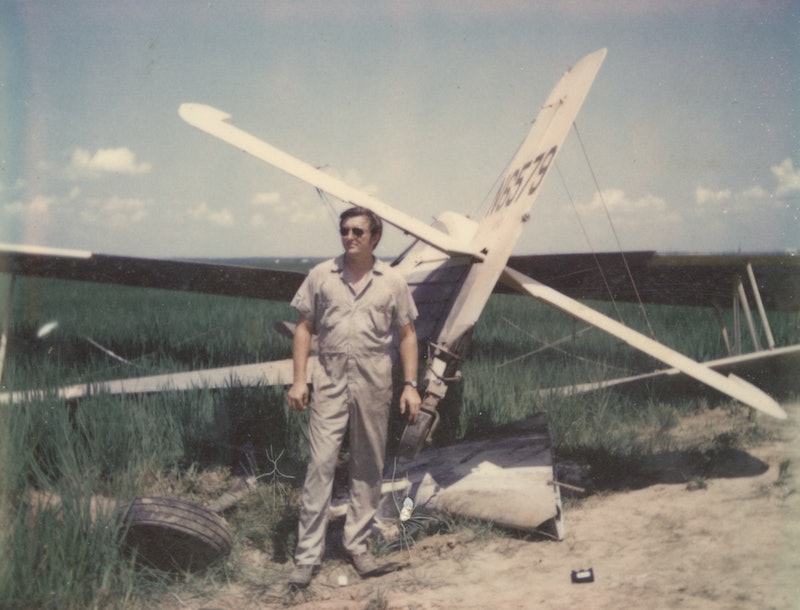 Spoilers ahead for HBO’s The Invisible Pilot. On Sept. 19, 1977, small town pilot Gary Betzner jumped off a bridge in Hazen, Arkansas and died in the White River, leaving behind his wife Sally and three children. Betzner had been bored of Hazen and his work as a crop duster, but he was known as having a happy home life. Nobody could understand why he would jump off the bridge, nor why law enforcement were unable to find his body.

That’s the mystery at the center of HBO’s three-part documentary series The Invisible Pilot, which features the one person that can explain what happened: Gary Betzner himself. Not only is he the show’s primary subject, he’s also the narrator, and he reveals in Episode 1 what led to him faking his own suicide. “In some cases it’s OK to tell a lie ... the truth is I didn’t jump. I didn’t even think of jumping,” he explains.

Betzner was born in Akron, Ohio and served in the Navy for five years after high school. He got his aviation license in 1964, and became a skilled pilot in Arkansas. He met Sally on July 20, 1969 during a moon landing party, and they had two kids together, Travis and Sara Lee. (Betzner also had another daughter, Polly, from a prior marriage.) He and Sally later opened Betzner Flying Service, and Betzner worked as a crop dusting pilot for 15 years. He enjoyed it at first because it was one of the few aviation jobs where you could still do daredevil moves, like flying under bridges or going upside down. But he grew tired of the difficult working conditions. In 1976, he sold the company and moved his family to Alaska to pursue rumors that people were getting rich from the oil pipelines. He bid $500K to buy in, but according to him, “didn’t pay the right people.” The contract went to another company.

Betzner still had his airplanes, so he moved his family to Anchorage and started smoking pot (which was briefly legal before President Ronald Reagan began cracking down on drugs). He started smuggling whiskey, then pot. But that didn’t generate enough income, so he and his family moved back to Hazen to live in Sally’s mom’s house.

There, Betzner was diagnosed with gout, and he claimed that cocaine was instrumental in curing it. But when he went to Miami to buy some on May 4, 1977, the dealer’s house was raided by DEA agents. They seized seven pounds of cocaine, and nine people were indicted (including two Miami Dolphin players). Facing over 20 years in prison, Betzner got out on bail and formulated a plan with Sally to go on the run. He decided to fake his suicide, complete with a note, and escape on a motorcycle waiting for him. He would keep in touch with Sally by talking in a phone booth at a specific time every month.

To make the ruse work, the couple took a hypnosis class for weeks, during which Betzner would put Sally under and tell the story about his death. They would practice throwing his clothes over the bridge, and once his shoes hit the water, the programming would begin and Sally would become hysterical. Somehow, this plan worked and Betzner went on the lam.

He later began working as a smuggler for George Morales, a Miami speedboat racer with deep ties to Pablo Escobar’s cartel in Colombia. Betzner went on to fly cocaine and guns directly for the cartel, and personally knew Escobar. The Washington Post estimated he made $2 million one year doing this business, but this also put him on the CIA’s radar. On April 7, 1988, Betzner testified at John Kerry’s subcommittee investigation about how the CIA leveraged him for their secret mission to arm anti-communist, Contra rebels in Nicaragua, per The Associated Press. Betzner explained that Morales “had made a deal with the CIA to supply [the Contras]. He wanted me to fly guns and ammunition to the Contras and bring some contraband back.″

Betzner believed that doing the guns-for-drugs trade would keep him out of jail, but he was arrested on Nov. 13, 1984. He was ultimately sentenced to 27 years and two months in federal prison for the importation of cocaine. He served his full sentence, reconnected with his kids, and now lives with his third wife.

More like this
A New Netflix Doc Will Explore The Unsolved Murder Of Jill Dando
By Sam Ramsden
This First Look At 'The Gold' Shows Jack Lowden In A Whole New Light
By El Hunt and Sam Ramsden
Michael B. Jordan Tackled His "Public Breakup" With Lori Harvey On 'SNL'
By Brad Witter
Andy Cohen Apologized To Larsa Pippen After A 'RHOM' Season 5 Reunion Dust-Up
By Brad Witter
Get Even More From Bustle — Sign Up For The Newsletter
From hair trends to relationship advice, our daily newsletter has everything you need to sound like a person who’s on TikTok, even if you aren’t.