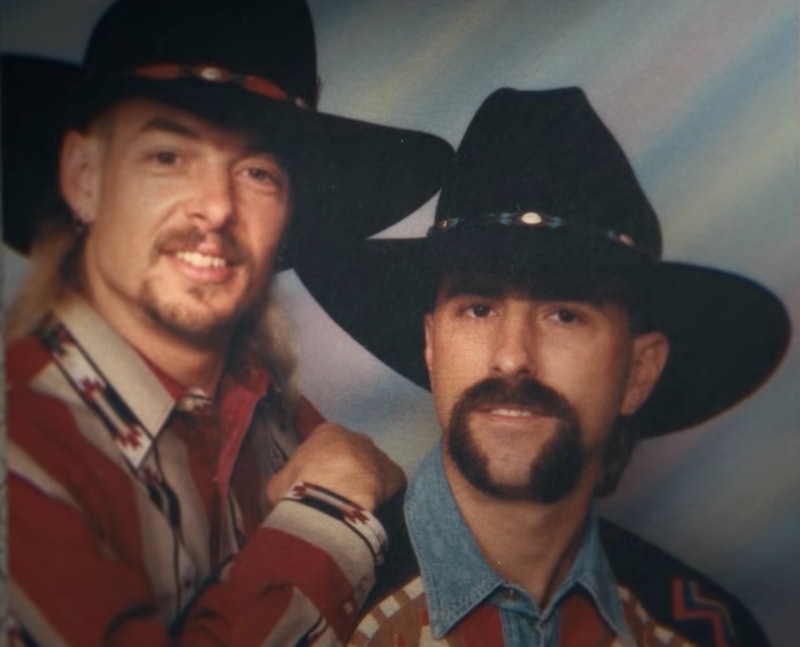 Season 2 of Tiger King was released to Netflix on Nov. 17, so get ready to marathon-watch another five episodes of the true-crime docuseries like it’s the early days of quarantine again. The follow-up season largely centers on the controversial Joe Exotic as he serves his 22-year prison sentence, featuring interviews with the former zookeeper conducted in jail about his life, work, and many romances. While fans of Tiger King know all about his penchant for having multiple partners, the series hasn’t delved into one formative relationship in his life — until now. Here’s everything to know about Exotic’s first husband, Brian Rhyne.

Speaking about his earliest relationships in the series, Exotic detailed his first engagement to Kimberly Craft, the daughter of a local fire chief. After building their relationship and committing to marriage as teenagers, the pair broke up when Exotic came out as gay at 19. Then, he told the story of meeting Rhyne. “I met Brian when I was working security at [gay bar] The Round-Up, and he was a customer,” he detailed. “We dated for a while and got married, and were together 16 years.”

According to a 2019 interview with Intelligencer, Rhyne was a “slender, sassy 19-year-old” when they first met in the ’80s, and they quickly moved into a trailer together in Arlington, Texas. There, “they shared their bed with a pack of poodles and grew to resemble each other, with mullets and horseshoe mustaches and dressed in jeans and boots,” per the publication. Their go-to couple activities reportedly included snorting “pink-tinged meth” before going out drinking and watching Western movies together at home. The pair eventually got married at The Round-Up, which wasn’t yet permitted by law, “but they didn’t give a f*ck.”

Following the October 1997 death of his brother Garold Schreibvogel in a tragic car crash, Exotic used his portion of a financial settlement to pursue his dream of opening a zoo. He bought and refurbished an old horse ranch in Wynnewood, Oklahoma, and named it the Garold Wayne Exotic Animal Memorial Park — though it’s commonly referred to as the G.W. Zoo. He and Rhyne moved into a house on the property and raised the zoo animals together, per Intelligencer.

In Season 2 of Tiger King, Craft said she remained close with Exotic following their breakup, as he continued to confide in her regarding his sexuality. She explained that Rhyne became a part of their family during his nearly two decades with Exotic. “Brian and I got along great; he was so good with the kids. We all spent time together,” said Craft. Exotic’s niece, Chaelsi Rutman, described Rhyne as “the glue of the family” and spoke highly of him. “Brian was included in everything,” she said. “I called Brian ‘Uncle Brian’ before I did Joe.”

However, Rhyne was HIV-positive, and he began experiencing major complications from the disease in 2001. As mentioned in the series, Rhyne’s worsening condition signaled his impending death. Determined to keep him comfortable for as long as he could, Exotic planned to move Rhyne back to their original home to give him a peaceful death. But after a trip to the hospital, Rhyne died in Exotic’s arms in the parking lot on their way home. As reported by Intelligencer, Exotic “screamed loud enough to make your ears ring.” As chronicled in the series, Rhyne’s death is suspected to be the turning point in Exotic’s life that morphed him into the eccentric character Tiger King fans know today.

Since his passing, Exotic’s been married to four other men. He wed J.C. Hartpence in 2002 after working on Exotic’s traveling animal show together, but they divorced after a year — and several reported death threats. Then, he began a relationship with zoo employee John Finlay the following year, and the pair stayed together until fellow zoo worker Travis Maldonado was hired a decade later. The trio underwent an unofficial three-way marriage in 2013, but Exotic and Finlay soon fell out. In 2015, Exotic legally married Maldonado, and their relationship lasted until Maldonado’s tragic accidental October 2017 suicide. Exotic married another zoo worker named Dillon Passage two months later; the pair remained together until March 2021, though Passage has since accused him of emotional abuse. In July, Exotic announced a contest called “The Bachelor King,” which invites men over the age of 18 to submit applications in hopes of becoming his next husband.

If you or someone you know is seeking help for substance use, call the SAMHSA National Helpline at 1-800-662-HELP(4357). For help with domestic abuse, call 911 or the National Domestic Violence Hotline at 1(800) 799-SAFE (7233) or visit thehotline.org. If you or someone you know is considering self-harm or experiencing suicidal thoughts, call the National Suicide Prevention Hotline at 1-800-273-8255 or text HOME to the Crisis Text Line at 741741.

More like this
'Bling Empire: New York’ Star Tina Leung Has A Superhero Alter-Ego
By Alyssa Lapid
Who Is Dorothy Wang Dating After The 'Bling Empire: New York'?
By Karen Fratti
Andy Cohen Apologized To Larsa Pippen After A 'RHOM' Season 5 Reunion Dust-Up
By Brad Witter
Brittany Snow Files For Divorce From Tyler Stanaland After 'Selling The OC' Drama
By Grace Wehniainen and Radhika Menon
Get Even More From Bustle — Sign Up For The Newsletter
From hair trends to relationship advice, our daily newsletter has everything you need to sound like a person who’s on TikTok, even if you aren’t.