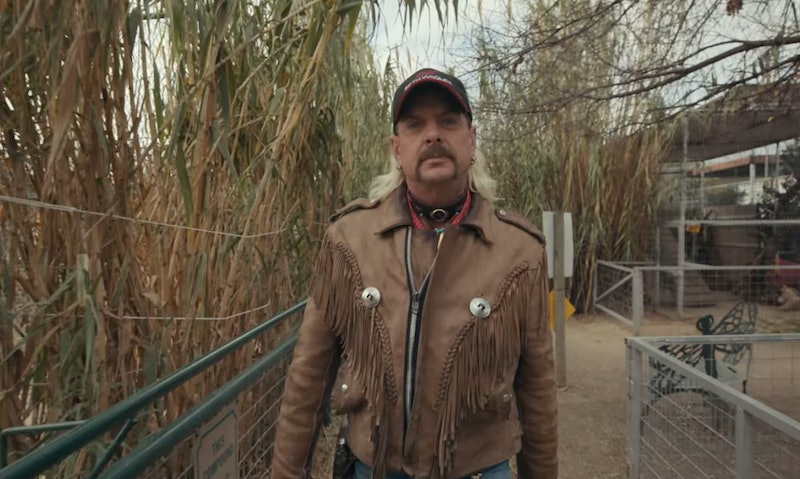 In March 2020, Netflix’s Tiger King introduced the world to Joe Exotic (real name Joseph Maldonado-Passage), the gun-toting, sequin shirt-loving former owner of Oklahoma’s G.W. Zoo. Throughout its first season, the show documented numerous allegations against the big cat breeder, including that he endangered wildlife and hired two people with the intent to murder animal sanctuary owner Carole Baskin, who he had long publicly hated for her accusations of animal abuse against him.

By the time Tiger King aired, Exotic — who has maintained his innocence — had already been arrested for the murder-for-hire plot and 17 other crimes, including allegedly killing five tigers, selling tiger cubs in interstate commerce, and falsifying forms. On the day of his sentencing in January 2020, he pleaded to the judge for freedom, claiming he had two "incurable" diseases and needed to return home to care for his ill father. "I know that I've done wrong," Exotic said, according to The Oklahoman. "I know that. I will never be here again." He also repeatedly blamed Jeff Lowe — who took over the G.W. Zoo in 2016 — for setting him up, as well as the government witnesses for lying about what he said. Ultimately, Exotic was sentenced to 22 years in prison.

“Wildlife crime is often connected with other criminal activity such as fraud, narcotics, money-laundering and smuggling. Mr. Maldonado-Passage added murder-for-hire,” Edward Grace, assistant director of the U.S. Fish and Wildlife Service’s Office of Law Enforcement, said in a statement at the time, according to The Washington Post. “The Service along with our partners will continue to bring to justice [to] those involved in wildlife trafficking and other assorted crimes.”

Exotic was initially being held at FMC Fort Worth in Fort Worth, Texas, but has since been moved to a medical facility for federal inmates in Butner, North Carolina after he was diagnosed with cancer. His release date is set for September 2037, but he has attempted to appeal that sentence several times. In April 2020, a judge dismissed his first appeal, deeming it “frivolous” and poorly written. In September 2020, Exotic filed for a presidential pardon, maintaining his innocence and claiming he was “railroaded and betrayed” by others. “Joseph is scheduled to be released from (Bureau of Prisons) custody in 2037; however, with his ‘comprised’ health, he will likely die in prison,” his attorneys wrote in a 257-page application, per the Associated Press. “He humbly requests a pardon to correct the injustices he has experienced and to have the opportunity to return to providing meaningful contributions to his community.”

When former President Trump pardoned over 100 people during the final hours of his presidency in January 2021, Exotic was so confident he’d be on the list that his team had a limo and a hair and wardrobe team ready. However, he didn’t make the cut. Exotic has now switched to asking President Biden for a pardon, pleading in a recording to the president that “this is the time that you need to be a world hero,” per The New York Times.

On July 14, 2021, a three-judge panel for the U.S. court of appeals for the 10th Circuit in Denver upheld Exotic’s conviction, but found that the court had wrongly calculated his prison term. They said that the two separate murder-for-hire plots should have been treated as one conviction, since they both had the same goal of killing Baskin. On Jan. 28, 2022, Exotic was resentenced to 21 years in prison, reducing his original punishment by just a year.

Today, Exotic continues to serve out his time at the North Carolina facility. It appears someone on his team has been helping him to update his Instagram and ask for money from fans to help with his cancer treatment, promote his various merch lines, and rant about Dillon Passage’s new boyfriend. Meanwhile, his team continues to file motions for a new trial. Exotic got COVID in February, and on Feb. 22, he posted a long letter claiming he’s fallen in love with a fellow inmate named John Graham and has changed his last name.

More like this
Where Is Charlie Evens Now?
By Morgan Leigh Davies
Anthony Templet Wants To “Live Normally” After Killing His Father
By Brad Witter
'Indian Matchmaking’s Vinesh Is Still Single After Season 2
By Kadin Burnett
Akshay Is Still Single After Reversing His Marriage Curse In 'Indian Matchmaking' Season 2
By Kadin Burnett
Get Even More From Bustle — Sign Up For The Newsletter