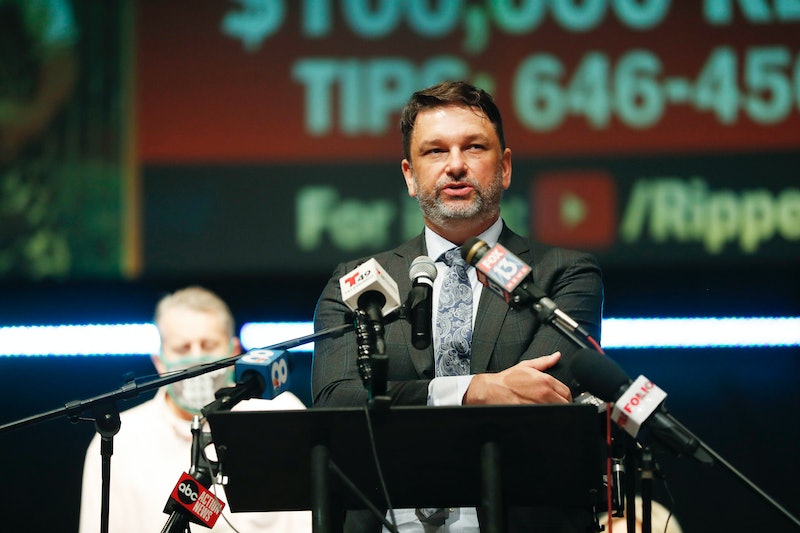 Upon Tiger King first hitting Netflix in March 2020, audiences became obsessed with Joe Exotic, an eccentric and controversial former zookeeper. Season 1 followed his decades-long career as the founder of G.W. Zoo, which he officially left in 2018 — just a few months before he was arrested on suspicion of hiring hitmen to murder Big Cat Rescue founder Carole Baskin. The following year, he was convicted on 17 federal charges of animal abuse and two counts of attempted murder for hire due to his plan to kill Baskin. Exotic has been serving his 22-year prison sentence since before the Netflix series debuted, and he’s since hired defense lawyer John M. Phillips, who’s prominently mentioned in the newly-released Tiger King 2.

“We are honored to announce that Joe has retained our firm,” Phillips said in a clip posted to Twitter in March, shortly after he joined Exotic’s case. “We are going to seek a new trial, and justice is the civil and criminal courts because we are committed to justice and committed to Joe.”

When Exotic first hired Phillips, several news outlets quickly pointed out that Phillips also recently represented the family of Tiger King star Don Lewis — aka Baskin’s late husband. Lewis went missing in 1997 from his Tampa, Florida, home, leaving Baskin and his daughters to fight over his $5 million-plus estate in court. Baskin won, earning most of the money. In July 2020, Phillips was hired by Lewis’ daughters and former assistant, Anne McQueen, to file a lawsuit against Baskin, Kenny Farr, and a woman listed as a witness on Lewis’ will, per the Tampa Bay Times. The filing demands the defendants hand over any information they have about Lewis’ death to be utilized in future lawsuits.

On the website for his law firm, Phillips & Hunt, the lawyer detailed his belief in Exotic being granted a re-trial — with no mention of his past work for Lewis. “Justice is supposed to be blind, fair and level. Yet, we already have evidence that Joe's trial was none of those things,” wrote Phillips, per Pop Culture. “Our goal is to set the record straight and get a new trial for Mr. Maldonado-Passage [Exotic’s government name]. We are working through these issues now. This is serious and probably has been treated with less seriousness and sanctity than justice deserves.”

Once Tiger King 2 hit Netflix on Nov. 17, Phillips posted a tweet commenting on the series and acknowledging his ties to both Exotic and Lewis. “Let me know what you thought about Tiger King 2. It was/is a strange and emotional ride,” he wrote. “Let me make one thing clear, I care about Don Lewis’s family. They deserve answers and justice. I also care deeply about @joe_exotic. His legal needs are urgent as he was wrongly imprisoned.”

Aside from his work for the Tiger King stars, Phillips has participated in several high-profile court cases. He represented Ron Davis and Lucy McBath following the tragic 2012 shooting of their son, Jordan Davis, by Michael Dunn and won the case, garnering praise as a civil rights advocate from outlets including BET. In 2018, Phillips’ firm began representing Omarosa Manigault Newman in both arbitration and litigation against Donald Trump, whom she worked for before and during his presidency. In September, Phillips won her arbitration case.

More like this
'Bling Empire: New York’ Star Tina Leung Has A Superhero Alter-Ego
By Alyssa Lapid
Netflix Shut Down 'Bridgerton' S3 Rumours About A “Very Dark” Storyline
By Bustle
Everything To Know About 'Selling The OC' Season 2
By Brad Witter
'RHOSLC' Star Jen Shah Refuses To Do A Post-Sentencing Interview With Andy Cohen
By Brad Witter and Jake Viswanath
Get Even More From Bustle — Sign Up For The Newsletter
From hair trends to relationship advice, our daily newsletter has everything you need to sound like a person who’s on TikTok, even if you aren’t.