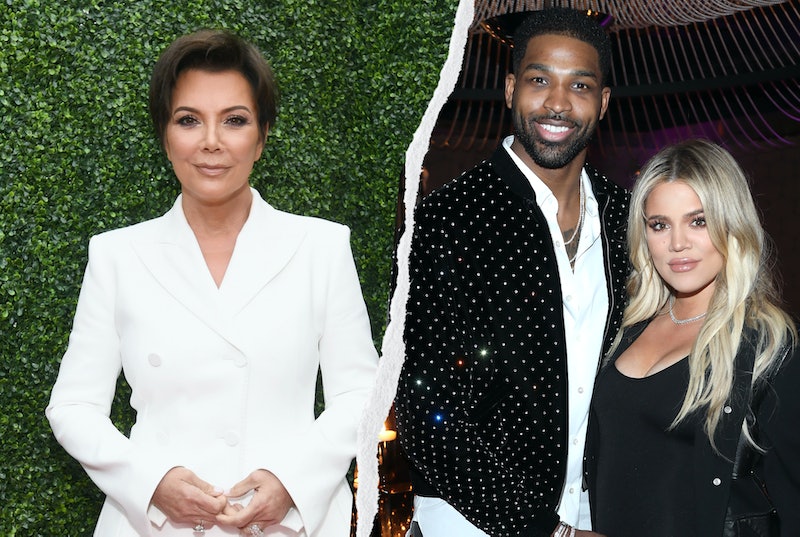 Tristan Thompson and Khloé Kardashian's on-again, off-again relationship is a tale as old as time in the reality TV world. Way back when, Tristan and Khloé fell in love, had the cutest daughter named True Thompson, and then Tristan blew it all up when it became clear he was cheating on Khloé while she was pregnant. She took him back and tried to make their relationship work, but Tristan betrayed her trust yet again when he hooked up with Kylie Jenner's then-best friend Jordyn Woods. Now, Tristan is making amends on Keeping Up With The Kardashians.

During the season finale, which was filmed at the start of the pandemic, Tristan opened up to Khloé's best friend Malika Haqq about his indiscretions before speaking to matriarch Kris Jenner. "Losing her made me lose a part of myself, and I was going down a path that was not who I wanted to be," he told Haqq. "And the toughest part is when I first met Khloé, I told Kris, 'I would love to take your daughter to Cleveland,' and I gave her my word that I was going to protect her daughter and I failed."

While Khloé acknowledged that they don't have to be in a romantic relationship just because they share a daughter together, she admitted that she would like a happy ending. Obviously, that would require Thompson to not revert back to his old ways. "You can understand the reservations I have, right?" The Good American co-founder asked the athlete. "Do I love you? A million percent. Am I in love with you currently? No, but would it be great if I could have this fairytale ending? Yes."

Since this was filmed, Khloé and Tristan decided to take another chance on their relationship, which was made clear in tabloid stories leading up to this season. During the finale, Khloé said they had only given each other a peck toward the beginning of quarantine, but it would come as no surprise if their relationship has evolved since then. Perhaps fans will get another inside look when the show returns for its final season in early 2021.