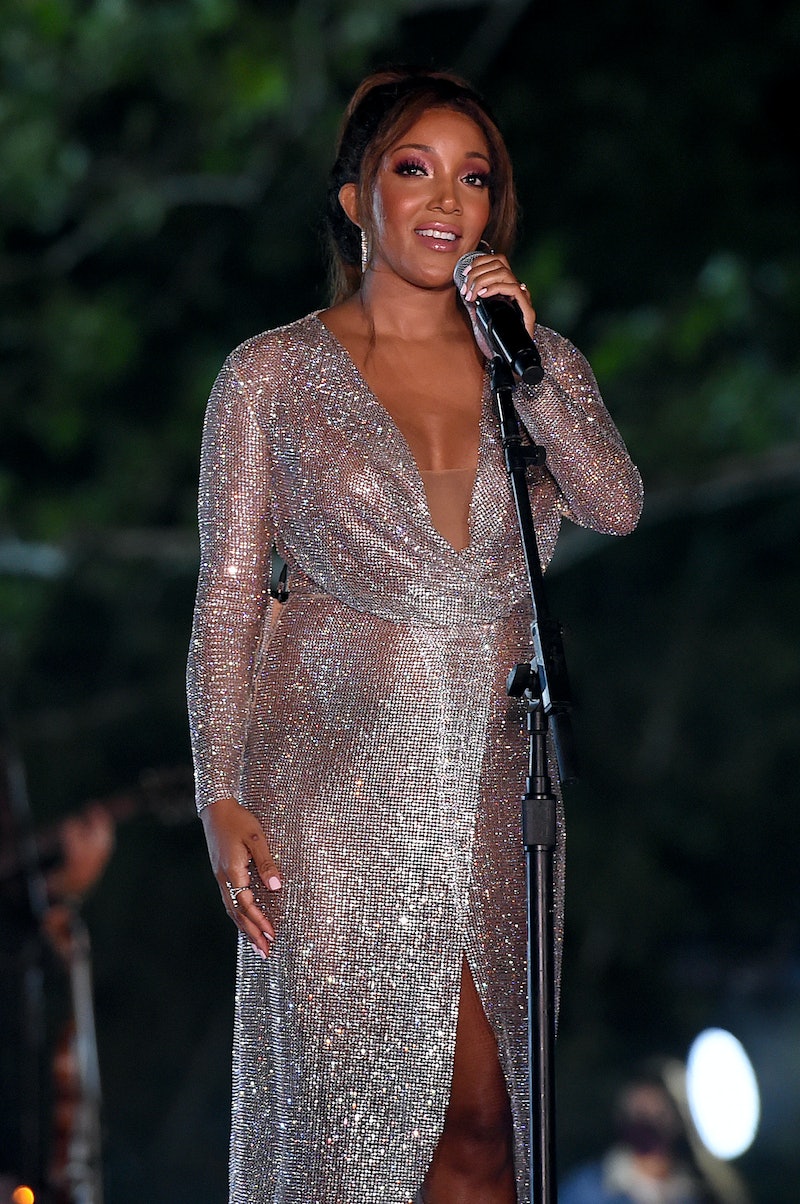 It’s been a jam-packed and exciting few months for Mickey Guyton. The singer made history in September 2020 as the first Black woman to sing at the ACM Awards, delivering an emotional performance of What Are You Gonna Tell Her? with Keith Urban on piano. In February 2021, she gave birth to a baby boy named Grayson. The following month, she earned herself an ACM nomination and hosting gig with Urban, which will take place in April. First, though, Guyton will perform at the Grammys on March 14, where she’s making history yet again as the first Black woman to be nominated for a country category.

Following the ACM news and just ahead of the Grammys, Guyton expressed feeling joyfully overwhelmed by her success and wrote, “What is my life right now?!” in one of her Instagram captions. It’s been a musical whirlwind, so here’s a refresher on Guyton’s music, memorable moments, and powerful work in speaking out against racism in country music and beyond.

The Texas native counts artists such as Dolly Parton, Cece Winans, Whitney Houston, and LeAnn Rimes as her inspiration. Once again proving that she’s an angel, the Jolene singer once surprised Guyton during a 2016 interview on CBS This Morning.

Guyton’s big break came only a year earlier, with the release of her debut single, Better Than You Left Me. After making her way onto the scene, she received her first ACM nomination for New Female Vocalist of the Year. Since then, popular singles like 2020’s What Are You Gonna Tell Her? and Black Like Me, up for Best Country Solo Performance at the Grammys, have given Guyton the platform to explore social issues through song and cement herself as a major country player.

During September 2020’s ACM Awards, Guyton made history as the first Black woman to perform on the show’s stage. In her corner at the time was fellow country star and her future ACM co-host, Keith Urban. Not only was the performance phenomenal, but it also marked a full-circle moment for Guyton. A decade earlier, during a performance at the White House for PBS, she said Keith Urban was her first concert ever.

Guyton’s Grammy-nominated song, “Black Like Me,” details experiences with racism. Though she had already written the track, she never had plans to release it. But amid the Black Lives Matter protests and following the murder of George Floyd last May, she decided to share her song via an impromptu Instagram post. She detailed the unorthodox release in an interview with NPR:

“I just put it out there because people need to hear that. And then Spotify called and asked for it. I was like, ‘Here. Take it. No, there doesn't need to be promotion because that's tacky.’ This is not about me. This is about the bigger spectrum of things and about humanity. And that's why we did it. It was purely to try to at least get people to hear different perspectives.”

In addition to exploring the impact of systemic racism via song, Guyton has also been vocal about it online. Following Morgan Wallen’s use of a racial slur captured on camera, Guyton took to Twitter to call him out. “The hate runs deep,” she said. “How many passes will you continue to give?”

More recently, Guyton watched the tell-all interview with Meghan Markle, Prince Harry, and Oprah Winfrey and spoke out against the racism their growing family faced. “Omfg they had conversations about how dark baby Archie was going to be? For f*ck sakes this is heartbreaking,” she wrote. “Her freaking child experienced racism before he was even born...”

Guyton’s Instagram is a trove of highlights from her life. In addition to sharing clips of her learning about life on the farm with Cardi B for the rapper’s Cardi Tries Facebook series, Guyton also keeps her 89,000 (and counting!) followers updated with her personal life. On Feb. 8, 2021, Guyton shared the exciting news that she had welcomed a baby boy. She wrote, “The hardest and most beautiful thing I have ever done. Welcome to the world Grayson!” Later, on Valentine’s Day, she expressed, “Never has my heart felt a love like this.”

What’s Next For Guyton?

After the Grammys, Guyton will have her sights set on the ACM Awards. She is up for the New Female Artist of the Year honor and will be hosting alongside Urban, making her the first Black woman to helm the show. The exciting gig was announced on March 11 via Instagram.