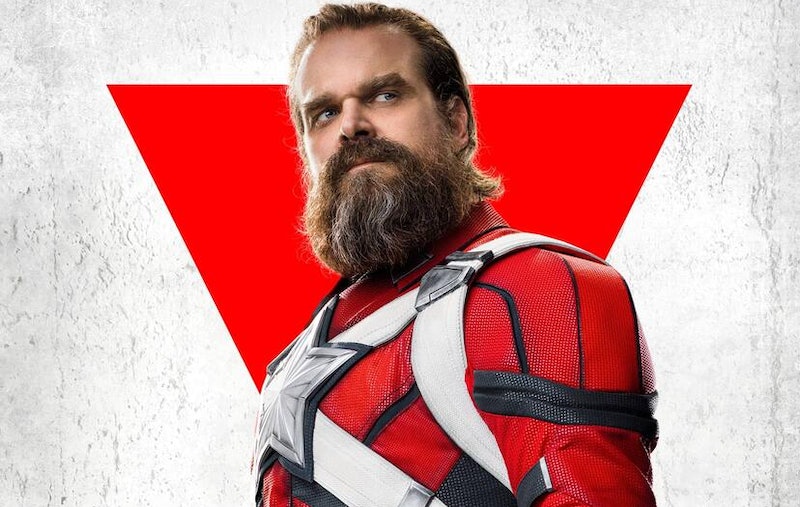 With two dozen films already released and another dozen or so in the works, the Marvel Cinematic Universe (MCU) is always in expansion mode — and always introducing new faces. In Black Widow, Stranger Things star David Harbour will add his name to the ever-growing list of MCU alumni with his turn as Red Guardian. The Black Widow character is an old ally of Natasha Romanoff’s, but what else do we know about this Soviet superman?

Rewinding a bit, we should first talk about the story Black Widow is telling. The film is a pseudo-prequel, as it takes place after Natasha went into hiding following the events of Captain America: Civil War, but before she returned to the Avengers in Avengers: Infinity War and met her heroic demise in Avengers: Endgame. It follows Natasha as she returns to Russia, the place where she grew up and was trained to become a deadly assassin. While there, she decides to try and take down the Black Widow program, to save young recruits from suffering. To do so, she enlists the people who once posed undercover as her fake family — and among them is Red Guardian.

Who Is Red Guardian In Black Widow?

The movie version of Red Guardian as portrayed by David Harbour is an over-the-hill superhero — or, rather, superpowered operative — whose real name is Alexei Shostakov. In his prime, he was the Soviet Union’s version of Captain America — though he obviously has very different allegiances and possesses a considerably different personality (think brutal but with a sense of humor). He also had a paternal relationship with Natasha and her surrogate “sister” and fellow Black Widow, Yelena Belova (Florence Pugh). That relationship comes into play when Natasha returns to his life.

What Are Red Guardian’s Powers?

As the Soviet Union’s version of Cap, Red Guardian apparently possesses a similar power set; Red Guardian is known to have super strength and super speed that are likely comparable to those possessed by Cap. In other words, we’re not talking Hulk or Thor levels of strength here, but the guy should certainly be able to handle himself in a fight. Even his red and white uniform, complete with mask/helmet, bears a striking resemblance to Cap’s standard Avenging outfit.

Who Is Red Guardian In The Comics?

As is usually the case in the MCU, the movie version of Red Guardian takes a few liberties, rather than hewing to closely to the comics version. In Marvel Comics, there have actually been no fewer than seven characters who have gone by the name Red Guardian, but the most significant among them is Alexei Shostakov. This character was introduced in the pages of 1967’s Avengers Vol. 1 #43, where he came into conflict with the Avengers, and was shown to be the Soviet equivalent of Captain America. Then, the character’s backstory was revealed, and here’s where the film diverges considerably.

Like Natasha Romanoff, Alexei underwent training in Russia’s notorious Red Room. This is before he was transformed into Red Guardian; at the time he was just a standout communist operative and national hero. He and Natasha fell in love and got married — no father figure here, thank you very much — and were a happy couple until he apparently perished in a rocket explosion. Natasha became so distraught that she (eventually) joined the Avengers, while Alexei — whose death was faked — underwent years of intense training that hardened his body and mind, turning him into the villainous and ruthless Red Guardian. When he fought the Avengers in his debut story, he had a change of heart upon seeing his former love Natasha and ended up saving the superhero team from his villainous comrades, resulting in his own heroic death. Of course, since this is a comic book, he was later revealed to still be alive and has made a handful of sporadic appearances over the years, but he is mainly remembered for his Cold War-fueled ’60s stint in the pages of Avengers.

It’s unknown if Red Guardian’s cinematic career will continue after Black Widow, but David Harbour certainly would like it to. In fact, the actor is hoping for a face-off between his communist crusader and Steve Rogers. “I do think the classic Cold War thing is a really fun and funny dynamic between these two guys and the fact that they came up like nuclear warheads like in an arms race together. I think it’s a great concept that could be explored further,” Harbour said at a recent press conference for the film, according to Deadline. “Is Kevin Feige in the room, did he hear?”

The ball’s in your court, Feige.

More like this
Kukulkan From 'Wakanda Forever' Has A Surprising Connection To Marvel History
By Grace Wehniainen
Anne Hathaway Shared A "Thrilling" 'Princess Diaries 3' Update
By Darshita Goyal
Twitter Is Overjoyed By Angela Bassett’s Record-Making Oscar Nomination
By Maxine Harrison
Rupert Grint Just Shared A *Major* Update About Ron Weasley’s Future
By El Hunt
Get Even More From Bustle — Sign Up For The Newsletter
From hair trends to relationship advice, our daily newsletter has everything you need to sound like a person who’s on TikTok, even if you aren’t.