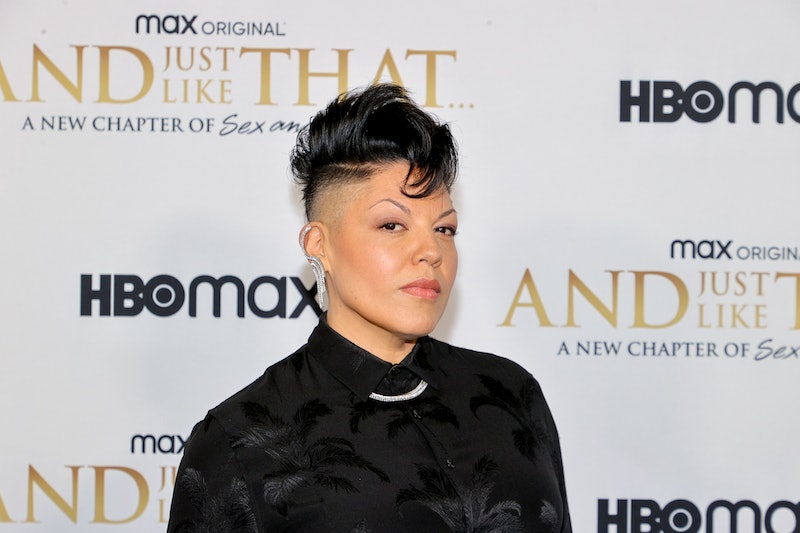 HBO Max’s And Just Like That... premiered in December and introduced longtime Sex and the City fans to a host of new characters, including Che Diaz. Diaz is a queer, non-binary comedian and podcast host played by Sara Ramirez — and it’s not their first queer role. Ramirez, whose pronouns are they/them, has long been celebrated for positively representing the LGBTQ+ community on screen. Prior to the SATC reboot, they played bisexual surgeon Callie Torres on Grey’s Anatomy and bisexual and non-binary political strategist Kat Sandoval on Madam Secretary. In real life, Ramirez identifies as bisexual and non-binary.

Ramirez, who appears to be single (or quietly dating) after a 10-year-long relationship with ex-husband Ryan DeBolt ended in 2021, has been very open about their personal life. According to Out magazine, four years after Ramirez married DeBolt on the beach in 2012, Ramirez came out as bisexual and queer at a summit for True Colors United, a nonprofit organization co-founded by Cyndi Lauper that works to end youth LGBTQ+ homelessness. Then, in August 2020, True Colors helped Ramirez come out as non-binary. “New profile pic,” Ramirez wrote on Instagram alongside a selfie. “In me is the capacity to be girlish boy, boyish girl, boyish boy, girlish girl. All. Neither.”

READ NEXT: Who Is The Richest ‘SATC’ Franchise Star?

In July 2021, Ramirez announced the split with DeBolt. “Ryan and I are no longer together,” they wrote. “We remain loving and supportive in how we are choosing to forge our new individual paths. Thank you for holding space around our choices and respecting our families’ privacy as we navigate this process on our own terms.”

The former couple never had any children together and were reportedly separated for many years before making their official split announcement in 2021. In November 2021, Ramirez described their split to Out as a “very tender and vulnerable process,” especially because of how much love existed between them. “We had a foundation of real love,” they said. “I am just so grateful that we were able to work through that process with such grace, with such integrity, with such honesty and open communication. We were rooting each other on every step of the way.”

With the hard part behind them, Ramirez and DeBolt are now able to crack jokes about their relationship. The actor told Out that they often say they “married the right man because there’s no one else I’d rather be getting divorced from ... We have the kind of foundation of love where we can joke like that. But it’s because we’re holding space for each other as friends.” Jokes aside, Ramirez added that they needed time to process their split in private. “I’m really, really proud of the way that we have moved through things,” they said.

While it remains unclear whether Ramirez has started dating again, what is clear is that their bustling career is taking center stage. In December, after And Just Like That... premiered, Ramirez gushed over getting to be a part of the reboot in an interview with Vogue. “I had watched the original Sex and the City 20 years ago and had dreamed of guest-starring on the show, and then the series ended,” they said. “So I thought my dream would not come true anymore.”

Ramirez added that And Just Like That... has been a particularly great experience because everyone has been so respectful — including Sarah Jessica Parker, who asked them their pronouns at the first table read. “I said ‘They/them,’ and she said ‘OK, great. I really want to get this right,’” Ramirez recalled. “Those are the kinds of experiences that I had from the beginning that signaled to me that I would be working with people who are really interested in progress, in learning, and in making space for our messy, beautiful humanity. Those are the kinds of people I want to surround myself with, so I feel really lucky.”

More like this
Meghan Trainor & Daryl Sabara Are Expecting Their Second Baby
By Jake Viswanath
Who Is Allison Williams Dating After Her Divorce? She’s Engaged With A Child
By Jake Viswanath
Selena Gomez Confirms She's Single Amid Drew Taggart Dating Rumors
By Martha Sorren, Jake Viswanath and Jack Irvin
Laura Anderson Pulled The Ultimate Girl Power After Her Break-Up
By El Hunt and Megan C. Hills
Get Even More From Bustle — Sign Up For The Newsletter
From hair trends to relationship advice, our daily newsletter has everything you need to sound like a person who’s on TikTok, even if you aren’t.