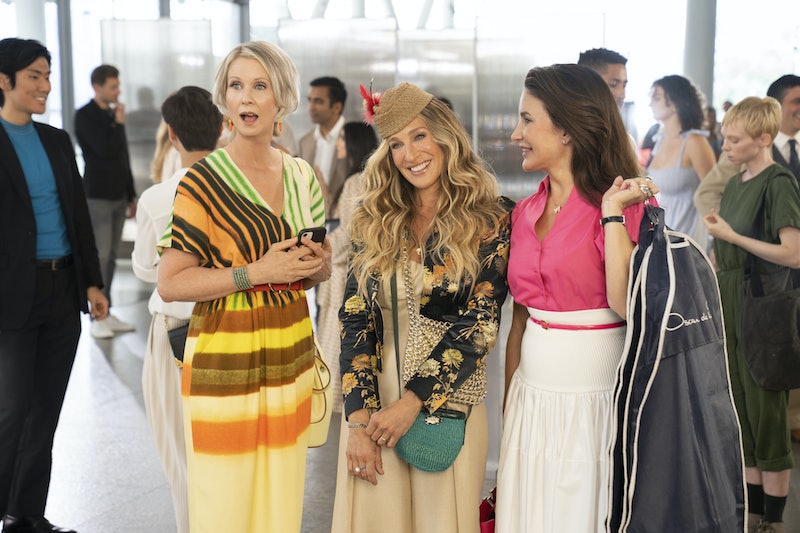 After years of whispers and rumors regarding a Sex and the City reboot, the series finally arrived on HBO Max in December 2021. And Just Like That... might not be quite as groundbreaking as the original series, but SATC fans are still excited to see some of their favorite characters back together (even though many people miss seeing Samantha Jones, who isn’t in the revival).

The new series stars just three members of the original quartet, as Kim Cattrall made it very clear she wants nothing to do with the SATC franchise any longer despite the hefty paycheck she would have received had she returned. According to Variety, Sarah Jessica Parker, Kristin Davis, and Cynthia Nixon are all earning $1 million for each half-hour episode.

Those checks will ensure the three stars live comfortably from now on — not that they were hurting before. In fact, all three of them have sizable bank accounts thanks to their ongoing SATC fame and other acting work. But who is the richest? And how about the supporting characters who are also back for more fun in And Just Like That...?

Here’s a look at the net worths of the most popular people in the reboot.

What Is Sarah Jessica Parker’s Net Worth?

Of the four women who made Sex and the City the critical and commercial juggernaut it was, Sarah Jessica Parker is the one the public most often associates with the series, and she has earned the most money from it as well. While the bulk of her fortune is connected to SATC, she has also made many shrewd investments in real estate, and she’s scored millions from the fashion world.

Throughout the six seasons Sex and the City ran on HBO, Parker amassed one of the largest fortunes in TV history, and her per-episode fee was at one point the largest ever. According to Yahoo, Parker raked in $50 million for the first three seasons, and after that, she became a producer as well, which helped her command a much larger sum. The second half of the show’s run brought her close to $150 million, meaning she collected upward of $200 million from SATC. Once Sex and the City became a film franchise, Parker collected another $35 million for the two movies.

Parker has also signed many endorsement deals with brands like Gap and Garnier, designed a number of clothing lines, and left her mark on the fragrance world. All those endeavors paid her tens of millions of dollars, adding to her ever-growing net worth.

What Is Kim Cattrall’s Net Worth?

If Kim Cattrall was involved in And Just Like That…, she’d rank as the second-richest star in the cast. The former Samantha Jones has been acting for decades, and she broke in a major way in the ’80s with films like Mannequin, Police Academy, and Porky’s. She enjoyed a big career boom when she signed on to play the sex-crazed star of Sex and the City, but as time went on, her relationship with her three fellow leading ladies fell apart.

Cattrall did appear in both SATC films, but when it was time to start creating the reboot, she refused to return to the character, instead signing on to other projects such as Peacock’s Queer As Folk remake and the How I Met Your Mother spinoff, How I Met Your Father.

What Is Kristin Davis’ Net Worth?

Among the women of Sex and the City, Kristin Davis was one the lowest-paid, but she still managed to do extremely well for herself throughout her years on TV and on the big screen. The star reportedly brought in as much as $350,000 per episode halfway through the show’s run. For the Sex and the City movies, Davis collected $2 million for the first and $4 million for the second.

What Is Cynthia Nixon’s Net Worth?

Either Cynthia Nixon’s net worth is very difficult to pin down, or she’s lost a lot of money in the past few years. Around the time she decided to run for governor of New York, the star’s net worth was placed at around $60 million by Newsweek, with the bulk of that coming from her roles in Sex and the City and the two movies that followed the series.

Just three years after she unsuccessfully attempted to get into politics, she is now reportedly worth $25 million, according to Celebrity Net Worth. With $10 million coming her way following the shooting of And Just Like That…, that total will surely rise once updated figures become available.

What Is Chris Noth’s Net Worth?

Chris Noth’s return to the SATC franchise and his character Mr. Big’s shocking storyline in the And Just Like That… premiere has recently been overshadowed by The Hollywood Reporter’s published accusations from two women claiming that the actor had sexually assaulted them years ago. Shortly afterward, a third woman came forward to reveal that Noth had allegedly assaulted her.

Parker, Nixon, and Davis responded to the accusations: “We are deeply saddened to hear the allegations against Chris Noth. We support the women who have come forward and shared their painful experiences. We know it must be a very difficult thing to do and we commend them for it.”

Many of these alleged events took place during the height of Noth’s career, when he was a star on Sex and the City as Carrie Bradshaw’s tumultuous love interest Mr. Big.

What Is Evan Handler’s Net Worth?

It’s not always easy to make a divorce lawyer character lovable, but the writers of Sex and the City made it work with Harry Goldenblatt. Played by the actor Evan Handler, the man who brought Davis’ love interest to life has enjoyed a long and storied career outside of just the one show. Throughout his years in Hollywood, Handler has made quite a bit of money, and his net worth stands at $8 million, according to Celebrity Net Worth, thanks to his performances in Friends, Six Feet Under, Californication, Lost, 24 and more recently, Power.

What Is David Eigenberg’s Net Worth?

For nearly 30 years now, David Eigenberg has appeared in dozens of TV shows, largely preferring to stick to the small screen. He’s been seen in procedurals like Homicide: Life on the Street, The Practice, Judging Amy, CSI: Crime Scene Investigation, ER, and NCIS. Eigenberg is perhaps best known for portraying Steve Brady, Miranda Hobbes’ romantic love interest and (spoiler!) eventual husband. His tireless work on TV has earned him a net worth of $6 million.

What Is Willie Garson’s Net Worth?

And Just Like That… is sadly Willie Garson’s final screen credit, as the beloved actor passed away from pancreatic cancer in September 2021, just a short time before the reboot premiered. In the SATC universe, the actor played Stanford Blatch, one of Carrie Bradshaw’s best friends. His character is sometimes referred to as the “Fifth Lady,” as his role required him to be flamboyant.

What Is Sara Ramirez’s Net Worth?

Sara Ramirez is not just a talented actor and singer, they are also a groundbreaking activist, both through their work onscreen and offscreen. After winning a Tony Award for their performance in Spamalot, Ramirez jumped into TV on one of the most popular shows on the air, Grey’s Anatomy. On the medical series, they played Dr. Callie Torres, and Ramirez ended up staying on the program for an incredible 11 seasons. That lengthy tenure has helped the nonbinary star pad their bank account, with a net worth of at least $5 million.

What Is Mario Cantone’s Net Worth?

Mario Cantone has regularly played the funny gay character. For decades, Cantone has never been a leading man, but he has worked steadily, appearing in TV shows like Chappelle’s Show, NYPD Blue, and AJ and the Queen. His most high-profile gigs have both been Sex and the City-related, and playing Anthony Marentino has helped him accrue a net worth of $3 million, according to Celebrity Net Worth.

More like this
What Is Pamela Anderson’s Net Worth? She Was Never Paid For Her Stolen Sex Tape
By Hugh McIntyre
Michael B. Jordan Tackled His "Public Breakup" With Lori Harvey On 'SNL'
By Brad Witter
'GoT' Star Emilia Clarke Says She "Just Can't" Watch 'House Of The Dragon'
By Brad Witter
The Black Lotus Staff Has "Had Enough" In The 'White Lotus' Spoof From 'SNL'
By Brad Witter
Get Even More From Bustle — Sign Up For The Newsletter
From hair trends to relationship advice, our daily newsletter has everything you need to sound like a person who’s on TikTok, even if you aren’t.