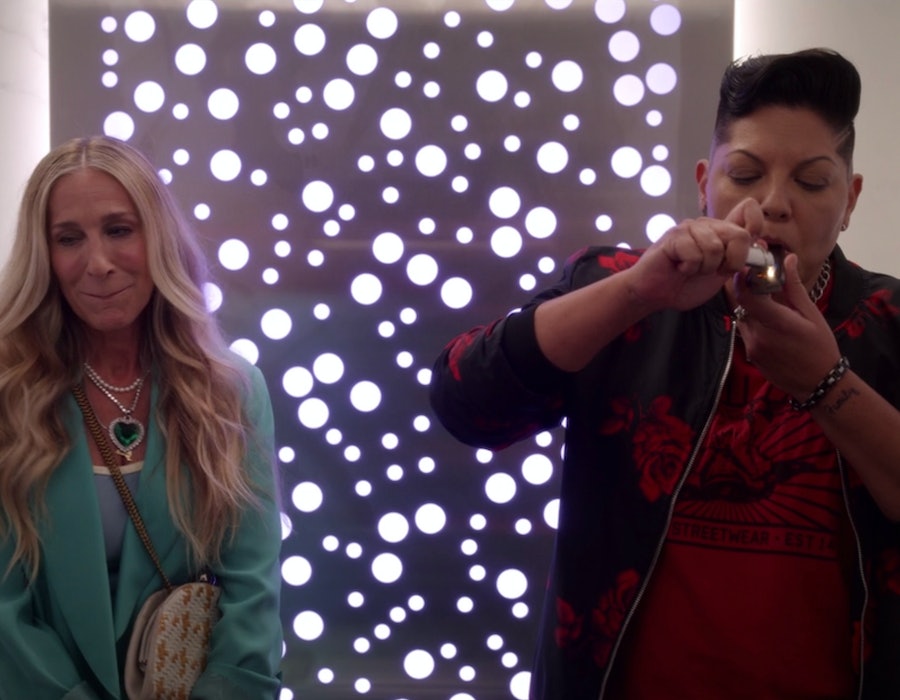 Che Diaz is... a lot. With their brazen entitlement, unhinged candor, and penchant for Pauly D-like bombers and graphic T’s, Sara Ramirez’s And Just Like That character is a bit like a terrifying combination of Glee’s Rachel Berry and Queer as Folk’s Brian Kinney. In only five episodes, they’ve already acquired the title as “the worst character on TV.”

But Che’s worst quality isn’t their shameless arrogance or manipulative charm or questionable early-aughts clothing choices. It’s their constant ripping of a weed pipe, in public and indoors, with no thought to who’s around them.

Never forget that within five minutes of their first appearance in And Just Like That, Che rides an elevator with Carrie — their employee — and bursts out a pipe, filling the cramped, windowless space with weed. In Episode 2, Che does the same at Big’s funeral — as if sparking up in the midst of a boomer’s burial is chill — then offers Miranda’s underage son Brady a hit. Since then, they’ve been seen shotgunning smoke into Miranda’s mouth in a crowded bar, and lighting up a joint in Carrie’s kitchen while she’s in the next room asleep and recovering from hip surgery. (Afterwards, Che proceeds to give Miranda the finger — wink, wink — but not before shotgunning in her mouth again.)

Ironically, I think Che’s public pot habits are supposed to show how cool they are — a signal of their disregard for decorum. But in practice, it’s just cringey; leave it to the show’s creators to make the show’s only nonbinary character more intolerable than Carrie. (While being nonbinary doesn’t exempt anyone from being unbearably annoying, when Che describes their abrasive attitude as a celebration of their identity, it seems like the writers are linking the two. A choice!) It also raises a host of troubling questions. Is Che really so dense that they think taking a fat hit in public is socially acceptable? Has it never occurred to them to, I don’t know, step outside before making a salad with the devil’s lettuce? Do vapes just not exist in this world?

All of this is coming from the perspective of a fellow stoner. I, too, have smoked weed in public once or one hundred times before. But the difference between me and Che Diaz is that I’m not a schmuck. There is an appropriate time and place to toke around strangers. At a Kacey Musgraves concert? Duh. At the funeral of an employee’s husband who’s just suffered a tragic, untimely death? Absolutely not.