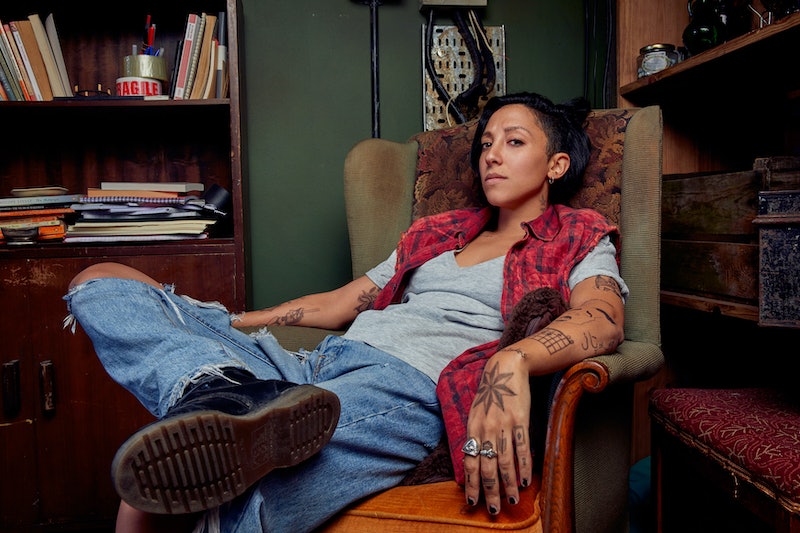 If you haven’t watched Channel 4’s newest comedy gold, We Are Lady Parts, you need to ASAP. Despite only premiering last week, the series has already received rave reviews from critics and fans alike. Created by Nida Manzoor, the six-part musical comedy focuses on a fictional all-female, Muslim punk band called Lady Parts, determined to make it big.

When Lady Parts’ frontwoman, Saira, played by Sarah Kameela Impey, decides their band needs a lead guitarist, the three-piece set out on a mission to find the perfect fit. Despite resistance from her bandmates, Saira is convinced anxious Amina (Anjana Vasan) is just the right addition to the group. But it’s Saira’s drive and passion for music that makes her certain she’s made the right decision. So, who is the actor who plays Saira, Sarah Kameela Impey?

A graduate from Arts Educational School of Acting, Impey is used to performing on stage with years of theatre experience under her belt. Her stage credits include The Life of Pi, The Tempest, A Midsummer Nights Dream, Pinocchio and The Gruffalo’s Child. According to IMDB, the actor has also starred in short films, The Second Chance and Samuell Benta's Perceptions.

Like her We Are Lady Parts character, Impey is also a professional singer, having sung as part of a soul indie band, A Blossom Fell, for six years. Speaking to Bustle, Impey shared how she had to adapt her singing voice for Lady Parts’ style of music.

“To learn to sing punk was like trying to shed all that stuff and it was so raw. I’d asked the universe if I could have a role where I get to play an instrument. So, when this guitar came into my hand, it was great.”

Saira is different to Impey’s previous roles, so decided to immerse herself in punk to truly tap into her character. Speaking to NME, she revealed that she “studied strong female lead singers and band players and watched music videos by London rockers Skinny Girl Diet.”

“I had to channel some real rage, so I would sit in my trailer and listen to these playlists,” she said.

As well as acting and singing, Impey is also a poet and has undergone professional aerial training with Upswing, a leading contemporary circus company. She also featured in the London 2012 Olympics closing ceremony as a dancer.