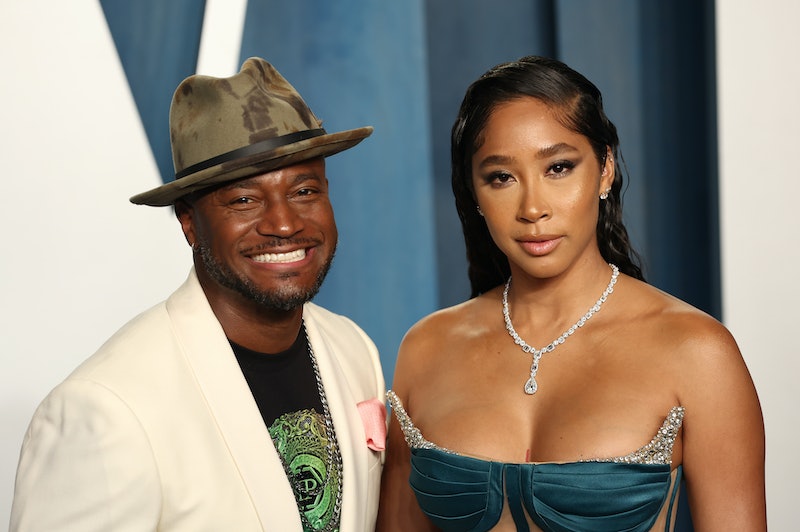 Given his role as the host of Hulu’s new dating show Back In the Groove, which follows three women in their 40s who check into a Dominican Republic hotel and find love with younger men, Taye Diggs should know a thing or two about dating. Luckily, his current relationship proves that he’s qualified for the job. The All American star is currently dating Love & Hip Hop star Apryl Jones, who he met in the most 2022 way imaginable.

The 50-year-old actor met the 35-year-old reality star through TikTok after he joined the platform in December 2021, at the insistence of his 12-year-old son Walker, and his videos quickly went viral. The two sparked dating rumors once she started making appearances on his TikTok page. “I literally saw one of her Instagrams or TikToks, and I just texted, or whatever it's called, and said that she was hilarious,” Diggs told Distractify in March 2022, without commenting on their relationship. “She helped me get a million followers. I love that stuff like that just kind of comes organically.”

A few months after they first started sharing TikToks, Diggs and Jones confirmed their relationship status by attending Vanity Fair’s annual Oscar party together in March. The pair now regularly support each other on red carpets, and they’re not shy about showing a little PDA.

While their romance may have started online, the couple tends to keep it more low-key on social media, with a few exceptions. In August, the actor professed his love for Jones in an Instagram video, even panning the camera to show her smiling and laughing at his words. “The fact that this woman is in love with me,” he said. “That's how I know, praise you, lord Jesus or buddha or universe, 'cause somehow she's next to me.”

Prior to dating Jones, Diggs was married to fellow Broadway star Idina Menzel for over a decade. The two wed in 2003 after seven years of dating and welcomed their son Walker together in September 2009, before eventually splitting in 2014. After his divorce, Diggs was in a relationship with Selling Sunset star Amanza Smith, which she revealed in October 2020. “I dated Taye for five years,” she told the Not Skinny But Not Fat podcast. “He took care of us.”

More like this
Selena Gomez Confirms She's Single Amid Drew Taggart Dating Rumors
By Martha Sorren, Jake Viswanath and Jack Irvin
Who Is Pete Davidson Dating? He & Chase Sui Wonders Got Caught Kissing
By Jake Viswanath
John Corbett's Wife Bo Derek Once Revealed If She's Team Aidan Or Team Big
By Alyssa Lapid
Jennifer Lopez Calls Moving In With Ben Affleck's Family An “Emotional Transition”
By Alyssa Lapid
Get Even More From Bustle — Sign Up For The Newsletter
From hair trends to relationship advice, our daily newsletter has everything you need to sound like a person who’s on TikTok, even if you aren’t.