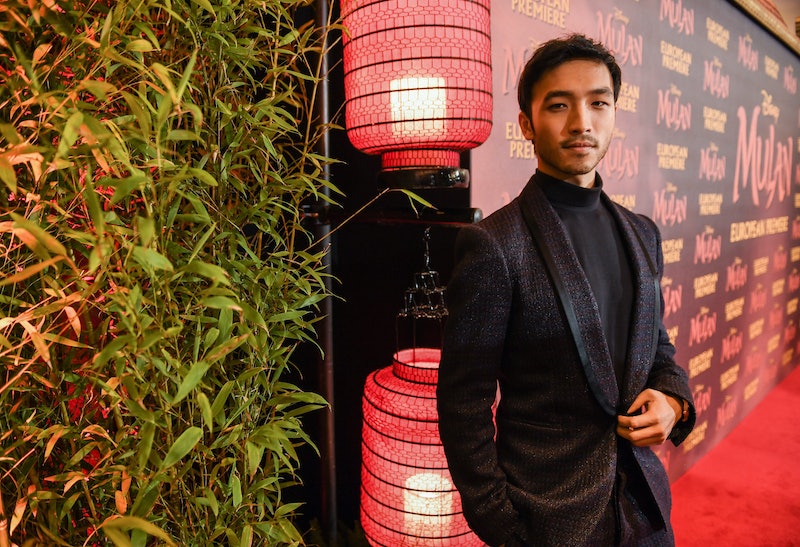 Fans gearing up to catch Mulan on Disney+ should already know that it's going to be quite a bit different from its 1998 animated counterpart. One of the biggest changes — aside from the lack of catchy show tunes — is Mulan's (Yifei Liu) love interest: Honghu (Yoson An). The character replaces Li Shang, Mulan's commanding officer and love interest from the animated film. While the decision to eliminate Li Shang might upset some die-hard fans, An's work in the film more than makes up for the character switch up. Read on for more about the actor behind Mulan's new beau.

An – who grew up in New Zealand after moving there from China – never planned on becoming an actor. "I didn’t think [I would become an actor] when I was a kid. But [my] musical theater hobby eventually turned into a passion," he told the South China Morning Post." I did four years of acting classes with my coach, [American actor] Michael Saccente. I was lucky enough to have various exciting projects come my way leading up to Mulan."

Landing his role as Honghu

Speaking with The Laughing Place, An touched on the lengthy audition process he went through to land his role as Honghu in Mulan. "I think it was back in 2015, or even late 2014, when I heard through the grapevine that Niki [Caro] was set to direct this [movie]," he told the outlet. "Then fast forward to 2016 – I did the [audition] tape, put it down, sent it through. And I didn’t hear back for a whole year. After a couple months, I’m like, 'I didn’t get this. There’s no way I got this. And whatever, it’s fine.' But then literally a year later I get an email from my agent going, 'Hey, remember that tape you put down a year ago? Disney wants to see you again.'"

It was only after another round of auditions and screen tests that An found out he'd gotten the role. "And after that, I didn’t hear back for another nine months," he also shared with the outlet. "And then one day I sat down at my agent’s office, and my lovely coach Mike sat down with me, and he was like, 'You got it, bud. You got it.' And I was like, 'Really? Really?' And everything just started unfolding from there."

His love of Mulan

An shared his early memories of the Mulan animated film withWWD back in February, saying, "I still remember watching it as a kid in my grandparents’ place for the first time and it just stuck with me. The tunes were catchy, everything was really catchy about it and cool seeing the Chinese culture that I grew up with in my early childhood on screen. But in the time that didn’t really click for me, but it still stayed with me. It’s one of my favorite animated movies."

He also reminisced with the South China Morning Post about his own connection to the sixth century poem, Ballad of Mulan, which was the inspiration for both versions of Mulan. "My mum recited the [original Ballad of Mulan] poem [composed around AD400] to me a few times [when I was growing up]; Disney’s live-action Mulan version closely aligns to the poem."

What else you'll see him in

Earlier in 2020, An co-starred in the BBC One miniseries The Luminaries. According to Radio Times the series, "Tells an epic story of love, murder and revenge, as men and women travelled across the world to make their fortunes. It is a 19th century tale of adventure and mystery, set on the Wild West Coast of New Zealand’s South Island in the boom years of the 1860s gold rush." An played Sook Yongsheng alongide Eve Hewson, Eva Green, and Himesh Patel.