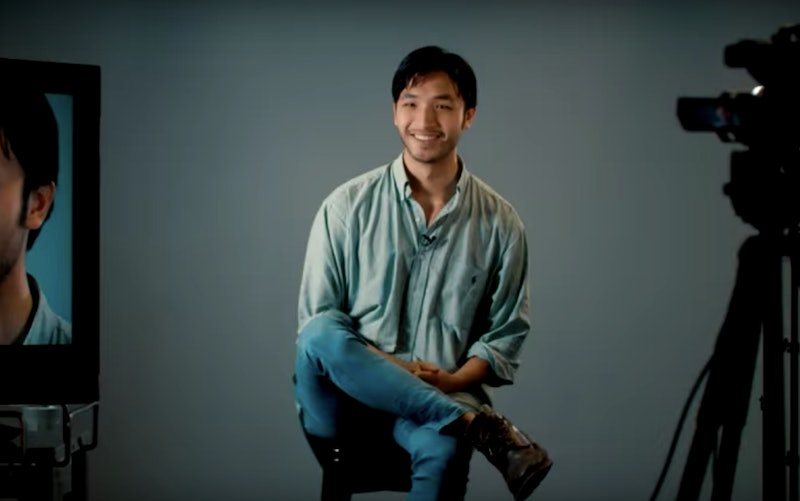 As details continue to emerge about, yet another, highly-anticipated Disney film remake, The Hollywood Reporter's announcement that Yoson An was cast love interest in the Mulan live-action remake is a surprise that is sure to make your heart swoon.

Deadline indicates that An, a New Zealand native, has signed on to the project as Chen Honghui, a military recruit who joins Commander Tung’s unit. The actor, who is reportedly of Chinese descent, will have a major role and is set to star opposite Liu Yifei (also known as Crystal Liu) who is slated to play the titular role of Hua Mulan. With just one look at his photos, you're definitely going to want to know more about the rising star ASAP.

As a relative newcomer to the entertainment industry, details about An's personal life and background are pretty scarce at the moment. Although that is sure to change once his name makes its way through the social media-sphere with the forthcoming release of Mulan. In a September 2017 Television New Zealand documentary entitled, Asian Men Talk About Sex, An speaks directly to the narrative of Asian men rarely being being put into lead acting roles. He explains, "You hardly see a Rom-Com where an Asian male is in the lead." While Mulan is not a romantic comedy per se, An will has certainly landed himself in a major lead role with a romanticized backdrop.

The website ProudlyAsianTheatre.com described An as "calm, collected but fiercely driven" in October 2017 and said that he "has been acting since 2012." The outlet also revealed that An is "a skilled martial artist and speaker of Cantonese and Mandarin." Although his age hasn't been officially revealed, a brief bio on AucklandActors.com lists his birth year as 1992.

If that doesn't want to make you search around to learn more about the actor, wait'll hear more about his Mulan storyline. An's character, Chen, will become an important accomplice to Mulan and an eventual love interest when she goes undercover as a male to prevent her father from having to join the military in a fight against the Hun invasion, according to THR.

Rumors about who will play Mulan's love interest for the reboot have been circulating throughout the web for quite some time now as many feared that the new storyline would phase out the relationship with her main love interest in the 1998 animated film, Li Shang.

While the chatter about Shang's absence from the film has never been confirmed, a Twitter account with the handle @nerdyasains posted a Mulan casting call this past April that seemed to signal his departure.

"saddened to report it’s basically been confirmed that li shang will not be in the live-action mulan.

the mulan casting call has been confirmed to be accurate. donnie yen was cast as “commander tung,” who is in the description for “chen honghui.”

The comments were accompanied by an image of a description for a character who goes by the name of Chen Honghui. Long before An's participation in the film was announced, the website Backstage.com also shared that Honghui's part will be a lead role in which casting directors are looking for someone in their 20s who is "strapping, cocky and handsome" and can speak "fluent English and Mandarin Chinese." While it seems that the film execs have found their man with Yoson An, the viral announcement sent the internet into a frenzy as it all but confirmed that there would be no room for Li Shang in the tale's storyline.

Sharing more about the character's background, the casting description continues: "Honghui is another recruit who joins Commander Tung’s unit, and he’s determined to be the best soldier in human history, full of himself, with a mean, bullying stream to him." The casting details share that Honghui will initially be Mulan's "chief rival" but indicates that Honghui is not immediately aware that she is woman. It continues,

"Grittily determined to be simply the best at everything, Honghui is increasingly peeved by Mulan’s ability to match or out-maneuver him, but after learning that his rival is a woman, his intense feelings of rivalry turn into something very different, something like love."

Yoson An joins a lineup which will feature a predominantly Chinese cast with Jet Li, Gong Li, Ron Yuan, Xana Tang and Donnie Yen already attached. As a newcomer on the acting scene, Yoson An will mark his studio feature debut with his appearance in this summer's shark thriller The Meg, which is due to be released in August, according to Deadline.

Although fans may still be reeling from the presumed departure of Li Shang's character, getting to know more about Yoson An ahead of the movie's scheduled 2020 release should prove to provide a bit of comfort.