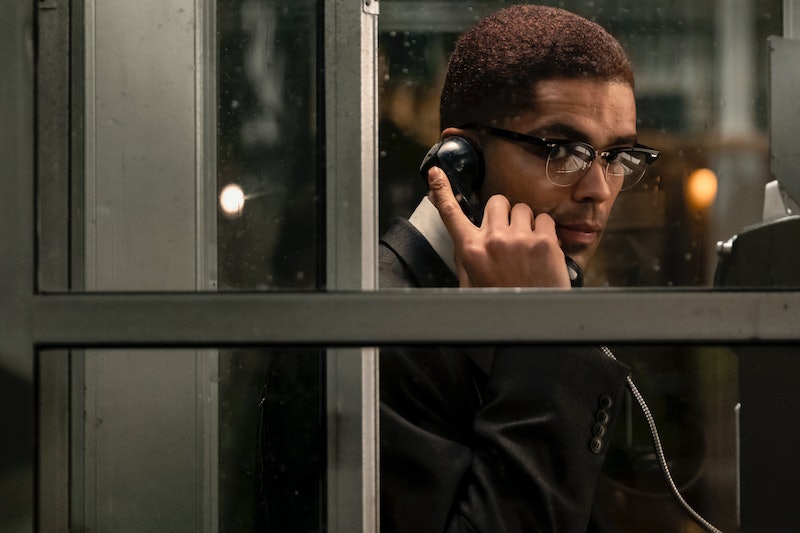 There have been a few memorable portrayals of Malcolm X on the big screen over the years. Morgan Freeman played him in the 1981 TV movie Death of a Prophet. Nigel Thatch took on the role in 2015's Selma, while Mario Van Peebles also did in 2001's Ali. The most memorable, of course, is Denzel Washington's Oscar-nominated portrayal in Spike Lee's 1992 film Malcolm X. This year, yet another actor is about to take the reins of the famous civil rights activist, and his performance certainly shines just as brightly the others.

Regina King's directorial debut, One Night in Miami, streaming on Amazon, follows an eventful evening with boxer Cassius Clay (soon to change his name to Muhammad Ali), musician Sam Cooke, NFL football player Jim Brown, and activist Malcolm X. Based on the play of the same name written by Kemp Powers, One Night in Miami presents a fictionalized version of a very real after-party in which the four iconic Black men spent the night celebrating Clay's 1964 heavyweight title win. But the evening doesn't go exactly as planned, as the foursome discuss arts, activism, and duty during the tumultuous '60s. So who plays Malcolm X in One Night in Miami? A popular TV actor is about to make a big-screen smash.

King found her Malcolm X in British actor Kingsley Ben-Adir. Ironically, the Brit is probably most well known stateside for playing President Barack Obama in the miniseries The Comey Rule. Ben-Adir has also acted in tons of other TV, including Peaky Blinders, The OA, High Fidelity, and Deep State, according to IMDb.

As King says in the film's press notes, a lot of actors were hesitant to take on the role of Malcolm X, mostly because of the inevitable comparisons to Washington. But Ben-Adir, she says, "embraced this as an opportunity to tell this story with a perspective that is different...He plays a Malcolm we haven’t seen before. We forget that he’s a father. A lot of us didn’t know that Malcolm laughed, that he was a bit of a jokester, and Kingsley did all this research and applied those little nuggets that he picked up."

To prep for the last-minute audition, Ben-Adir spent a weekend listening to Malcolm X's most famous speeches. "At the same time I was looking at the scenes in the script and trying to link them and find a way to make it feel truthful and real," he says in the press details.

Once he landed the role, he had just 12 days to prepare, but that energetic dive into the material is what inspired him, he tells Original Cin. "What really got me excited was the conversation between Malcolm and Sam Cooke...this is an exploration of these men on one night in the middle of one specific conversation. So, when I read the script I thought, 'Wow, this is really Malcolm in a different setting in the way that we haven't seen him before.'"

One Night in Miami offers up not only a whole new way of looking at Malcolm X but introduces Ben-Adir to a whole new audience.

More like this
Here’s Everything Coming To & Leaving Netflix In February
By Jake Viswanath
Yes, You Can Stream ‘To Leslie’ In The UK Now
By Sam Ramsden
11 Movies To Watch At The 2023 Sundance Film Festival
By Chloe Foussianes
Owen Thiele Asked Sundance Attendees About Films That Don’t Exist
By Grace Wehniainen
Get Even More From Bustle — Sign Up For The Newsletter
From hair trends to relationship advice, our daily newsletter has everything you need to sound like a person who’s on TikTok, even if you aren’t.