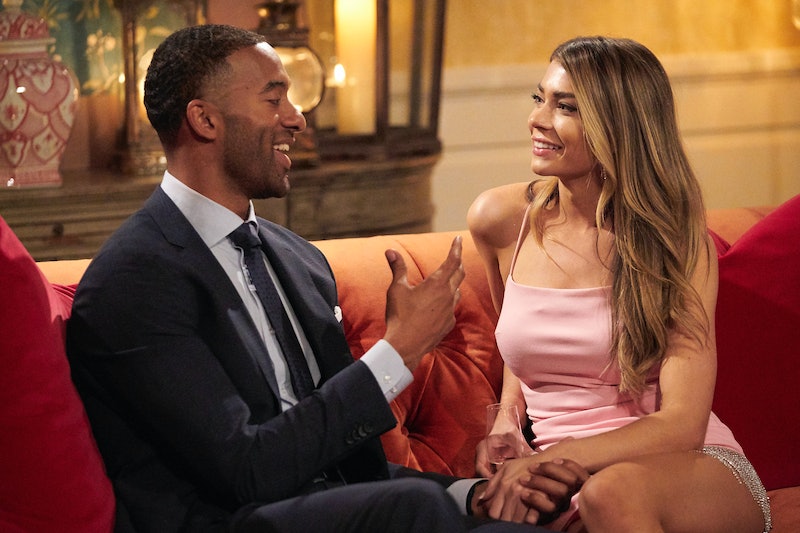 Unlike Clare Crawley and Tayshia Adams' men, Matt James' Bachelor crew isn't stranded in the exhausting desert heat. Still, one of his contestants passed out during the Jan. 11 episode. Sarah Trott, who landed a one-on-one-date with Matt this week, fell backward during the second rose ceremony. As shown tonight, she started to question her relationship with Matt after her date, and multiple women were "spiraling out of control" during the remainder of the episode. Sarah did share an emotional moment with Matt during their deep chat, so it's possible the whole thing was too much for her to handle.

The moment came after villainous "Queen" Victoria monopolized the cocktail party with her Marylynn roommate drama. “I’m so grateful I have a rose because Victoria is ruining the night," Sarah said in a confessional. She added that she was feeling "overwhelmed." Shortly after that, cameras panned to her eyes fluttering and her nearly falling off the back riser at the rose ceremony.

Luckily, someone immediately rushed to her side, guided her off-screen, and told her to sit down. Then, the cameras turned sideways, Matt followed, and they were joined by a medic. "I'm seeing stars," Sarah said from the floor. "I'm blacking out. I can't see." The episode abruptly ended with a "To be continued...." slide, and Twitter is still wrapping its head around what just happened.

Hopefully, Sarah recovered shortly after, but it looks like unless someone speaks to the press or takes to their social media, fans won't have answers until next week. Like ABC said, to be continued...

More like this
Why Wasn't Teddi At The 'Bachelor In Paradise' Reunion?
By Brad Witter
Mara Hung Out With These 'Bachelor' Friends Before Joining 'Paradise'
By Grace Wehniainen
Babatunde Aléshé Had The Most Relatable First Date With His Wife
By Sophie McEvoy
Michael & Danielle Reveal A Pivotal 'BiP' Moment We Didn't See Onscreen
By Kadin Burnett and Grace Wehniainen
Get Even More From Bustle — Sign Up For The Newsletter