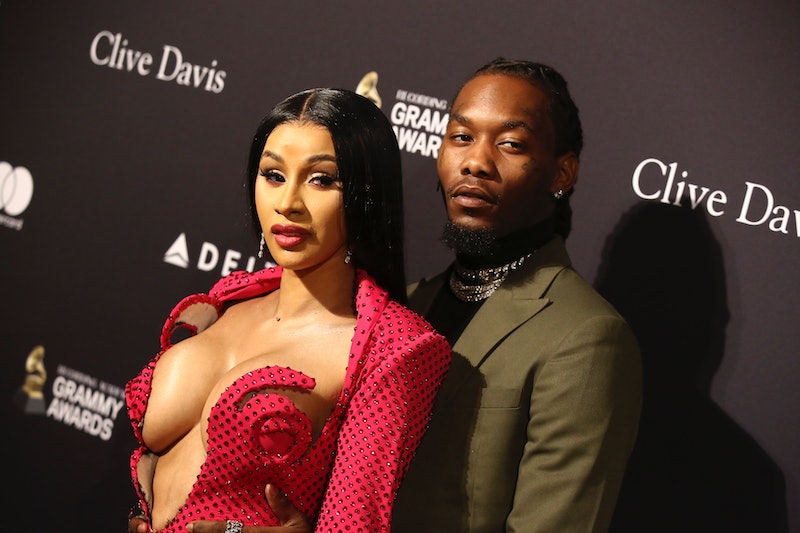 Cardi B wants to set the record straight about the end of her marriage. While speaking with fans during an Instagram Live on Friday, Sept. 18, Cardi B revealed the real reason she filed for divorce from Offset after three years of marriage, explaining that the rumors of her husband's reported infidelities were untrue and unrelated to the split. "I wanted to let y’all know I have shed not one tear," the rapper explained, before explaining that this is the first time that she hasn't gotten emotional over seeing reports about her marital issues in the press.

"This time, I wasn’t crying. You want to know why? The reason for my divorce is not because of none of that sh*t that ever happened before. It’s not because of cheating," Cardi said, calling recent rumors that Offset was expecting a baby with another woman "a complete lie. That’s the second time people are trying to pin babies over here. No, that’s bullsh*t." Instead, she revealed that she decided to file for divorce because she was just "tired of ... arguing" with her husband, and realized that it was best for them to go their separate ways.

"I got tired of not seeing things eye to eye," Cardi — who shares 2-year-old daughter Kulture with Offset — said. "When you feel like it’s just not the same anymore, before you actually get cheated on, I’d rather just leave. Nothing crazy, out-of-this-world happened, sometimes people really do grow apart. ... sometimes you’re just tired of the arguments and the build up. You get tired sometimes and before something happens, you leave."

Cardi and Offset began dating in February 2017 and secretly tied the knot in September of the same year, though they didn't actually confirm their marriage until December 2018. Around the same time, rumors of Offset's alleged infidelity began swirling, though Cardi defended him on social media, and ultimately decided to stay in the relationship. "No, it’s not right for a [man] to cheat…But what you want me to do?" she wrote on Twitter at the time, adding, "This sh** happens to everyone and I be too, you too…People handle they relationship different so."

However, by the end of that year — after they welcomed baby Kulture in June 2018 — Cardi and Offset had broken up, amid even more reports of the Migos rapper's infidelity. "We are really good friends and we are really good business partners ... but things just haven’t been working out between us for a long time," she said in a since-deleted Instagram video announcing the split. "It’s nobody fault I guess we just grew out of love, but we are not together anymore. It might take time to get a divorce and I’m going to always have a lot of love for him because he is my daughter's father."

The split was short-lived though. After a very public campaign by Offset in order to win Cardi back, the couple confirmed that they had reconciled in early 2019. "When me and my husband got into our issues — you know, he cheated and everything — and I decided to stay with him and work together with him, a lot of people were so mad at me; a lot of women felt disappointed in me," Cardi explained during a January 2020 interview with Vogue. "But it’s real-life sh*t. ... People that be in marriages for years, when they say till death do us part, they not talking about little arguments like if you leave the fridge open. That’s including everything."

"Everybody has issues. I believe in forgiveness. I prayed on it," she continued, noting that she and Offset ultimately decided that it was "us against the world" and reached a new place in their relationship. "He has my back for everything, I have his back for everything ... We have come to a clear understanding. For me, monogamy is the only way. I’ll beat your ass if you cheat on me."