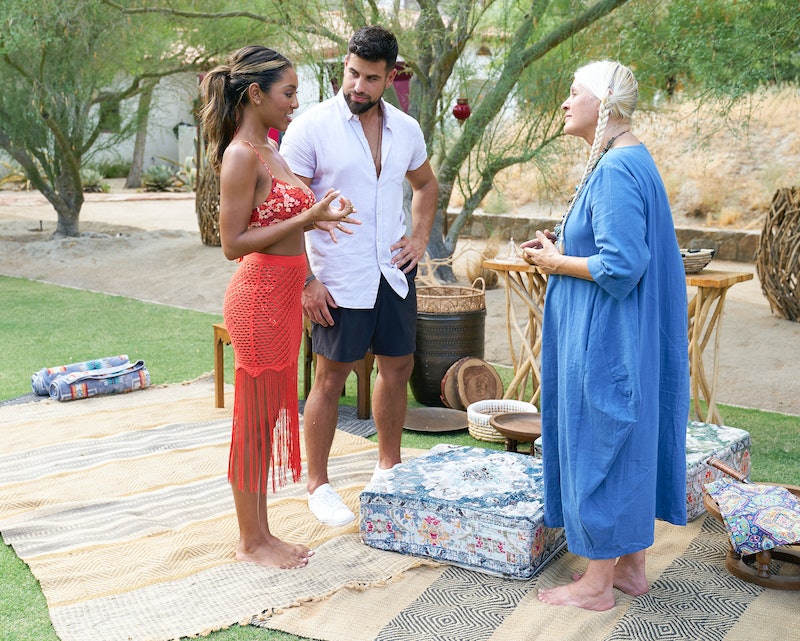 As Tayshia Adams gets down to her final few guys on The Bachelorette, she's doing everything she can to gain clarity. And what better way to do so than through a chakra reading? During their first (and only) one-on-one date, Tayshia took Blake Moynes on a spiritual journey... that ultimately revealed he wasn't the one for her. Tayshia sent Blake home shortly thereafter, and tearfully returned to La Quinta.

During their reading, the pair did a tantric breathing exercise that revealed how much they can connect. With her legs wrapped around Blake's torso, Tayshia looked deep into Blake's eyes and realized the connection wasn't there. So she sent him home before they even got to dinner.

The news took Blake by surprise, as he thought the exercise put them exactly where they needed to be. Tayshia, clearly uncomfortable, told him that she disagreed, especially knowing that hometowns are so soon. “I just don’t know if I can get there," she told him. "It’s not that you’re not an incredible guy, I just don’t know if like, the timing was off for us. I think it’s — I think it’s time we go our separate ways.”

Tayshia then got emotional, feeling guilty for sending Blake home. "He's such a good guy," she said in a confessional. “But I know that there’s other relationships that my heart is more invested in." Shortly after that, she sent Riley home for the same reasons in an equally sob-ridden goodbye. Naturally, fans had reactions on Twitter.

It's a tough job, being the Bachelorette.