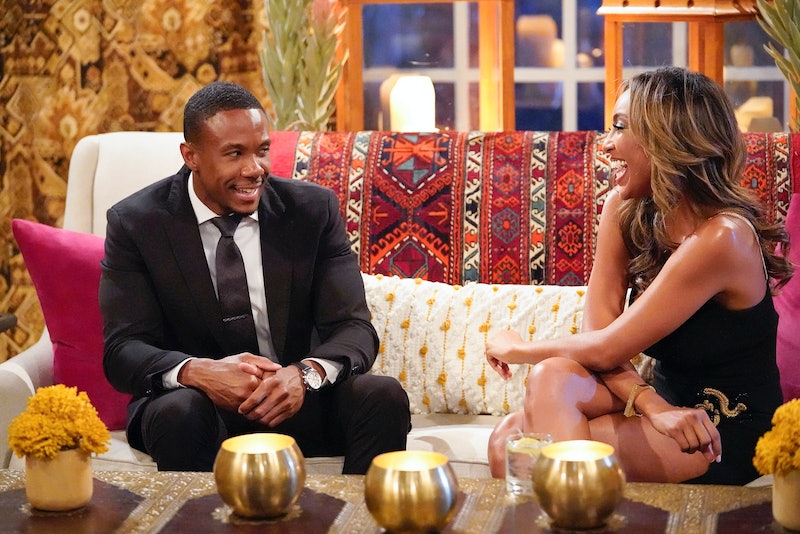 They say when you know, you know — and The Bachelorette proved that phrase applies to breakups as well. After an eye-opening one-on-one date with Blake, Tayshia sent Riley home ahead of the Rose Ceremony after realizing that her connection with him also wasn't strong enough for her to feel comfortable meeting his family. "Today it hit me that hometowns are next week," a tearful Tayshia told him after pulling him away from the rest of the group. "I know how much [meeting your family] means to you. I don’t want to put you in that position if my heart isn’t 100 percent matching yours."

Though she had plenty of kind words for the attorney, telling Riley that she felt "comforted" by him, Tayshia ultimately felt that she had stronger relationships with some of the other men. "I felt like we were finally breaking through with these last couple of conversations that we had," she said, but it all just happened too late. Still, it was clear she had genuine affection for Riley, as she kept repeating that she didn't want to hurt him.

Unfortunately, Riley — and all of the viewers watching at home — were indeed, hurt by the breakup. Naturally, Twitter is mourning the loss of a key voice of reason in La Quinta, crying the same amount of tears that Tayshia herself shed.

Riley's elimination was particularly heartbreaking, as Tayshia recognized how difficult it had been for him to open up to her about his complicated relationship with his family and his vulnerabilities. "I really, truly care about you and I want you to find that person that makes your heart sing so loud," she told Riley, before encouraging him to continue to open himself up to more people and possibilities going forward. "I need you to continue to be vulnerable, because this guy that I’ve seen the last couple of weeks is incredible."

Though Riley was clearly heartbroken, he handled things with grace — making everyone at home want to fall to the ground sobbing, a la Tayshia. "I didn’t have a lot of time to tell Tayshia how I truly felt," he told cameras as the Bachelorette walked him to the car. "I would tell her how beautiful she is, how strong she is, how confident she is."

He continued, "I would tell her that she is someone that I could see myself spending the rest of my life with. At the end of the day, I felt like, and I still feel like, Tayshia is the one for me." And then, with one last, sob-inducing line, Riley left: "This is your journey, and I’m happy to have met you," he told Tayshia. "I don’t regret that at all."

Thankfully, it seems like Riley's heart is on the mend, as he thanked everyone for their support on his Instagram Story on Monday night. "Thank you to everybody that reached out to me this week," he told his followers. "I really appreciate y'all. It means more than you know."