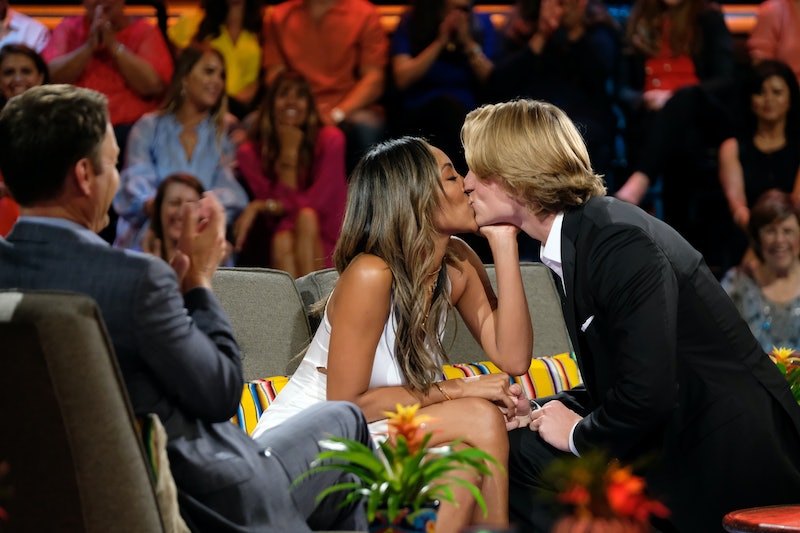 Before rumors began swirling that Tayshia Adams replaces Clare Crawley as this season's Bachelorette, she found love with John Paul Jones on Season 6 of Bachelor in Paradise. They actually split before leaving the beach but reconciled upon returning home, which was revealed during the BiP reunion special. The pair dated for almost two months, announcing their breakup on Oct. 30, 2019.

Tayshia revealed the news to fans in a since-deleted Instagram post, insisting that she and JPJ "had something incredibly special" and that their relationship became a "whirlwind" after Paradise, per Us Weekly. "When the show ended, I truly went back to Maryland to see if what we had was something we could build on without cameras, a production crew, and without feeling any pressure: to simply figure things out on our own terms," she wrote. But living on opposite coasts took its toll. "We truly did the best we could," she continued, adding that they're still "the best of friends and will continue to remain in each other’s life."

Two weeks before Tayshia announced their split, JPJ told Us Weekly that he'd just moved to Los Angeles for work and that being only an hour and a half away from Tayshia "was a big draw." He added, “I’m excited to consistently see my girlfriend who I’ve been dating from across the country." That obviously didn't last long. Following Tayshia's post, JPJ gave his side of the story on the Reality Life with Kate Casey podcast. "We have so much going on in our personal lives it is very difficult to focus on a serious relationship," he shared.

In an interview on the Bachelor Happy Hour podcast, Tayshia made it clear that JPJ did not move to L.A. for their relationship. “The fact that that’s the headline really does piss me off," she said, adding that she'd never ask someone to move for her unless their relationship was serious. “He moved here because he wanted to be an actor and because he is getting auditions," she explained.

Still, she had nothing negative to say about JPJ and cited communication issues as the main cause of their breakup. “I’m very much so over-communicative," she said on the podcast, adding that they relied heavily on FaceTime. "I told him, I’m like honestly, ‘I just want you to experience a little more life. I feel like you just need to live a little bit and learn a little bit because I feel like I can only do so much."

JPJ appears to be single at the moment. A source told Us Weekly that he went on a date with model Victoria Rose Strehlow in January, and though he posted a photo with her on Instagram, nothing seems to have come of it. Who knows, he might be holding out for his own shot at being the Bachelor.

More like this
Zach Explained Why He Had To Send Bailey Home Early On 'The Bachelor'
By Brad Witter
All The Clues Clint & Gina Aren’t Still Together After 'MAFS' Season 16
By Brad Witter
Mack & Domynique Reportedly Had An "Epic" Breakup On 'Married At First Sight'
By Brad Witter
Love Is Blind’s Natalie Claims Shayne Signed Up For 'Perfect Match' While They Were “Still Together”
By Brad Witter
Get Even More From Bustle — Sign Up For The Newsletter
From hair trends to relationship advice, our daily newsletter has everything you need to sound like a person who’s on TikTok, even if you aren’t.