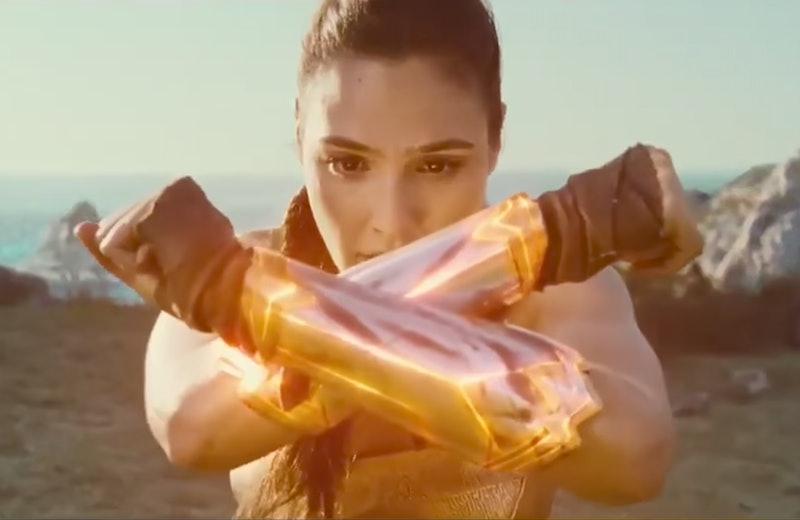 Wonder Woman's signature steel bracelets have been a key part of the superhero's outfit since 1941. Everyone knows that they're bulletproof and major assets to her fighting prowess, but even diehard fans might be surprised to learn why Wonder Woman's bracelets glow in the new movie. According to ScreenRant, the reason the hero's bracelets glow throughout the film is that they're depicting her releasing energy, blasting her opponents, as seen in the fourth Wonder Woman trailer at the :08 second mark. How cool is that?

The steel cuffs are fixtures for all Amazon women by the time they're 15, according to Fandom. For Wonder Woman, the bracelets give her the power to be defended against bullets other ammunition launched by enemies. Her cuffs are also known as Bracelets of Submission, which remind all Amazon women from Wonder Woman's female-only island of Themyscira to stay far away from men, according to Movie Pilot. Yet while they all receive irremovable cuffs, only Diana's have the power forged by Zeus himself, according to Screen Rant, to deter her opponents and wield a lightning blast that's out of this world.

In the trailer below, you can see Diana's cuffs in action as she deflects bullets. But they're not her only weapon, of course; the hero's other equipment includes her glowing lasso of truth, armor, and a magical sword. Her powers go far beyond what she carries in the trailer.

With Wonder Woman 1984, Diana's certainly levelled up her superhero abilities, and one of the neatest tricks she shows off is in a slow-motion shot shown in the trailer. In it, she pulls the slide on someone's pistol, ejecting a bullet. Then, she moves to backhand the bullet with her bracelet, possibly to fire it off at something — or someone — else. It's a slick combat move, to be sure, and a neat, close-quarters variant of the bullet deflecting she showed off in the iconic No Man's Land scene from Wonder Woman.