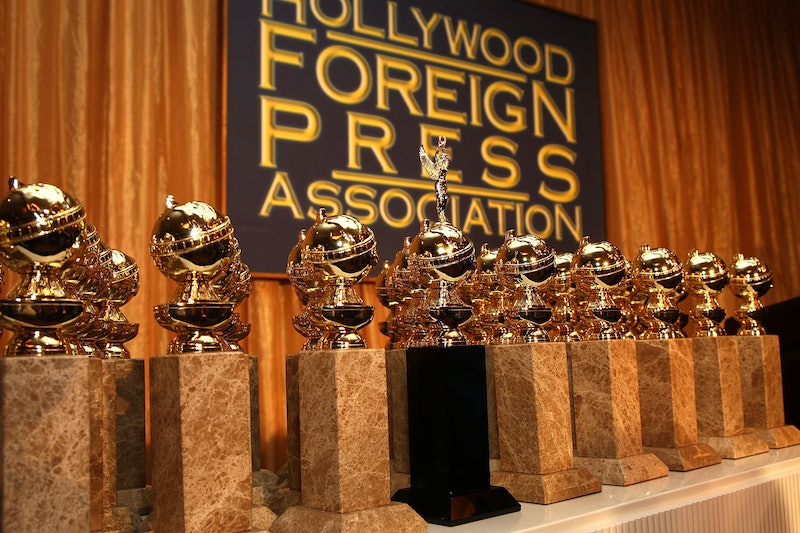 The 2021 Golden Globes nominations were announced on Wednesday, Feb. 3, meaning that many Hollywood homes are celebrating while others contemplate what went wrong. The 2021 Golden Globes snubs reveal an eyebrow-raising pattern, one that's especially concerning for the future of diversity and representation in Hollywood.

The Globes' TV nominations proved Black stories and actors generally fell by the wayside, with widely-predicted contenders, like Michaela Coel's I May Destroy You, getting nothing. In fact, Don Cheadle and John Boyega were the only two Black actors to get nominated in the TV categories, for Black Monday and Small Axe, respectively. Only two other people of color joined them: Ramy Youssef for Ramy and Anya Taylor-Joy, who identifies as Latina, for The Queen's Gambit.

The film side fared much better, with actors like Viola Davis, Andra Day, Daniel Kaluuya, and the late Chadwick Boseman all receiving nominations. However, there were still points of contention, especially in light of Regina King being one of three women nominated for Best Director. Her film One Night In Miami... is missing from Best Drama Film, among other Black-led films. The Globes are known for throwing some curveballs at the beginning of awards season, but this time, they seem to only affect diverse stories, as evidenced by this year's snubs:

I May Destroy You

Pundits were divided about I May Destroy You's chances in the Best Limited Series category, but most expected at least one acknowledgment for Michaela Coel, who created and starred in the hugely acclaimed HBO series about the aftermath of rape. To the horror of fans, the show was snubbed completely, marking a huge loss for both Black stories and the importance of sexual assault awareness. Here's hoping the Emmys will right this wrong.

While P-Valley, which tells the stories of women who work at a Mississippi strip club, was predicted by some to fly under the radar, fans were still disappointed to learn the Starz series didn't get any love. Created by Katori Hall, a Black woman, and directed solely by women, the show would've been taken to new heights with a Globes nod.

Never Have I Ever

After failing to get any love at the Emmys, the HFPA had the chance to rectify that problem and recognize Mindy Kaling's well-received Netflix comedy about an Indian teenager navigating her way through life, love, and adolescence. Sadly, Never Have I Ever didn't receive a single nod, making yet another loss for severely-needed Indian representation.

Aduba seemed like a shoo-in for the TV Best Supporting Actress category after taking home the Emmy for her Mrs. America performance as Shirley Chisholm, the first-ever Black Congresswoman. She was outright snubbed as her costar Cate Blanchett landed a nom (deservingly so, to her credit) for her role as conservative activist Phyllis Schlafly. Still, it makes you wonder.

Spike Lee's Netflix film about four Black Vietnam War veterans who return to the country to mourn their former leader was a predicted contender for many drama categories. Shockingly, Da 5 Bloods was shut out completely, with the Hollywood Foreign Press Association not even mustering a directing nod for Lee or an acting nod for Delroy Lindo, who delivered one of the best performances of his impressive career.

Every Other Black Ensemble Film

Aside from Da 5 Bloods, three other acclaimed Black ensemble films — One Night in Miami..., Ma Rainey's Black Bottom, and Judas and the Black Messiah — were seen as strong contenders for Best Drama Film. While they were recognized in other categories, including a landmark Best Director nod for King and a posthumous Best Actor nomination for Boseman, the HFPA failed to nominate any of them for the biggest prize. Not one. Hopefully, the Oscars don't follow suit.

More like this
Pamela Anderson’s Dating & Marriage History Could Be Its Own TV Series
By Jake Viswanath
Here’s Everything Coming To & Leaving Netflix In February
By Jake Viswanath
Here’s Why Danny Masterson’s Hyde Isn’t In 'That '90s Show'
By Brad Witter
'The Crown' Season 6 Has Suspended Filming "Out Of Respect" For The Queen's Death
By Bustle Staff
Get Even More From Bustle — Sign Up For The Newsletter
From hair trends to relationship advice, our daily newsletter has everything you need to sound like a person who’s on TikTok, even if you aren’t.