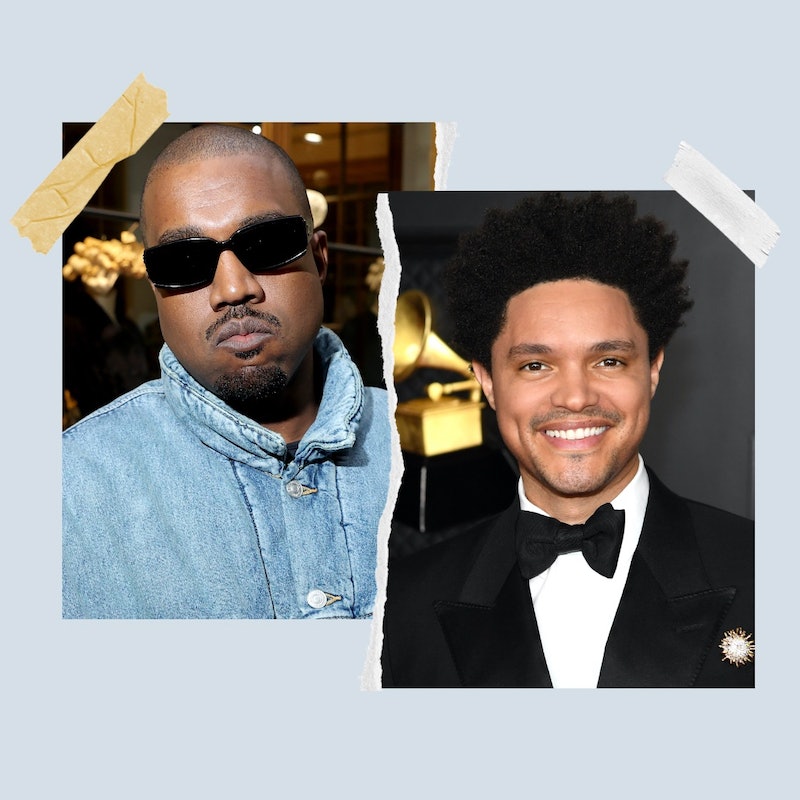 Kanye West’s feud with the Grammys is one for the history books. While he may have garnered an impressive 75 nominations and 22 wins across his illustrious career, his relationship with the Recording Academy is a bit rocky (remember when Ye peed on his Grammy for Jesus Is King?). It all came to a head before the 2022 Grammys, where West has been barred from performing after attacking Grammys host Trevor Noah on Instagram using a racial slur and subsequently getting suspended from the social media platform.

West was already dealing with public criticism for his Instagram posts about estranged wife Kim Kardashian and her boyfriend Pete Davidson, which garnered him accusations of harassment from many, including Noah. However, the final straw seemed to be when West went after Noah over his opinions, which got him removed from both Instagram and the Grammys performer lineup. And given West’s silence since the debacle, who knows if their issues will be resolved at the 2022 Grammys or whether Noah will bring it up during his opening monologue on April 3?

Why Is Kanye West Not Performing At The Grammys?

On March 19, Variety reported that West was barred from performing at the 2022 Grammys. West’s rep confirmed a story from The Blast that stated the rapper’s team has received a call from the Recording Academy informing that they had “unfortunately” removed him from the performers lineup due to his “concerning online behavior.” Just a day prior, West had been suspended from Instagram for using a racial slur in a post attacking Noah.

Is Kanye West Attending The Grammys?

While West is barred from performing at the Grammys, he has still been invited to attend the show, given how he received five nominations this year, including a nod for the coveted Album of the Year. West has not indicated whether he will attend the awards or not.

What Did Trevor Noah Say About Kanye West?

The post that got West suspended was in retaliation to a segment on The Daily Show, where Noah commented on the situation between West, Kardashian, and Davidson, and explained how many women face harassment when trying to leave a relationship. “Over time, Kanye has become more and more belligerent in how he tries to get Kim back,” he said, referring to the time West sent a truck of roses unannounced to Kardashian’s home. “I’ll be honest with you, what I see from this situation [is] a woman who wants to live her life without being harassed by an ex-boyfriend or an ex-husband or an ex-anything.”

Why Was Trevor Noah Blamed For Kanye West’s Grammys Ban?

Adding fuel to the fire, rapper The Game came to West’s defense in an Instagram post, speculating that the Grammys cancelation “could be because [Noah] is hosting and there was a conversation held amongst his team & the academy that led to the decision.” He continued, “Speak your mind in this country for yourself, family or your people & you’re ostracized immediately & if you push them hard enough they will stop at no ends to try and put an end to you as a whole.”

However, on March 20, Noah denied that he had anything to do with the Recording Academy’s decision to call off West’s performance.

“I said counsel Kanye not cancel Kanye,” he tweeted. West has not responded to Noah’s latest remarks.

More like this
Grammys Host Trevor Noah Made Adele's Dream Of Meeting The Rock Come True
By Brad Witter
The Beyhive Is Mad At Harry Styles After Beyoncé’s Album Of The Year Snub
By Jake Viswanath
Beyoncé Has Officially Won The Most Grammys Ever & Twitter Is Losing It
By Jake Viswanath
9 Photos Of Celebrity Couples & Unexpected Duos At The 2023 Grammys
By Jake Viswanath
Get Even More From Bustle — Sign Up For The Newsletter
From hair trends to relationship advice, our daily newsletter has everything you need to sound like a person who’s on TikTok, even if you aren’t.