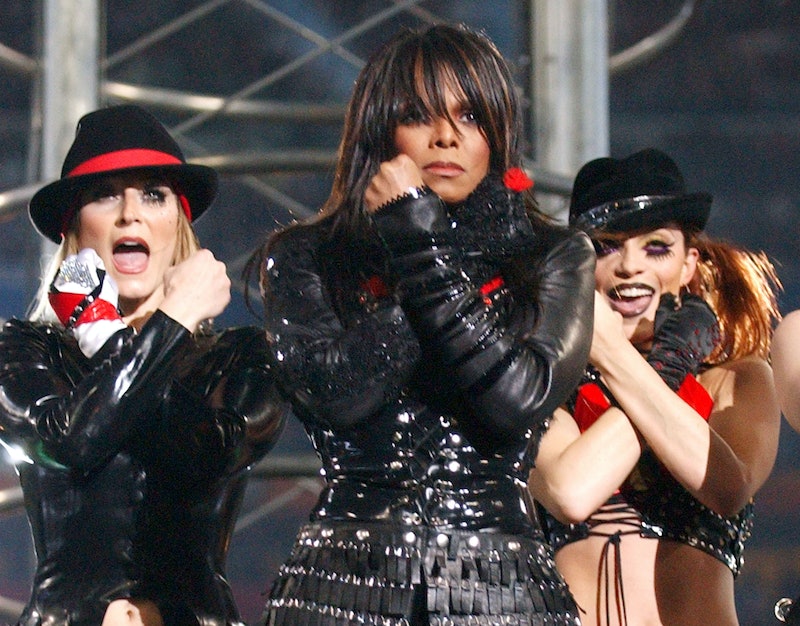 It's been 17 years since Super Bowl XXXVIII's Janet Jackson/Justin Timberlake wardrobe malfunction (aka "Nipplegate"). And for years, Jackson's fans have been tweeting #JanetJacksonAppreciationDay in attempt to reclaim the Super Bowl in her name. This year, however, it got a little more traction and began trending on Twitter — possibly because of "Framing Britney Spears," the latest episode in FX's documentary series The New York Times Presents.

Though the episode largely focuses on Spears' conservatorship, it also shows how Timberlake profited from the narrative surrounding he and Spears' breakup — in the same way many believe he did after Nipplegate. "The way that people treated [Britney], to be very high school about it, was like she was the school slut and he was the quarterback," New York Times writer Wesley Morris says in the episode.

The blowback that Jackson experienced after the Super Bowl was similarly more severe than anything Timberlake was subjected to. Though it was Timberlake who (inadvertently) exposed Jackson's right breast live on air, it's Jackson who has shouldered most of the blame. She had to release a public apology, stating "It was not my intention that it go as far as it did. I apologize to anyone offended." Timberlake, meanwhile, reportedly joked to Access Hollywood, "Hey man, we love giving you all something to talk about!"

Per Entertainment Weekly, Jackson's publicist later explained that the stunt was supposed to reveal only Jackson’s red bra, ”but the garment collapsed.” Afterward, Jackson was disinvited from the Grammy's the following weekend and has never been invited back to perform at the Super Bowl. She was also blacklisted by the company that owned Viacom (MTV) and CBS Radio and forced to resign from an ABC film, per SBNation. Timberlake, on the other hand, suffered no consequences to his career. He attended the Grammys and won two awards, performing at the Super Bowl again in 2018.

In the wake of "Framing Britney Spears," there seems to be renewed focus on Timberlake, whose career thrived at least partly because of how often the media has given him a pass. But fans are hoping that by spotlighting the women he's hurt, however unintentionally, that could change.

Others used the Janet Jackson hashtag to share footage of Jackson's iconic old performances, reminding everyone that yes, she was and still is a fantastic performer.

Timberlake did eventually apologize for the Super Bowl incident in 2006, admitting in an MTV interview that he "could’ve handled it better." He added, "If there was something I could have done in her defense that was more than I realized then, I would have ... I probably got 10% of the blame, and that says something about society."

Still, one fan had an idea for how society can finally give both Jackson and Spears their full due: let them perform a halftime show together.

More like this
The 2023 Super Bowl Commercials Feature A 'Breaking Bad' Reunion & Missy Elliott
By Alyssa Lapid
'Breaking Bad' Duo Walt & Jesse Are Back — In This Super Bowl Commercial
By Jake Viswanath
David Beckham’s Controversial Qatar Deal Skyrocketed His Net Worth
By Catharina Cheung
'The Queen’s Gambit' Season 2 Tweet Wasn’t From Anya Taylor-Joy
By Mary Kate McGrath, Jack Irvin and Grace Wehniainen
Get Even More From Bustle — Sign Up For The Newsletter
From hair trends to relationship advice, our daily newsletter has everything you need to sound like a person who’s on TikTok, even if you aren’t.