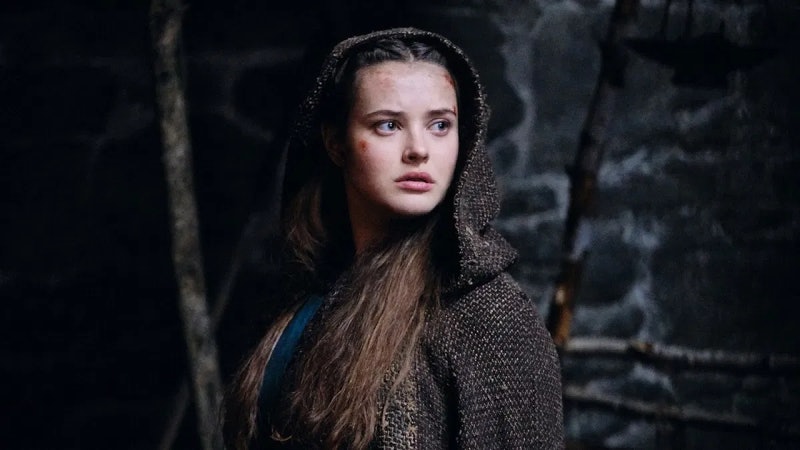 Last October author Thomas Wheeler and illustrator Frank Miller released their graphic novel, Cursed. And by the time of the book's publication, a Netflix adaptation had already been in the works for quite some time. Now, this feminist reimagining of the King Arthur legend is finally available on Netflix, leaving fans to wonder: will Cursed return for Season 2?

The show follows teen Nimue (Katherine Langford), daughter of her village's Arch Druid who improbably survived a childhood attack by a Dark God. When anti-magic religious group the Red Paladins burn down her village, her mother tasks her with delivering a cursed sword to Merlin (Gustaf Skarsgård). With the help of a young mercenary named Arthur (Devon Terrell) and several other familiar names of legend met along the way, Nimue learns to wield her powers, even as she makes her way towards her ultimate, tragic destiny as the Lady of the Lake.

Netflix tends to plays things extraordinarily close to the chest when it comes to announcements. So much so that Cursed had its official release date announced in early June, just a month before its July 2020 premiere. Before then, the streaming service announced it ordered ten episodes of the novel-based series back in March 2018 — over a full year before the novel debuted in October 2019. In a Barnes & Noble interview, Wheeler opened up about how Netflix got involved with the project. "Cursed was always envisioned as a publishing project first. The very next day after our meeting with [publisher] Simon & Schuster, we received a call from Netflix (I’m not sure how they knew about any of this, I assume they have spy satellites or something) enquiring about the rights to Cursed and our interest in possibly developing it as a TV series or feature," Wheeler reveals. "Frank and I demurred on both and continued working on the manuscript. But Netflix kept at it for a few months and, I guess it’s fair to say, wore us down. It seemed like a tantalizing yet mad experiment to attempt to tell this story in two different formats almost simultaneously."

There are no official announcements for a second Cursed novel or any word from Netflix on a second season. And as the show and novel storylines were developed in tandem — but aren't completely tethered to one another — news about the novel doesn't necessarily reflect anything happening with the show. But, as Wheeler recently revealed in an email to Bustle, Nimue's story will continue, one way or the other.

Fantasy fans will just have to wait and see whether Netflix wraps up an entire tale in ten episodes or extends the world for another season.

More like this
Netflix Shut Down 'Bridgerton' S3 Rumours About A “Very Dark” Storyline
By Bustle
'Wednesday' Star Emma Myers Thinks A Wenclair Storyline Is “Possible” In Season 2
By Alyssa Lapid
The 'Freeridge' Cast Shared Their Hopes For A Potential Season 2
By Grace Wehniainen
Everything To Know About 'Cobra Kai' Season 6
By Brad Witter
Get Even More From Bustle — Sign Up For The Newsletter
From hair trends to relationship advice, our daily newsletter has everything you need to sound like a person who’s on TikTok, even if you aren’t.

This article was originally published on July 17, 2020