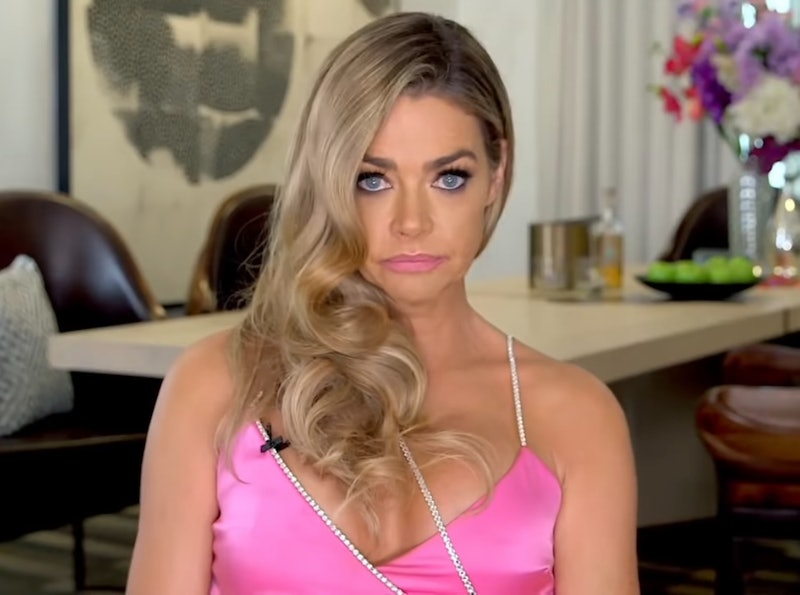 Though Denise Richards left The Real Housewives of Beverly Hills before Season 11, she’s remained a hot topic of conversation on the show — particularly between Garcelle Beauvais and Lisa Rinna. The two have argued repeatedly about how Lisa handled Denise’s controversy with Brandi Glanville in Season 10, leading Garcelle to make a cheeky comment about the situation on a June episode of What Happens Live. Speaking to host Andy Cohen, Garcelle revealed that Denise “wants to come back” to the series, but that someone else in the cast would have to “go.”

“Are her initials LR?” Cohen asked, to which Garcelle simply laughed.

Initially, Cohen seemed open to the idea of Denise returning, telling Garcelle that they should “talk after the show.” However, after hearing the conditions, he walked back a bit on the possibility. “That doesn’t always work when someone says, ‘If you take this one out, I’ll come back,’” he said.

When it was initially announced that Denise was leaving RHOBH, Cohen told People that he was “sad” Bravo “couldn’t reach an agreement” with her and that he was “kind of living in that sadness.” Denise, for her part, recently told Entertainment Tonight that she’d “never say never” to returning, but was pretty explicit about her opinion on the cast. “I liked being a part of the show, and I had fun with most of the women, not all!" she said.

Denise added that she’d seen some of RHOBH Season 11 and was aware that Garcelle and Lisa had been talking about her. “I am going to ask them, ‘Do I get paid for every time my name comes up?’” she joked to ET.

Brandi’s accusations that she and Denise had an affair became a flashpoint in Season 10, with Denise repeatedly denying anything had happened between them and later refusing to keep filming. When she announced her exit from the series in 2020, a source close to Denise told People that she was looking forward to spending quality time with her husband Aaron Phypers and daughters Eloise, 10, Lola Rose, 16, and Sami, 17. However, if Denise does decided to return to RHOBH, her family life could provide fodder for a future storyline: her ex-husband Charlie Sheen, with whom she shares her two eldest daughters, recently “blindsided” her with a court filing that resulted in a judge agreeing to reduce his child support payments to “zero dollars per month,” according to legal documents obtained by People.

The October ruling follows allegations that Sami made on TikTok claiming that she’d been “trapped in an abusive household” and had moved in with her father to escape Denise and Aaron’s “hell house.” A source told ET that Denise’s "heart [was] broken" about the accusations, while another told People that Denise’s other daughter Lola “does not live with Charlie” but stays with him when Denise is out of town.

It remains to be seen whether or not Denise and Bravo will go back to the bargaining table for Season 12, but her family drama will likely factor into her decision — as will Lisa Rinna.