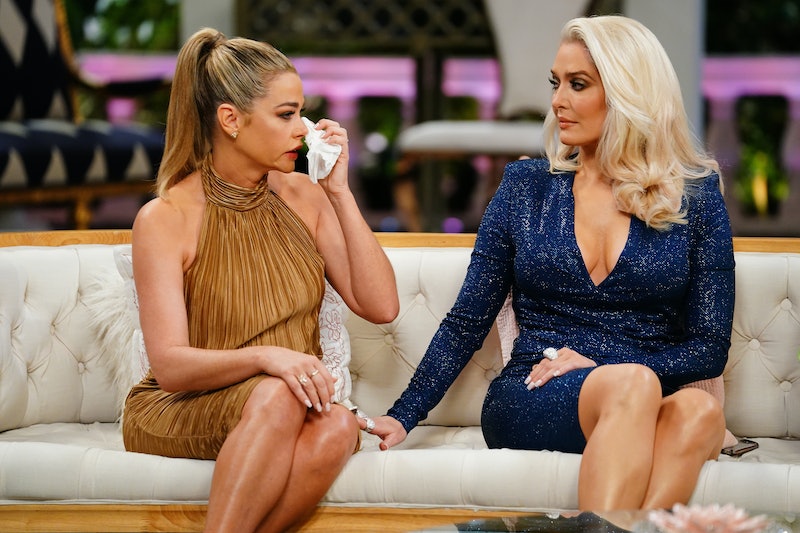 Her very first Housewife tagline revealed that her real life is "so much juicier" than what's reported in the tabloids, and Denise Richards' drama with Brandi Glanville on RHOBH is no exception. In January, the Daily Mail reported via multiple production sources that Denise and Brandi had an affair that lasted several months, and a fellow RHOBH cast member dropped the bomb during a cast trip to Rome in late November. For her part, Denise has repeatedly denied the affair since reports continued to appear in various outlets.

Bravo's cameras were rolling, of course, and Denise reportedly "walked away from the show" after one of her costars confronted her about the extramarital relationship. The Daily Mail claimed that Denise told Brandi she and husband Aaron Phypers (whom she married in a RHOBH Season 9 episode) were in an open marriage, and the women began seeing each other romantically in early 2019.

According to the UK newspaper, however, Denise and Aaron were not actually in an open marriage, and Brandi was "upset" her friend lied to her. In a February Instagram comment, Denise wrote that she's "100% monogamous" to her husband.

Seemingly confirming the reports, Brandi, who appeared as a full-time RHOBH cast member for three seasons until 2015, tweeted in December, "I just got "Denised."" Brandi fired off several more tweets the same day. "Seriously b*tch???? You wanna play," she wrote on Dec. 29. "1-blackmail is illegal 2-I have no skeletons in my closet (they're all on the internet) 3-slut shaming is soooooo last year."

Denise addressed media speculation in an interview with Entertainment Tonight in March. "The subject matter that seems to be in all the tabloids of late is... I don't know," she said. "I think it's kind of disgusting that they even talk about it. But that's something they choose to, and I've had worse things said, so you know, I can rise above it."

The RHOBH Season 10 trailer did show Denise walking away from the cameras in one scene, and in another, Aaron seemed to confront some of his wife's co-stars. Whatever happened behind the scenes, however, viewers can expect all the drama to play out on Season 10 of RHOBH. Before the episodes began airing, several of the cast — which also includes Kyle Richards, Lisa Rinna, Erika Girardi, Dorit Kemsley, Teddi Mellencamp Arroyave, and Garcelle Beauvais — teased what will go down on the Bravo reality series.

"There's two sides to every story," Erika explained to E! News. "Both of them will be told, and it's ultimately up to the viewer to decide who or which person they believe." She claimed that the only reason she got brought into the fray was because "Brandi told us that Denise had been saying things about us as well" and that was her "only dog in the fight."

Kyle added to E! that all of the women are there "to have an opinion" and because they're together all the time, it's difficult to stay out of the drama. "After being here for 10 years, there's been many things that I wish that they hadn't shown or that I hadn't said or done, but you know, I've never walked off," she told the outlet, referencing Denise stepping away from filming.

Garcelle is right that Brandi has never been known for holding back, and it seems that what happens between her and Denise will very much be this season's "Puppygate." Stay tuned.