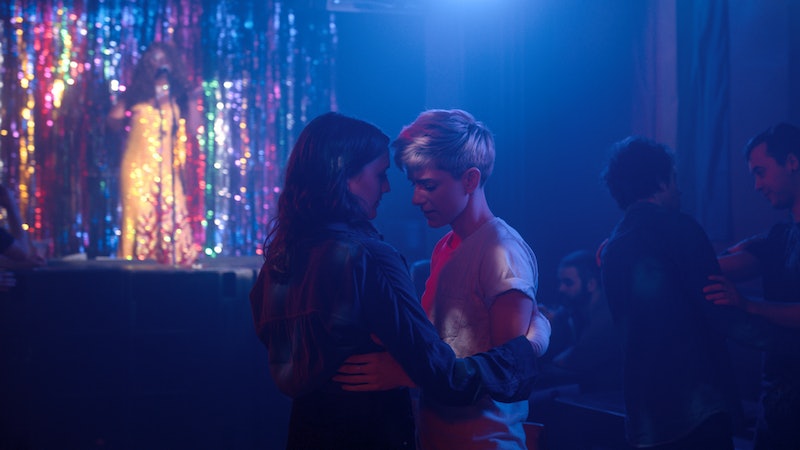 Update: Netflix confirmed in a press release on Dec. 7 that Feel Good will return for a second and final season. According to the logline, the second season will continue to follow Mae and George’s complicated love story as "Mae struggles to come to terms with the ghosts from her past and George tries to reinvent her present." It's slated to premiere in 2021.

"I'm beyond excited to be able to return to the world of Feel Good, and to see Mae and George's love story through to the dramatic conclusion we had always planned," star and creator Mae Martin said in the release. "I'm really deeply attached to this story and I'm so grateful to be getting back to work with the incredible team at Objective Fiction and our hilarious cast. Having spent most of 2020 speaking only to my kettle and my television as I watched the world burn on the internet, I'm euphoric to be around other human beings again. Seeing Joe Hampson’s and my dumb jokes come to life is heaven. Thank you, Netflix!”

Earlier: Though Netflix's Feel Good humorously covers everything from drug misuse to sexuality, it's at its core a tangled love story between Mae and George. And it's for that reason that co-creator and star Mae Martin wants Feel Good to return for Season 2: she wants to continue exploring the two's relationship.

Though the new, six-episode Netflix series has yet to be renewed, Martin told Now magazine that she would "love the opportunity to delve further into the question of whether these two people are actually good for each other, and whether they can transform an insane, toxic relationship into a long-term healthy one." Mae and George do ultimately end the season still together, but they have a number of hurdles to work through. Mae's struggle with substance misuse recovery will be a lifelong one (particularly considering she relapsed and hasn't yet told George about it). And while George did eventually (and accidentally) come out to her friends, it's clear that she's not yet fully comfortable being in a relationship with someone of the same gender. "I think a lot of people have been in love with someone who isn't necessarily good for them, and I'd love to explore that more," Martin told Now.

The London-based comedian has also said in interviews that the character of Mae is a version her, but from 10 years ago. So in the grand scheme of things, she has about a decade of life story left to cover, which could take many seasons to come.

Ultimately, whether or not Feel Good comes back will, as always, depend on the Netflix powers that be. But the show has a 100 percent critical rating on Rotten Tomatoes, which bodes well for its future. In the meantime, you can watch Martin's stand-up or read her book to tide you over.

More like this
Here’s Why Danny Masterson’s Hyde Isn’t In 'That '90s Show'
By Brad Witter
The 'Freeridge' Cast Shared Their Hopes For A Potential Season 2
By Grace Wehniainen
Netflix Shut Down 'Bridgerton' S3 Rumours About A “Very Dark” Storyline
By Bustle
Everything To Know About 'Cobra Kai' Season 6
By Brad Witter
Get Even More From Bustle — Sign Up For The Newsletter
From hair trends to relationship advice, our daily newsletter has everything you need to sound like a person who’s on TikTok, even if you aren’t.