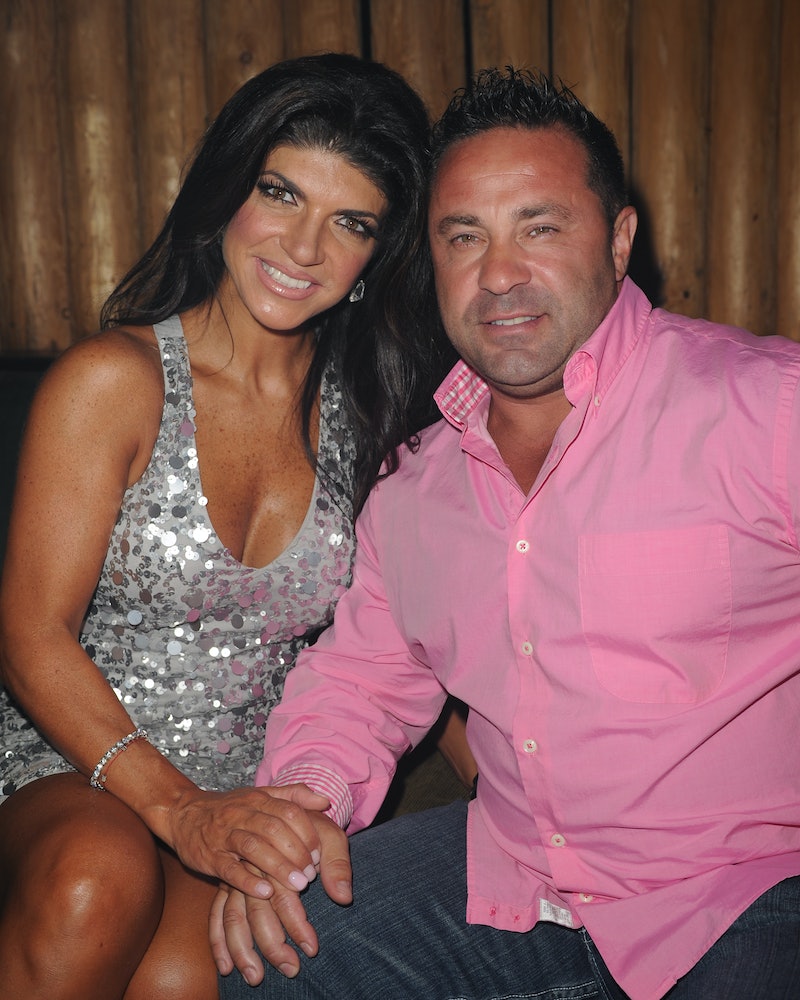 Though it seems likely that Joe Giudice won't appear on RHONJ Season 11, he'll still be very much part of the drama. In fact, it seems like he'll be the cause of one of Teresa's biggest fights with her brother and sister-in-law Joe and Melissa Gorga. The RHONJ Season 11 trailer shows the Gorgas in a heated screaming match with Teresa because she stood up for her ex-husband.

"How dare [he] say he's got dirt on me?" Joe Gorga fumes in one scene, while a cryptic headline stating that Giudice claims to "know things" about his "lying" ex-brother-in-law flashes on-screen. Later, Gorga bangs his fist on a table, incensed that Teresa was defending "that piece of sh*t" who put his "mother in a f*cking grave."

The headline shown in the preview is from a July 2020 interview with Celeb Magazine, in which Giudice took issue with comments Gorga had made about his marriage during a Watch What Happens Live appearance. "Who will get the last laugh as [the] truth continues to come out or should more truths come out? The truth hurts, right, Joe?" Giudice warned. "I know certain people don’t like to hear it and don't forget I know things too."

Teresa assumedly backed Giudice up, leading to her blowout with the Gorgas. "He's a great father for my daughters, he'll always be in my life and he did the right thing by our divorce," she explained to E! News of the decision. "Listen, he didn't mean for what happened to me, he didn't want any of that to happen. And look, I'm sure the poor guy didn't want to get deported. It is what it is, you know?"

If Giudice does appear on RHONJ, it will likely be virtually. After serving more than three years in prison on charges of bankruptcy fraud and conspiracy to commit wire and mail fraud, Giudice was deported to Italy, where he was born, in 2019. Teresa went to visit Joe with their four daughters in the RHONJ Season 10 finale, but the couple later announced their separation after 20 years of marriage. They finalized their divorce in September 2020.

Teresa and her daughters then flew to Italy again in November to meet Giudice's new girlfriend, Daniela Fittipaldi. But viewers will have to tune in to see if Bravo cameras were along for the trip.

More like this
Everything To Know About 'RHONY' Season 14
By Jake Viswanath, Alyssa Lapid and Brad Witter
RHOP’s Robyn Dixon Explained Why Juan Paid For Another Woman's Hotel Room
By Brad Witter
Erika Jayne's Estranged Husband Tom Girardi Has Been Indicted On Fraud Charges
By Jake Viswanath
'RHOSLC’s Heather & Whitney Are Still On A “Friendship Break” After Season 3 Reunion
By Jake Viswanath
Get Even More From Bustle — Sign Up For The Newsletter
From hair trends to relationship advice, our daily newsletter has everything you need to sound like a person who’s on TikTok, even if you aren’t.