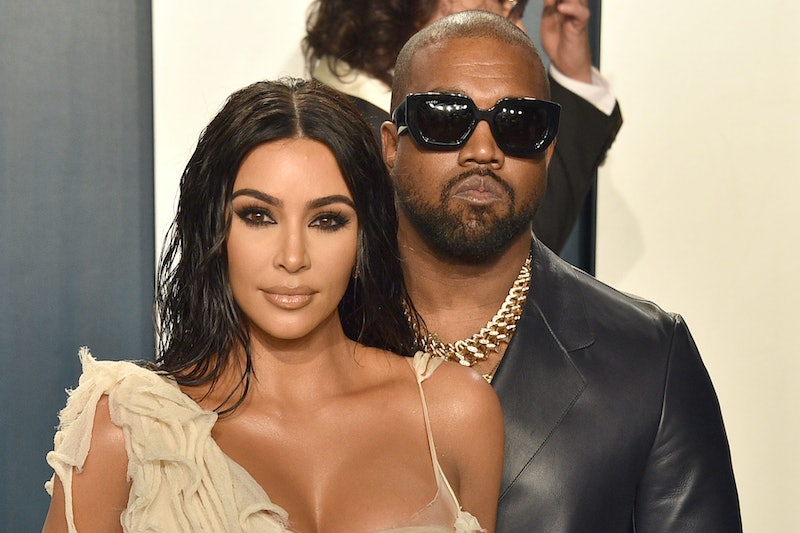 Since appearing in his first confessional on Season 16, Kanye West has become a more regular — if elusive — presence on Keeping Up with the Kardashians. He kind of comes and goes as he pleases, and is typically shot in the background of a family dinner or event. Which is why it's unclear if Kanye will be on KUWTK Season 19.

In the trailer for the season, which taped during the beginning of quarantine, Kim attends Kanye's March fashion show in Paris. According to Us Weekly, Kim was also reportedly seen filming in July amid Kanye's controversial presidential run, during which he posted several concerning tweets that prompted wide speculation about his mental health. However, an insider claimed to Us Weekly that Kim doesn't want that to be a storyline on the show. TMZ reported similar information — that the family was filming, but none of it pertained to Kanye.

In late July, Kim released a statement about Kanye on her Instagram Stories, and that will likely remain her only statement if she doesn't address the situation on KUWTK.

"As many of you know, Kanye has bi-polar disorder ... I've never spoken publicly about how this has affected us at home because I am very protective of our children and Kanye's right to privacy when it comes to his health. But today, I feel like I should comment on it because [of] the stigma and misconceptions about mental health ... He is a brilliant but complicated person ... Those who are close with Kanye know his heart and understand his words some times do not align with his intentions."

If Kanye isn't in many of the remaining KUWTK episodes, it wouldn't be that out of character. Kim told The Hollywood Reporter in 2017 that her husband "doesn't like to film everything. It's not his show," adding that she'd never discuss their personal life. "I won't really ever talk about something that's going on with Kanye," she said, explaining that Kanye's level of involvement is ultimately up to him. "He'll really surprise you though. He'll be like, 'I'm not filming' and then randomly show up."

Perhaps the same will be true in Season 19.