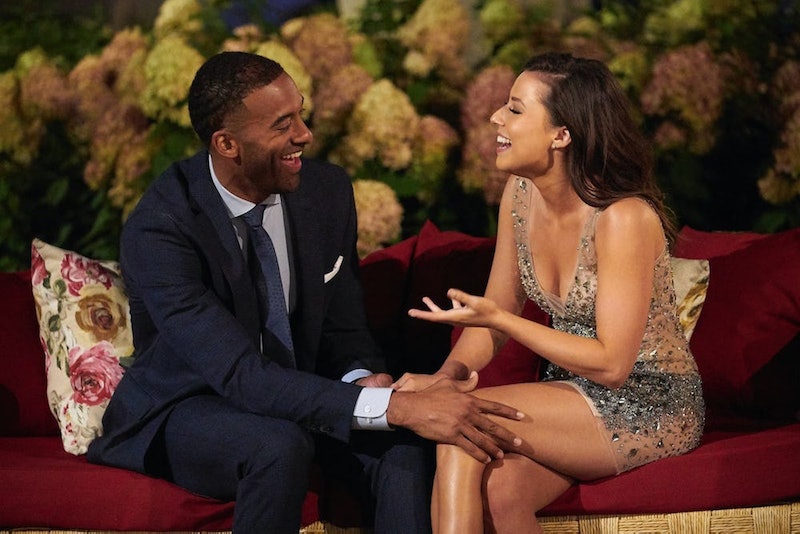 All of Bachelor Nation was shook by Blake Moynes’ arrival last week, but nothing is shocking Bachelorette fans more than the dramatic preview that aired on June 5. The trailer, which played after Monday night’s episode, teased what fans can expect from the rest of the season: makeout sessions with Blake, a tandem bike ride with Greg, a carriage ride with Justin and so much more. At one point, Katie even appears to tell Mike P. that she loves him. Unfortunately, the drama in the teaser far outweighs the romantic moments, and if we didn’t know any better, we would think it was a trailer for Game of Thrones.

The remaining two minutes of the teaser are full of suspense and action. There are emotional goodbyes, a heartbreaking facetime call between Michael A. and his son, and a ton of tension between Katie and Greg that could change everything. “I am done. I am done,” the Season 17 star says as she storms off. “Someone book my flight home.” The most mysterious moment of the trailer, however, comes when a mystery man knocks on Katie’s door. “The last thing I ever expected was you,” she said. Unfortunately, the footage was too close up to identify the man with 100 percent certainty, but that didn’t stop Bachelorette fans from trying.

“This is totally Matt James in the trailer coming to give a pep talk,” Twitter user @tamladies wrote alongside two screenshots from the teaser. “No other human person is this tall.” And while the former Bachelor may show up to give Katie some advice, another fan on social media noticed something sketchy about the images. “Wait these are two different people, look at the shirts!” @layneegirl53 responded, adding that one of the men knocking might be Michael. “I bet he leaves after what his son said,” she added.

Some fans aren’t convinced that James makes an appearance on Katie’s season at all. “Do you think that’s Matt? Because I remember him having a bushy beard and I just don’t know if he cleans up just for Katie for a pep talk,” someone else tweeted. Another fan thought that it might be Thomas, but others couldn’t even venture to guess. Instead, one person made light of the mysterious knock by harkening back to a moment from a previous episode when Katie was shocked to see Tayshia Adams, even though she’s one of this season’s hosts. “The last thing Katie EVER expected to see just showed up on the preview?!” Twitter user @jozjenkz wrote. “Is it Tayshia again???!??!”

Fans will have to keep watching to get the answers they’re desperately waiting for, but the two-and-a-half-minute trailer still gave viewers a lot to look forward to. “I’m not in love right now,” Blake admits to Katie at one point. Later on, he appears to tell a family member about his struggle to drop the L-word, meaning that he probably gets a hometown date. A few of the other remaining men also seem to have their doubts. “I’m just really nervous,” Andrew S. says in the clip. “I don’t know if I could do this,” Justin warns in a confessional.

Unfortunately, the contestants aren’t the only ones seemingly losing faith in the process. “How am I supposed to move forward with any of this?” Katie asks co-host Kaitlyn Bristowe, later adding through tears that she feels like she’s at her “breaking point.” The trailer closes with steamy makeout sessions, emotional sendoffs, a ton of crying, and a strong statement from the Bachelorette herself: “I’m truly here to find love, and if I walk away without that then it was all for nothing.”