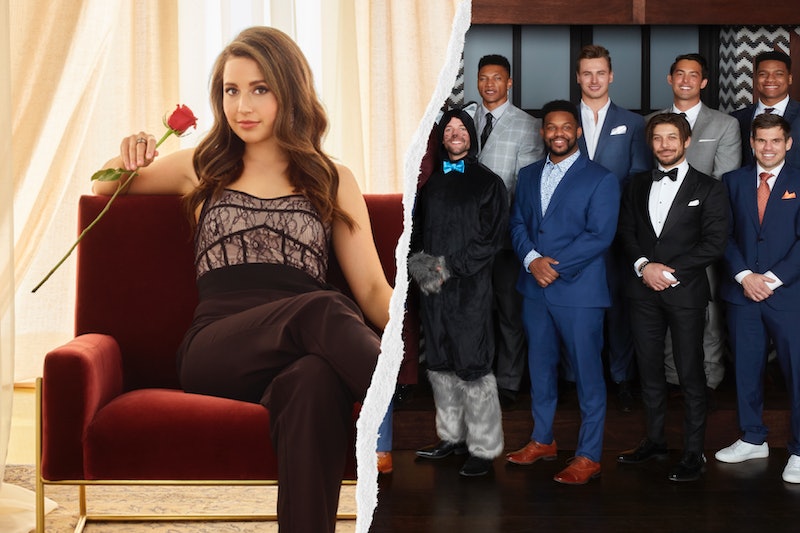 The founder behind Instagram account @BachelorData — mononymous number cruncher Suzana — started compiling “fun data” about The Bachelor franchise years ago during her college days to improve her spreadsheet skills. She knew analyzing her favorite show was a better plan than taking a boring Excel class. Back then, she simply tracked the Instagram follower growth of contestants after each episode, sharing her findings on Reddit via a Bachelor subreddit. Nowadays, she’s digging deeper into the statistics, finding trends, and even leveraging her data to predict who might win Season 17 of The Bachelorette.

Suzana tells Bustle that screen-time analysis can help pinpoint who will likely make it into Katie Thurston’s final four by the end of the season. Her data from Katie’s season premiere as well as data from recent seasons also delves into the show’s diversity issues. As we all know, ABC’s The Bachelor has faced a recent racial reckoning. After 25 seasons and nearly two decades on air, the dating reality series finally introduced fans to the first Black lead of The Bachelor: in Matt James during a time when the country was in the middle of protests against racial injustice, and when the fans and former contestants who make up Bachelor Nation were pushing for more diversity in reaction to the show’s historically very white casting. So when producers brought in James, not to mention a record-breaking 25 women of color to compete for the final rose, it felt like change was finally happening — that is until you looked at the numbers.

As Suzana looked at the numbers for James’ season, such as screen time in comparison to casting, it became clear that although it was the most diverse cast, that wasn’t reflected in whose stories or even faces made it onto the screen the most. Now, with host Chris Harrison officially ousted after a controversial interview with former Bachelorette Rachel Lindsay, where he defended Bachelor contestant Rachel Kirkconnell’s racist past, the numbers behind the show’s attempts at diversifying and rectifying past structural issues, are more important than ever.

Let’s dive into the data.

What’s your impression of this season’s premiere in comparison to previous Bachelorette seasons?

Every Bachelorette premiere is unique in its own way, especially based on who the storyline is. What I found interesting this season is how little time was spent on Katie. If you look at the overall segment analysis, so much of the time was spent on limo exits, cocktail parties, and intro packages for the men. We had more intro packages this season than any previous Bachelorette premiere. I feel like I know more about the men after the first episode than I have in any other premiere.

Looking at premiere night, I know Greg Grippo and Andrew Spencer got the most screen time. What assumptions can we make about the final four based on that data?

With screen time, there is a very simple data assumption you can make, and it’s that if they’re not getting a lot of screen time, there’s a pretty good chance they’re not relevant for the season. There’s a pretty good chance Greg’s going to be relevant this season, but Marty [Hargrove] who came in last, I think he was eliminated. Some people that you know are at the bottom of the chart we can assume they’re probably not going to be a big part of this season. ... You can definitely assume if you’re in the top 50% [of screen time] there’s a good chance you’re either going to be a major character or you’re going to be a minor character that makes it far but gets cut just before hometown [dates].

There’s also something we’re trying to analyze with screen time we still haven’t figured out. We’ve done tone analysis in the past and that one’s a little more a little bit more opinionated and less objective. Like, is this a positive segment, a negative, or neutral? But something we really noticed last night was with Andrew Spencer, he was second in screen time and we remember him, but a lot of his screen time was basically being the narrator. He’s not actually interacting with Katie, but we’re seeing him on the screen. What’s interesting is are we seeing them talk about their past, talk about the future they want with Katie, or are we just seeing them as a narrator or an instigator?

Do you think they were being intentional about making sure the men got more camera time as opposed to Katie since we know more about her?

What might have happened behind the scenes since there was a shakeup — now we have [co-hosts] Kaitlyn and Tayshia helping Katie through her journey — I think that may have forced them to rethink things they do every single episode. For the premiere, they put water on the driveway and Chris comes out to greet the bachelorette. Well, this time who was going to greet her? OK, they have to surprise her. So how are we going to format that storyline? Just a small tweak like a host, which isn’t the focus of the show, bringing in somebody new may have forced them to rethink some of their storylines. I think it will be refreshing for us viewers to see a new approach to this. ... I feel like Kaitlyn and Tayshia feel like Katie’s best friends, who are there to help her through it.

What other data points stood out or surprised you?

One that really stood out to me was looking at the types of limo entrances. I classify them as either traditional or gimmick. If it’s traditional, they just say, “Hi, my name’s Greg I’m excited to be here, see you inside.” Then, you know, the gimmicks are the ball pit in the back of the truck, the RV, you know, things like that. Typically with The Bachelor, when the male is the lead with a ton of women, there are way more gimmicks. That stayed true this season. Katie was actually 50% exactly traditional and then 50% gimmick. But when I was watching it, I thought she didn’t have very many gimmicks at all. I thought it was actually more traditional. And then when I actually took the data and then looked at it, it was on par with JoJo [Fletcher] and other previous bachelorettes.

Matt James’ season had one of the most diverse casts, but your data showed the women of color on his season got the least screen time. How does Katie’s season compare to Matt’s in terms of diversity?

Matt James, his season was definitely one of the most diverse — before that it was Rachel Lindsay which definitely feels like they cast it intentionally for the lead but also for current events that were going on. Katie’s season has definitely taken a step back from Matt James’, I’m honestly not surprised by it especially with her not being a person of color in the lead. I’m not saying that’s what I was advocating for, but it doesn’t surprise me. I’m also wondering too if there are things that are shaking up behind the scenes. Notoriously, leads have come out to say, we don’t really have a say in who’s casting. We just kind of say here are some of my preferences. I’m wondering how much more happened behind the scenes that we don’t know about this year.

Also, casting is just one step. It’s once you actually cast people, who are you showing? And it’s not necessarily people of color versus white people. Diversity has a bigger umbrella than that. Showing people with different cultures and different experiences than Katie. They definitely highlighted one right off the bat. I think his name was Mike [Planeta] he has a very different opinion than her on waiting for marriage for sex. They can highlight different storylines rather than the traditional storylines they’ve shown us for the last decade or two.

I’m not here to make ABC get rid of The Bachelor or The Bachelorette, it’s in hopes of improving it and showing us some more diverse people.

It’s more about being intentional about what are the storylines, but also understanding a lot of these one-on-one dates, it might be Katie that’s advocating to go on dates with certain people. I think that’s something interesting Matt James brought up at the beginning of his season was the pressure he felt to choose and be with a specific person because he was the first [Black] person in that role. I definitely don’t want to take free will out of the data because a big part of data is who’s the lead.

Chris Harrison won’t be returning to the franchise. What are your thoughts on that decision? And do you have any data about Harrison?

There’s a lot of emotion behind it given the last five, six years of what’s happened in the United States and everything that’s [still] happening. I think a lot of people are struggling with him leaving and they’re saying I'm not going to watch anymore, which I find that argument interesting. If you looked at Matt’s season, Season 25 of The Bachelor, out of all of the people’s screen time, so take out commercials, previews, all that jazz, just the actual episode, Chris Harrison only made up 5.4% of all the screen time for the entire season. He wasn’t at After the Final Rose, so it did cut into some of his screen time. He’s been there since the beginning so a lot of people want to support him, but I do think a lot of it comes from a political background of people wanting to be “anti woke.” This is going to be a point in the franchise they need to figure out what to do now. How are they going to refresh this? How are they going to spin it?

Do you think people watching the show are getting more critical when it comes to things like screen time and diversity because of the data points you’re introducing?

Yeah. I think it’s hard not to once you have the data, right? When you have explicit data, it’s, it’s easy to point to things. It’s also easy to find trends that aren’t actually there. So I think that’s the moral obligation of data visualization is to be careful with what data you’re showing. Some weeks I don’t show race representation because [during] hometown dates with so many new people being in the mix, it can skew things in certain directions that don’t actually really show what the true storylines were. People are getting more critical, but they’re also getting critical at funny things like how women are much better at choosing the first impression rose instead of the men. I think it’s adding to the conversation and actually having something to have some foundation, whenever you’re talking with maybe a family member that doesn’t think race is a problem. You’re like when two-thirds of the cast is not white, but over two-thirds of the screen time went toward white people there’s a problem there. I think it’s tough, and it can be critical [but] I’m not here to make ABC get rid of The Bachelor or The Bachelorette, it’s in hopes of improving it and showing us some more diverse people.