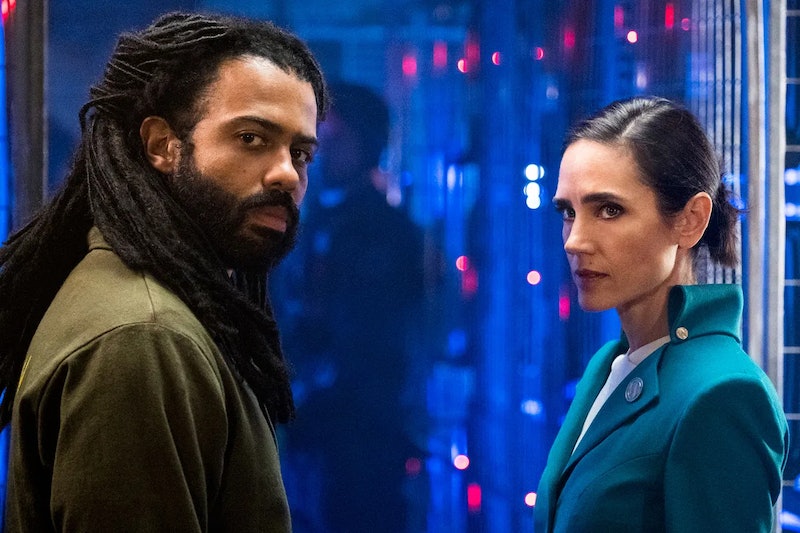 Snowpiercer's journey from the big screen to television a fraught one. The Bong Joon-ho directed film turned TV series spent over three years in development limbo, during which it switched networks from TNT to TBS and back at the last minute. But the series finally had its debut this May. And now, with the first season having just wrapped, Snowpiercer Season 2 has already been green-lit. But when exactly will fans get more Snowpiercer?

At a WarnerMedia meeting to preview the upcoming year for investors and advertisers back in May 2019, it was announced that the series was confirmed for a second season. They also shared that the yet-to-be-aired Season 1 guest star Rowan Blanchard, who played mysterious teen Alexandra, would be officially upgraded to series regular for Season 2.

Production began on the new season in fall 2019, with Game of Thrones alum Sean Bean cast as a then-unknown series regular, later revealed to be the train's enigmatic creator Mr. Wilford. Bean as Wilford makes a brief appearance in Season 1, with his role apparently expanded in the upcoming season (no spoilers, but that also means a lot more flashbacks for Season 2).

But those wondering whether the second season will suffer coronavirus related delays like so many other series face can rest a little bit easy. Annalise Basso, who plays isolated and devious daughter of privilege "LJ" Folger Jr., told Radio Times, "We were just finishing Season 2 when everything got shut down because of the pandemic." Basso also confirmed the show's mostly staying aboard the Snowpiercer for Season 2 as well. "I hope one day we'll be able to take viewers off of the train, and I don't know if that will happen and what the budget for that would be like, but maybe we could go to Iceland or Greenland or somewhere like that to film the exterior shots, who knows!"

Current showrunner Graeme Manson hints that Season 2 will shake things up between passengers. "When we got into Season 2, we were like, “Well, we’ve never put these two characters together,'" he told Collider. "I love that kind of exercise for the writers’ room, and the writers love that, too. It’s fun to put two opposites together and see what you can find with them." As for the theoretical future of the show, Manson went on to say that though there's no confirmation of a third season yet, the only element of it that would change pending renewal is whether this season's finale would be a cliffhanger or a resolution. "There are as many Snowpiercer stories as there are trains that you can imagine... With this cast, let’s hope that we’re looking at five or six seasons."

More like this
Netflix Shut Down 'Bridgerton' S3 Rumours About A “Very Dark” Storyline
By Bustle
This 'Gossip Girl' Wardrobe Error Has Gone Viral On TikTok
By Alyssa Lapid
'The Last Of Us' Has Officially Been Renewed For Season 2
By Darshita Goyal
Rupert Grint Just Shared A *Major* Update About Ron Weasley’s Future
By El Hunt
Get Even More From Bustle — Sign Up For The Newsletter
From hair trends to relationship advice, our daily newsletter has everything you need to sound like a person who’s on TikTok, even if you aren’t.