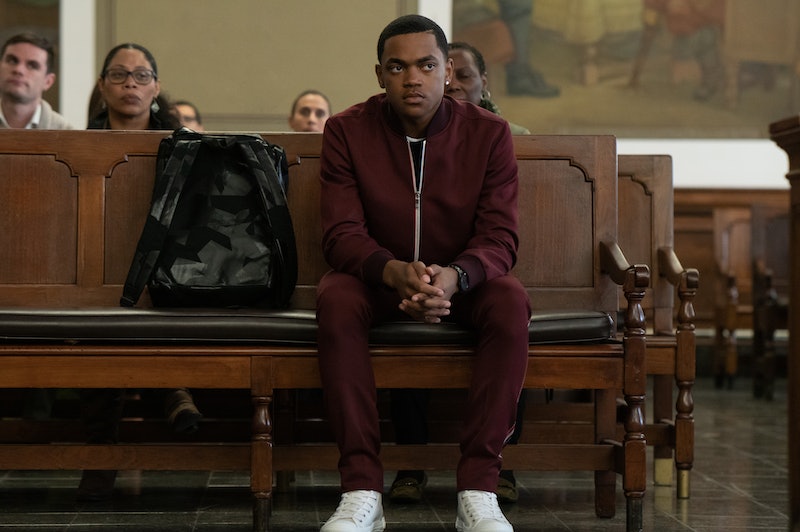 Spoilers ahead for the Power Book II fall finale. Power fans were rightfully shocked to learn that Tariq (Michael Rainey Jr.) fired the fatal bullet that killed his father James "Ghost" St Patrick in the original Starz series. Tariq's mom Tasha (Naturi Naughton) ultimately took the fall for the murder, but there's only so much she can do to cover her son's tracks. And by the end of Power spinoff Power Book II's first season fall finale, the question of whether Tariq will get caught is looming larger than ever.

In order to help Tasha prepare for her defense, Tariq took a page from his late father's playbook and used every hustle he could to land high-powered New York attorney Davis MacLean (Clifford "Method Man" Smith) to represent her case. What Tariq should have learned from Ghost, though, is to trust nobody — including Davis.

In the previous episode, Professor Milgram (Melanie Liburd) offered a cryptic warning that "a win for Davis doesn't always equal a win for his clients." And she was mostly right. The Oct. 4 episode's final moments make clear that Davis is out for himself and himself only, even if Tariq is keeping his pockets lined with Tasha's legal fees.

Thanks to Saxe (Shane Johnson), now a U.S. Attorney, getting his hands on a secretly-recorded graveside video of Tariq admitting to killing Ghost, he and Davis both had some leverage against the other. But what Saxe saw as an impasse, Davis saw as on opportunity. Pinning the murder on Tariq — despite the fact that he just turned 18 and being tried as an adult means he "might get the needle" — means they'll both come out on top. "He's not my client, I don't care," Davis told Saxe. "When Tasha's acquitted, I'm in the win column."

Power Book fans shouldn't necessarily count Tariq out just yet, though. "Tariq is a lot smarter than people think he is. He kind of has the Ghost mentality," Rainey Jr. told Digital Spy in August. "I feel like it's just in his blood, so he doesn't even notice that he's moving how he's moving, that he's just got to do what you got to do. It's in him already, so it's kind of an inevitable thing."

We'll see if he can get himself out of this one when Power Book II returns.