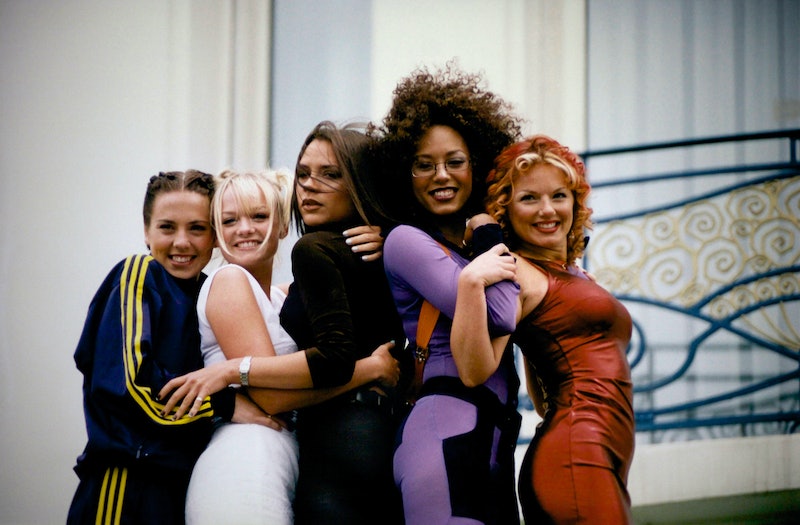 Glastonbury has been yet another event to fall victim to cancellation for the second time amid ongoing coronavirus restrictions. With the iconic festival’s 50th anniversary event, which had confirmed big-name headliners such as Taylor Swift, Diana Ross and Paul McCartney, also cancelled in 2020, all eyes are looking ahead to next year’s festival which could well be the biggest and best Glastonbury yet. But could a legendary British girl band be among them, will the Spice Girls *actually* play Glastonbury?

Rumours of the Spice Girls returning to the stage once again to perform at Glastonbury have been circulating for years. In 2019, “Baby Spice” Emma Bunton added fuel to the flames on Radio 2's The Zoe Ball Breakfast Show, confirming that the band had been asked by Glastonbury organisers, but were waiting to see how the reunion tour went first. “We have been asked — we're going to see how this tour goes first!” she revealed.

Last year, bookies had 2-1 odds on the Spice Girls playing the legends’ slot at Glastonbury this June, also the same month as the 25th anniversary of “Wannabe”, according to The Sun, and just back in January 2021 Melanie “Scary Spice” Brown kept fans on tenterhooks during an interview on BBC Radio 5 Live. During the interview with host Nihal Arthanayake, Mel B revealed: “We [The Spice Girls] have got things in the pipeline because it's going to be our 25th anniversary this year, so it's a big one.”

But now, Sporty Spice Melanie Chisholm has properly responded to the rumours, revealing that the Spice Girls have “never” been asked to perform at the Worthy Farm festival. Boo. “I can tell you the absolute truth on this one – we’ve never been approached!” Mel C revealed on the Celebrity Search Engine podcast. “I would love to play Glastonbury, in fact all the girls would. But yeah, haven’t yet had that call.”

So there you have it. No signs of the Spice Girls playing Glastonbury anytime soon, sadly. Maybe festival organiser Emily Eavis should take note of the bookies predictions and get the girls in for some discussions ASAP.

Although Glasto might not be on the horizon, Mel C did share some good news on the girlband touring again. “I can’t speak for everybody but if it was down to me, as soon as we can, we will,” she told podcast host Abbie McCarthy. “The success of the shows in 2019 and just how much we loved it, we have to do it. If we don’t do it, I’ll be very, very cross!

More like this
Lewis Capaldi Is “Really Sorry” After Pre-Sale Ticket Fiasco Guts Fans
By El Hunt
The Spice Girls Are Set To Reunite At King Charles III’s Coronation
By Sam Ramsden
8 Easter Eggs From Taylor Swift's “Lavender Haze” Music Video
By Shahed Ezaydi
This 'Emily In Paris' x Blackpink Crossover Is Beyond Iconic
By El Hunt
Get The Very Best Of Bustle/UK
Sign up for Bustle UK's twice-weekly newsletter, featuring the latest must-watch TV, moving personal stories, and expert advice on the hottest viral buys.