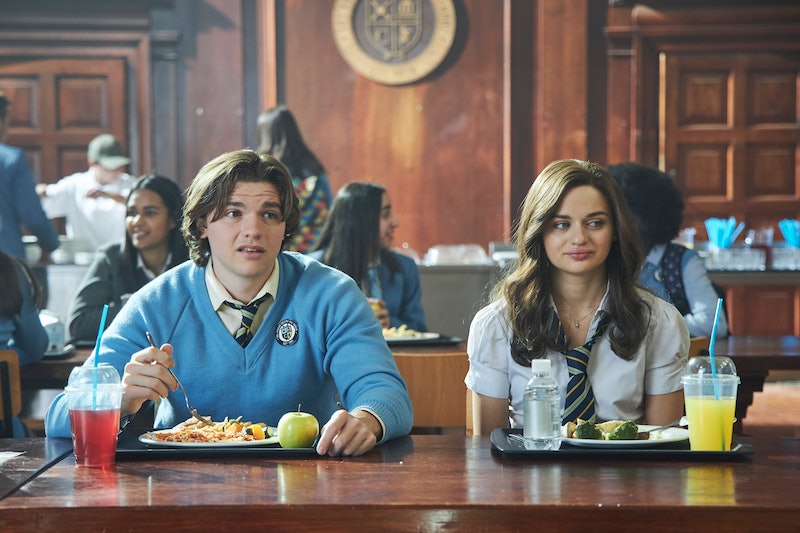 Update: Netflix announced on July 26 that The Kissing Booth will return for a third movie.

Earlier: The Kissing Booth 2 Netflix's sequel to the popular 2018 romantic comedy The Kissing Booth, is now streaming on Netflix and brings back even more awkward memories of high school relationships. The story of Elle (Joey King), her best friend Lee (Joel Courtney), and her relationship with his older brother Noah (Jacob Elordi) is one that truly resonates with fans. But much like the first movie, the sequel ends on a pretty ambiguous note, leaving fans wondering: Will there be a Kissing Booth 3?

Spoilers ahead for The Kissing Booth 2. The Kissing Booth 2 kicks off right where The Kissing Booth left off. Noah and Elle solidify their relationship and spend the summer together before Noah heads off to college at Harvard. Elle stays back in Los Angeles to finish up her senior year of high school, where she's lonely and clings to Lee, her BFF. But when the subject of college applications comes up, Noah urges Elle to apply somewhere in Boston so that the two could be together. But Elle and Lee had always promised each other that they would go to UC Berkeley together, the college where their moms met and became best friends.

Adding to the tension is the arrival of newcomer Marco (Taylor Zakhar Perez), who joins Elle for a Dance Dance Mania competition after Lee has to back out due to an ankle injury. Elle's flirtation with the new guy, combined with Noah's long-distance secrets put Elle and Noah's relationship in jeopardy.

While there are only two books so far in Beth Reekles Kissing Booth series, that doesn't mean that there isn't room for a third book or a third film. In fact, the second film ends on a cliffhanger, leaving plenty of room for another movie. Here's how it goes down: Elle gets accepted to both UC Berkeley and Harvard yet tells Noah and Lee that she's been waitlisted at both. The movie ends with her unsure of where to choose, and whose heart to break.

Additionally, it seems at the end of the movie that Marco is still totally into Elle, even though she put a stop to their intense flirtation and single kiss after getting back together with Noah. But when one of Marco's bros urges him to get over Elle because "she's not worth it," Marco mutters under his breath that she is. This leaves the door totally open to the idea of Marco continuing to pursue Elle.

While there hasn't been any official confirmation of a third film, King is on board with the idea. As she told The Today Show, "Me and the cast have been talking and we want that so bad and we’re kind of relying on the fans to help us out. They loved the first one so much and they’re the reason that we got a sequel. So if they love this one and they make it known to the world and to Netflix, our fingers are crossed that Netflix will give us a third movie because that’s what we want really badly,"

So if you want to see more Elle, Lee, Noah, take King's advice and cue up The Kissing Booth 2.

More like this
What’s New On Netflix: 'Never Have I Ever' & 'Indian Matchmaking' Return
By Arya Roshanian
What’s New On Netflix: 'Bridget Jones’s Diary' & 'Monster-in-Law'
By Arya Roshanian
Here’s Everything Coming To & Leaving Netflix In August
By Jake Viswanath
Everything To Know About Netflix's Marilyn Monroe Movie 'Blonde' Starring Ana De Armas
By Grace Wehniainen
Get Even More From Bustle — Sign Up For The Newsletter

This article was originally published on July 24, 2020