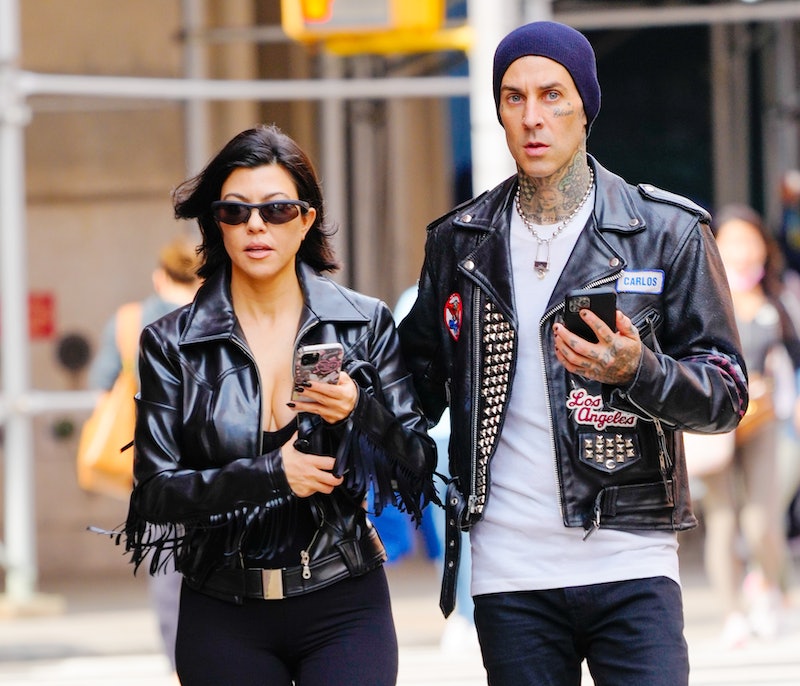 In December 2020, Keeping Up With the Kardashian fans the world over let out a sigh of relief when the news broke that once the iconic reality show ends, they’ll still be able to keep up with their favorite reality TV stars on the small screen. Now, fans are learning even more about the upcoming Hulu series, and it seems like Kourtney Kardashian’s rockstar fiancé Travis Barker will more than likely be making an appearance.

On Wednesday, Jan. 19, the Poosh founder teased the upcoming series on her Instagram Stories by sharing a photo of one of the episodes playing on her laptop. She was careful not to give too much away, but the image does show footsteps in the sand, which could mean that fans will get a closer look at her engagement to the Blink-182 drummer. The image also shows a big black boot, which definitely looks like it belongs to Barker.

If the couple’s engagement does air on Hulu, it wouldn’t come as much of a surprise. Last June, a source told Entertainment Tonight that “Travis is expected to make an appearance” on the Hulu show. “His kids may appear as well, but not as much as he will be featured,” the insider continued. They also added that “Travis and Kourtney are doing great” and that Barker “just wants to keep her happy.”

This report wasn’t shocking to fans who’ve been watching the pair since they officially announced their relationship in February 2021. The two have shared everything from joint family vacations to permanent declarations of love to immense amounts of PDA on social media, so viewers have a lot to look forward to. Hopefully, that includes the moment the musician proposed to the reality star inside a heart of red and white roses on the beach.

Kardashian was the first to reveal the engagement with a photo on Instagram, which she captioned, “forever @travisbarker. According to E!, she had no idea Barker was going to pop the question and she couldn’t stop telling him she loved him. “I could see Kourtney smiling from ear to ear and put her hand over her mouth looking surprised,” a source revealed. “The family cheered for them and went back into the hotel.” The proposal reportedly took place at the Rosewood Miramar Hotel in Montecito, California.

Although it seems like their engagement will air on the Hulu series, fans will have to wait to be sure. So far, a premiere date has not yet been announced, but during an Oct. 21 appearance on The Ellen DeGeneres Show, Khloé Kardashian hinted that the show will most likely premiere around the “end of January, early February.” “That’s the beauty of Hulu,” she said. “We’re streaming so we get to have a much quicker turnaround than previously. We’re really excited.”

On Dec. 31, 2021, the famous family unveiled an official New Year’s Eve-themed teaser for the series and shared its title: The Kardashians. “When the countdown to the new year ends,” the teaser says, “the countdown to the new show begins.” Unfortunately, the video didn’t provide an exact premiere date, but hopefully Khloé was right and the new series is just around the corner.

This article was originally published on June 6, 2021