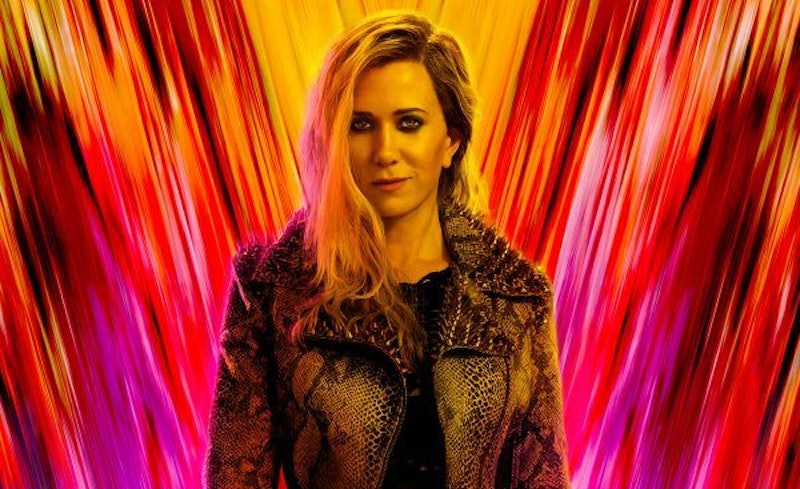 Throughout her career, Saturday Night Live alum Kristen Wiig has been known for her comedic prowess. From her SNL days to her blockbuster film Bridesmaids to her roles in indie dramedies like The Skeleton Twins, Wiig has never struggled to leave audiences laughing. But with her starring role in the new Wonder Woman sequel, the actor is showing a brand new side of her: action star. Kristen Wiig's Wonder Woman 1984 character is a far cry from anything the actor has done before, but she was definitely up to the task.

"I didn’t want her to be the Kristen people have seen," Wiig said of her character in an interview with co-star Gal Gadot for Harper's Bazaar. "I thought, she’s not funny, she’s sad. One day Patty [Jenkins, director] said to me, ‘If you just let yourself go, and just be this person and see if the awkward funny giggly stuff comes out, you’ll feel better.’ Then it clicked." Wiig also revealed that the physical aspects of the role were the most challenging part of shooting the film, and that's no surprise considering her character's identity. Wiig portrays Cheetah, a DC Comics villain with a long and storied history.

Cheetah is one of Wonder Woman's oldest nemeses, with the original version of the character being nearly as old as the superhero herself. There have been a total of four different Cheetahs in DC Comics history, with the first debuting way back in 1943 in Wonder Woman #6. The version played by Wiig in Wonder Woman 1984 is the third Cheetah, Barbara Minerva, and she is by far the most well-known. The character made her first appearance in Wonder Woman Vol. 2 #7 in 1987, which was the same year that fellow Wonder Woman 1984 villain Maxwell Lord debuted. Unlike the previous two Cheetahs, who were non-superpowered socialites in cheetah costumes, Minerva was a metahuman who could go toe-to-toe with Wonder Woman in battle thanks to her predator-like powers.

In the comics, Minerva is a wealthy archaeologist who is always seeking glory. During an expedition in Africa to locate a legendary tribe that's protected by a supernatural cheetah-powered guardian, Minerva ends up becoming the guardian herself, gaining cat-like abilities and looks. The superpowered Minerva eventually sets Wonder Woman in her sights, wishing to prove her worth by defeating the Amazonian hero. The film's version of Minerva is a bit different, but she still comes from a similar place. Wiig's Minerva is presented as a shy coworker of Diana Prince who wishes to become like her. These wishes end up manifesting in some twisted ways thanks to a mystical artifact belonging to Lord.

As one of Wonder Woman's oldest and most vicious villains, it's no surprise that Cheetah is making her movie debut in Wonder Woman 1984. It is somewhat surprising that she's being played by comedy superstar Wiig, but once you see the SNL legend as a cat/human hybrid, you'll regret having ever doubted her. Especially since she's already being heralded, "the best thing in Wonder Woman 1984."