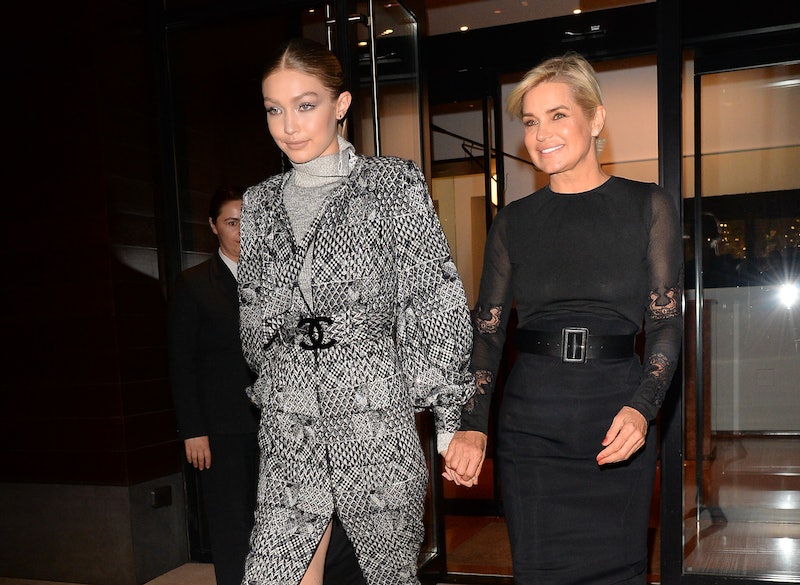 The Hadid family had an extra reason to be thankful this holiday season — and their matriarch made sure to celebrate her on social media. On Saturday, Nov. 28, Yolanda Hadid shared a rare photo of Gigi Hadid and her daughter on her Instagram stories, along with other highlights from the family's Thanksgiving gathering. As the model and boyfriend Zayn Malik have yet to publicly reveal their little one's name or face, Yolanda's photo showed her baby granddaughter from behind as Gigi cuddled her and kissed her on the cheek.

While she has been respectful of her daughter's reluctance to share too much about the new baby on social media, Yolanda has posted quite a bit about how happy she is to be a grandmother in the two months since her birth. "My heart is expending with so much love and joy for this little baby girl she is an angel sent to us from above....." the former Real Housewives of Beverly Hills star wrote on Instagram in October. "Thank you Mommy & Daddy for making me a Oma, I love every minute of it."

Yolanda wasn't the only one to celebrate her granddaughter's first Thanksgiving. On Nov. 26, Gigi shared a photo on Instagram of herself touching her cheek to the baby's head. Instead of captioning the picture, the model opted for a series of emojis, including a butterfly, a sun, and a fall leaf.

Gigi has clearly been enjoying celebrating the holidays with her daughter, as she revealed on Instagram on Nov. 24 that she had already decorated her home for Christmas in order to properly enjoy the season. "A whole new kind of busy & tired," the model wrote, alongside a photo of her and the baby bundled up for an outdoor walk at her family's farm in Pennsylvania. "But she’s da bestie so she got Christmas decorations early." In addition to sharing some rare photos from their outdoor adventure, Gigi also gave fans a glimpse at their decked-out living room and the Gameboy and margarita ornaments decorating her Christmas tree.

Since she first announced that she and Malik were expecting their first child in April, Gigi has slowly begun sharing more and more about her daughter and her life as a new mom with her fans. "I am so grateful for the positive comments and the questions and wanting to know that we're all good and safe. And everything's going great," Gigi told fans during an Instagram Live in July. "I love you all and I really appreciate your positive messages. I'm just taking my time with sharing my pregnancy and you guys will see it when you see it."

Appropriately, when the model announced on Sept. 23 that she had given birth to a baby girl, Gigi only shared a glimpse at their new addition in her emotional Instagram post. "Our girl joined us earth-side this weekend and she’s already changed our world," Gigi wrote alongside a black-and-white photo of her daughter's hand, adding that she was "so in love" with her already.

Malik, who shared a similar photo on Twitter, echoed those sentiments with his own announcement. "To try put into words how i am feeling right now would be an impossible task," he wrote. "The love i feel for this tiny human is beyond my understanding. Grateful to know her, proud to call her mine, & thankful for the life we will have together."

The new parents' main priority right now is just spending time with their baby girl, rather than keeping people updated on social media, a source told Entertainment Tonight in October. "The couple has completely thrown themselves into being hands-on parents and just had their first date night," the insider said. "Gigi and Zayn have enjoyed taking time off work to focus on their relationship and daughter. [They] are more in love now than ever before."

More like this
Gigi Hadid’s Dad Shared What He Knows About Those Leonardo DiCaprio Rumors
By Brad Witter
Confusion Reigns After Kanye Changes His Instagram Profile Pic To Kris Jenner
By Jake Viswanath
The Try Guys Cheating Scandal, Explained
By Grace Wehniainen
The Real Reason Russell Brand Decided To Quit YouTube
By Sam Ramsden
Get Even More From Bustle — Sign Up For The Newsletter