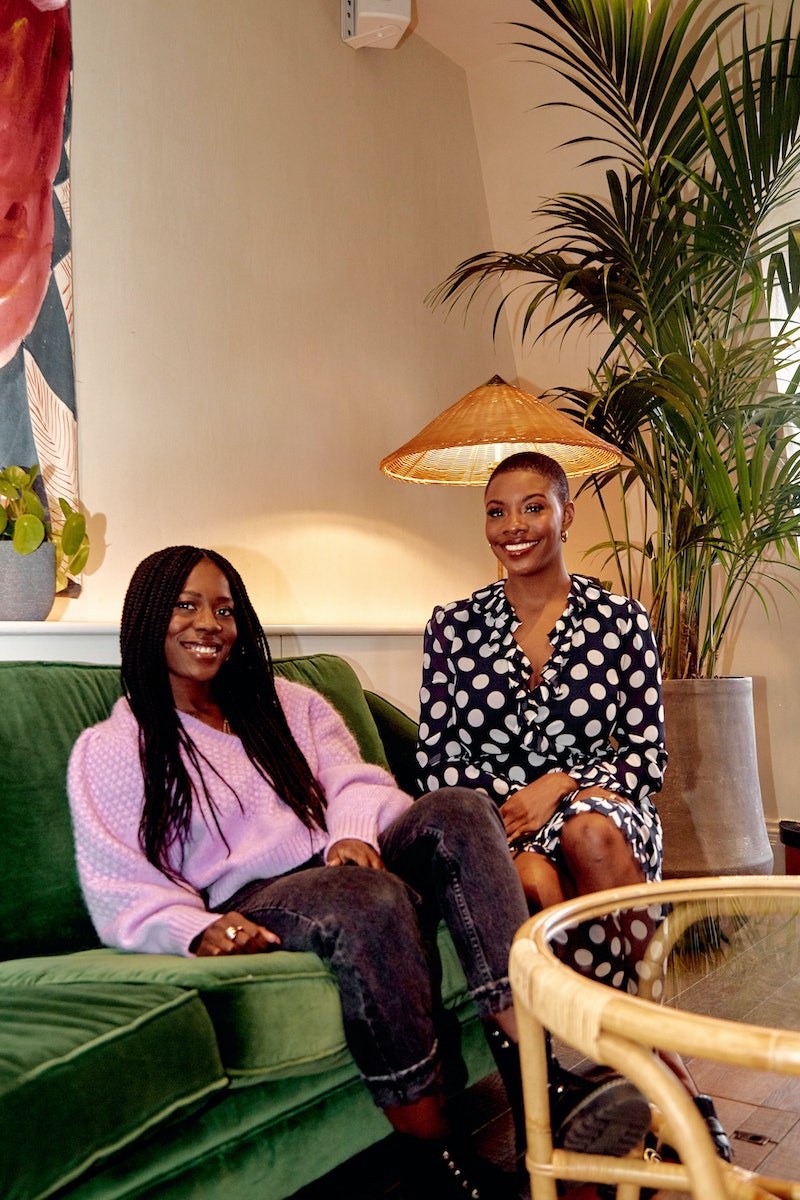 Diversity is very few and far between in the literary space, especially for children’s books. While many of us grew up with authors like Malorie Blackman, Meg Cabot, and Jacqueline Wilson, few books have offered an authentic representation of being a young Black girl in the UK today. Authors Yomi Adegoke and Elizabeth Uviebinené, the two brains behind Slay In Your Lane and Loud Black Girls are aiming to break that glass ceiling with their latest and debut fiction book for middle-grade readers.

The Offline Diaries, published by Harper Collins, is a heartwarming story about friendship, falling out, and unforgettable characters that will resonate with all readers from nine and up. Harper Collins describes it as “a fresh, funny and contemporary story of friendship.”

The story follows two year eight girls, Ade and Shanice. Ade is about to start at a new school, and she isn’t happy with her stepdad for making them move house. Shanice has been at the school for a year already, and she’s been living with her dad and annoying younger brother, and has mostly been spending her time at her dad’s salon. When Ade and Shanice meet at the salon, an instant friendship is formed, and they start to chat online. What follows is a rollercoaster of a friendship between two teenage girls and the highs and lows they have to contend with.

Ahead, we caught up with Yomi Adegoke on Zoom about why The Offline Diaries offers important representation to young Black British girls, and what they hope readers will take from it.

Jessica Morgan: Congratulations on the publication of The Offline Diaries. How do you feel now that the book is out in the world?

Yomi Adegoke: I’m so excited. I feel like me and Elizabeth have done this before, with Slay In Your Lane and Loud Black Girls, but this was for the kids. It’s just a different energy because we’re a completely different demographic to them.

J: What made you want to write a book for children?

Y: After we wrote Slay In Your Lane, we had a lot of requests from people asking us to write one for kids. But neither of us have kids because at the time we were 25. We didn’t know anything about kids! We were super new to the industry and people kept asking us to write books for this group, that group. Then we had people asking whether their 10-year-old could read Slay In Your Lane, and I mean, we obviously care about sales but that book is all about systemic racism and is for an older audience.

J: So neither of you have kids. So where did you get all the information from?

Y: It’s so funny because Elizabeth has younger siblings, but I don’t know any kids. I only have my three-year-old Godson. And even trying to write this book, we had to get into the right mindset and think back to what we were thinking about when we were in year eight. Obviously, Elizabeth would ask her siblings, “So, like what’s the tea?” and they’d just be honest with her and be like, “No, that’s completely wrong”. Whereas with me, I cannot ask my Godson. He’s three and cannot speak.

I went to a predominantly Black primary school in Croydon. And I lived in constant fear of being happy slapped [laughs].

J: What did you do then?

Y: I had to really take it back to when I was that age, between eight and 12. I had to think about what I was reading at that age, which was mainly Malorie Blackman, Meg Cabot, and Jacqueline Wilson. I was a big Jacqueline Wilson fan and there was a real universality to her writing. Especially when you grow up and realise that some of the themes she worked with were quite complex, but not necessarily noticeable when you’re that age. So I had to really take myself back to what I liked about kids books and worked from there.

J: I enjoyed the fact that race isn’t a focal point of the book.

Y: Elizabeth and me are best friends, so we wanted the overarching theme of friendship, but most of all we wanted representation. We wanted kids to see themselves and feel empowered. We wanted two young Black girls, one from a Caribbean background and the other from an African background. And we wanted them to just do what matters to kids. Which is all about friendship, sleepovers etc. And we wanted kids outside of the Black community to read that and be like, “Oh, okay. Yeah, this is normal, because Black people exist.”

J: What was life like for you when you were in year eight?

Y: I went to a predominantly Black primary school in Croydon. And I lived in constant fear of being happy slapped [laughs]. I always wanted to sit on the top deck of the bus, but that got dropped very quickly when happy slapping became a thing. That was my only fear. Back then we didn’t have social media as much as we do now. We didn’t have to worry about things going viral and the whole world seeing us, which kids have these days. Being happy slapped was the only thing I was really scared of.

Most of all we wanted representation. We wanted kids to see themselves and feel empowered.

J: Talk to me about Back Chat

Y: Backchat which is the messaging service, like WhatsApp, that we created in the book, and we were thinking of all the ways you can mobilise cyber bullying on social media. I know adults have severe anxiety because of social media, but it does affect younger people and their self-esteem. We wanted to do something around these themes and counter the argument that of “Oh, it’s just online. It’s not the real world” because that argument hasn’t rang true in the past decade. So we wanted a storyline of having their friendship in an online space, and how that permeates in real life at school.

J: Sisterhood is also an overarching theme. What does it mean to you?

Y: Elizabeth and I met when we were 18. So while we’re a lot older than Ade and Shanice, those years were still very formative for us. We have literally experienced everything together to the point where Elizabeth is celebrating her birthday soon, and she’s invited my parents. It was a dream to write Ade and Shanice. Elizabeth wrote Shanice’s perspectives, and I wrote Ade’s. We are very similar, but very different. Had we not met, I’m not sure if our lives would look like the way they do now. I remember meeting Elizabeth for the first time and she was like, “Oh my god, I don’t have time for anyone!” She was on her own vibe. But my gut was genuinely like, “I need to persist in this friendship. I actually want to be her friend.” I don’t know why that happened, but I’m glad it did. I’m very lucky to be able to do this with my best friend.

J: So you’re Ade, and Elizabeth is Shanice?

J: At least in the technical writing side of it. But in terms of personalities, there’s a bit of Shanice and Ade in both of us.

The Offline Diaries by Yomi Adegoke and Elizabeth Uviebinené is available to buy at all major bookshops now.