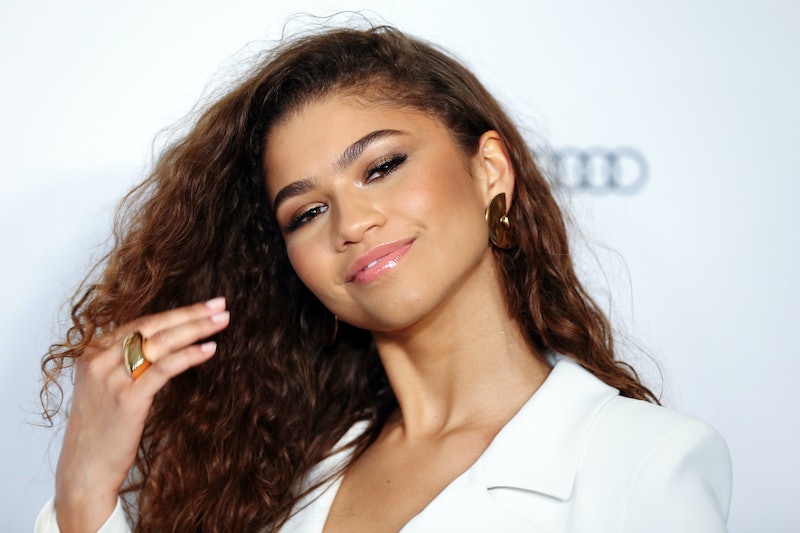 Zendaya has always been outspoken about the issues and movements that are important to her, but despite all of her hard work, the actor and producer doesn't plan on adding "activist" to her list of job titles. While speaking with InStyle for their September cover issue, Zendaya revealed she doesn't consider herself to be an activist, because she doesn't think she is "deserving" of such a title.

In a discussion with Black Lives Matter co-founder Patrisse Cullors — who took over Zendaya's Instagram account on July 4 in order to open a dialogue about the BLM movement and anti-racism — about her work with the movement, Zendaya revealed that she sees true activism as a "lifestyle" and not just a hobby. "I have always hesitated to use the word "activist" for myself. That is a lifestyle," she explained. "That is a choice every day to be doing the work and devoting your life to a cause. And I don't feel I am deserving of the title."

Instead, the Euphoria star said that she feels there are "much better" words to describe who she is and what she does with her platform. "I'm an actress, but I'm also just a person who has a heart and wants to do the right thing," the actor continued. "I care about human beings, so this time is very hard to talk about. It's painful," Zendaya said of the ongoing Black Lives Matter movement and the recent protests against police brutality that were inspired by the death of George Floyd.

During the interview, Zendaya recalled fearing for her father's life after two unarmed Black men were murdered by police in 2016. "I remember when I was with my dad in Atlanta shooting the first Spider-Man movie, and it was around the time that the murders of Philando Castile and Alton Sterling happened," she recalled.

"I was extremely emotional, and I remember thinking about my dad, who was out picking up food at the time. I started worrying and calling him like, "Are you OK?" I didn't want him to go out and do anything," she continued. Though she acknowledged that her father is "a 65-year-old Black man," who has experienced quite a lot of injustice in his lifetime, the experience affected her. "I still had that fear, and that scared me," she admitted.

Despite that fear, Zendaya explained that it's important to her to be honest and open with her fans about everything she's feeling and fighting for, in order to star an open dialogue that will hopefully inspire change. "For me, it's important not to entirely give up hope and faith in humanity," she explained. "A lot of young people feel like the system has never worked for them, so why should they even bother? If there is anything positive that has come out of this time, it's that I feel a little bit of hope too. There are changes happening."

The star also noted that she is particularly inspired by "my peers and their commitment," as well as seeing her 15-year-old cousin speak up about injustice and fight for change. "Clearly there is hope in the youth. That makes me want to keep going," the actor stated. "And more than anything, I just want to tell people that your voice does matter. The little things do matter. And continue to use your emotions. They are sometimes considered a weakness, but in this time they are very powerful." Activist or not, Zendaya is doing her part to make sure change is coming.

More like this
How Andrea Riseborough Got Nominated — & Almost Disqualified For An Oscar
By Jake Viswanath
Beyoncé Just Announced Tour Dates: Here's How To Cuff Tickets To Her 2023 Shows
By Jake Viswanath
RHOP’s Robyn Dixon Explained Why Juan Paid For Another Woman's Hotel Room
By Brad Witter
Cardi B, Olivia Rodrigo & More Will Present At The 2023 Grammys
By Jake Viswanath
Get Even More From Bustle — Sign Up For The Newsletter
From hair trends to relationship advice, our daily newsletter has everything you need to sound like a person who’s on TikTok, even if you aren’t.